The timing of Operation Northern Shield, to destroy Hezbollah tunnels leading from Lebanon into Israel, suggests that considerations other than security were behind the decision to launch it. 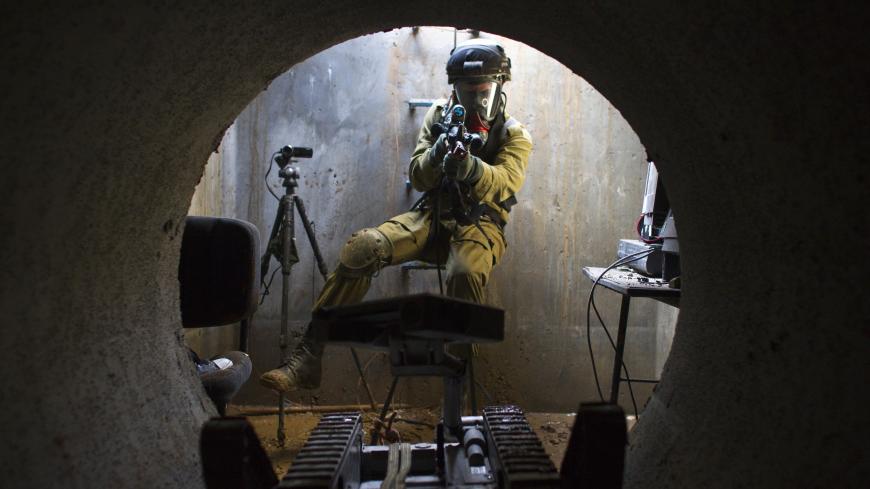 An Israeli commando from Yahalom, an engineering unit, takes part in a tunnel-hunting drill near Tel Aviv, March 7, 2012. -

Prime Minister Benjamin Netanyahu delivered a speech to Likud activists on Dec. 2 that was both defensive and combative toward law enforcement authorities. He complained about the supposedly suspicious timing of the police announcement recommending his indictment for taking bribes in Case 4000, coming as it did one day before Police Commissioner Roni Alsheikh concluded his term in office.

Barely 48 hours later, on the morning of Dec. 4, the Israel Defense Forces (IDF) announced the launch of Operation Northern Shield to locate tunnels dug by Hezbollah along the Lebanese-Israeli border. Along with relevant remarks about the actual operation, quite a few commenters joked and wondered about its timing.

“Operation Bullshit” was how one commenter described it. Another ridiculed it as “Operation Balfour Street,” a reference to the address of the prime minister’s residence, and someone else dubbed it “Operation 7000,” the sum of the criminal investigation case names against Netanyahu — Cases 1000, 2000 and 4000. This last comment was in response to an analysis published Dec. 4 in Haaretz by military correspondent Amos Harel, who wondered whether the move was nothing more than an “Operation Grandma,” referencing a satirical cult movie about Israel’s obsession with defense.

None of those ridiculing the timing of Operation Northern Shield expressed any doubt about the need to destroy the tunnels dug by Hezbollah to infiltrate Israel, but the operation does raise quite a few questions and doubts that are hardly amusing.

It turns out that the IDF has long known about Hezbollah's cross-border tunnels. A senior military source told reporters that Israel knows all about the Hezbollah project and is aware of every one of its tunnels (in the IDF's estimation). Interestingly, the operation has so far exposed only one such tunnel, despite the great fuss.

The timing issue is not the only indication that the decision to expose and block the tunnels involved considerations other than security. The code name “Northern Shield” lends the impression of a defensive operation of paramount importance, which it does not appear to be. Added to that is the media circus the likes of which has not been seen on Israel’s northern border since the Second Lebanon War (2006), complete with live news updates throughout the day, as if there were some sort of emergency.

And let us not forget that it all began with Netanyahu’s “urgent” dash to Brussels on the evening of Dec. 3 to meet with US Secretary of State Mike Pompeo. Netanyahu’s office, instead of issuing a laconic announcement about what was essentially a working meeting, volunteered that the prime minister had taken off urgently “to discuss a defense-related development linked to Iran.” Did Netanyahu fly all the way to Brussels to get the go-ahead for an operation to locate tunnel openings within Israel’s sovereign borders?

The photos from the northern border on the following morning raised even more questions. The IDF deployed a few bulldozers and some digging equipment for the type of activity that it has carried out dozens, if not hundreds, of times along the Gaza border over the past two years. Down south, the IDF destroyed Hamas' flagship tunnel project without fanfare, without long-winded declarations, without pounding the drums of war, and certainly without leaks to the media about an urgent overseas meeting.

Also in the case of the Hezbollah tunnels, the IDF actually added to the hype when it announced the “re-deployment of artillery and call up of reserves.” As far as anyone knows, however, the tunnels up north are not a flagship project for Hezbollah, especially when compared to the importance Hamas accorded its tunnels. Hezbollah's primary efforts are focused on other military strategies.

A war-like atmosphere — featuring attack tunnels, an emergency operation, a call up of reserves, convening of the Security Cabinet — was created and then underscored by Netanyahu with a special broadcast to the nation on prime time, evening television. Media events of this kind, designed to convey to the public that things are under control, usually take place in times of war or after a multiple-victim terror attack.

Surprisingly, the IDF went along with it all. Such military operations are typically complex, sensitive, and dangerous. Secrecy is generally preferable to beating the drums of war. The dramatic declaration about the launch of widespread military operations and creating a false impression of a major force deployment along the northern border could have been interpreted as a (needless) declaration of war against Hezbollah. So far, Israeli troops have not stepped an inch into Lebanon, but the declarations and announcements, including about mobilizing reserves, led Hezbollah to declare a state of readiness. Who was it that the IDF had sought to scare? Hezbollah or perhaps the Israeli public?

As noted, the IDF has thus far exposed only one tunnel. It could have been cemented shut and reported as a successful, one-off operation. Netanyahu, however, wanted (and got) a full-scale television performance out of it to help him rehabilitate his image of being strong on defense, after it was tarnished by his decision to accept a cease-fire deal with Hamas rather than get drawn into a war in Gaza. The agreement drew harsh criticism from Netanyahu’s political base. Since Netanyahu will have to hold elections some time in 2019, he is now trying to rebuild his “Mr. Security” image as an indispensable minister of defense.

In a bid to forestall HaBayit HaYehudi leaving the governing coalition after the Nov. 14 resignation of Defense Minister Avigdor Liberman over the Hamas cease-fire, Netanyahu called a news conference on Nov. 18 and hinted that Israel was facing a security threat, the nature of which he could not divulge. In the midst of a security campaign, said Netanyahu, “You don’t play politics.” In his case, however, it appears that all means justify the end, even if it requires launching an Operation Grandma or Operation Bullshit to rehabilitate one's image.

Even in an amusing video produced for Hanukkah, the Prime Minister's Office portrays Netanyahu more as defense minister than the leader of the country. The clip shows him walking into a bakery, where there is a long line to buy Hanukkah donuts. While waiting his turn, he goes on about his diplomatic successes and the economic progress Israel has made. The video ends with a “humble” request by one of the customers — a “selfie” with the minister of defense.

Netanyahu will probably only call elections after he feels his supporters have forgiven him for the Hamas cease-fire and view him as an indispensable defense minister. Efforts to restore his image are legitimate political moves. What is not acceptable and is even dangerous is to launch a military operation that could have been conducted differently — without using soldiers and bulldozers as props for the defense minister to stage an operation to expose tunnels and conceal criminal investigations.