How insecurity in Iran's southeast could benefit UAE, Pakistan

Regional rivalry over maritime trade has intensified speculations in Iran about possible Emirati-Pakistani involvement in the recent terror attack in the southeastern port of Chabahar. 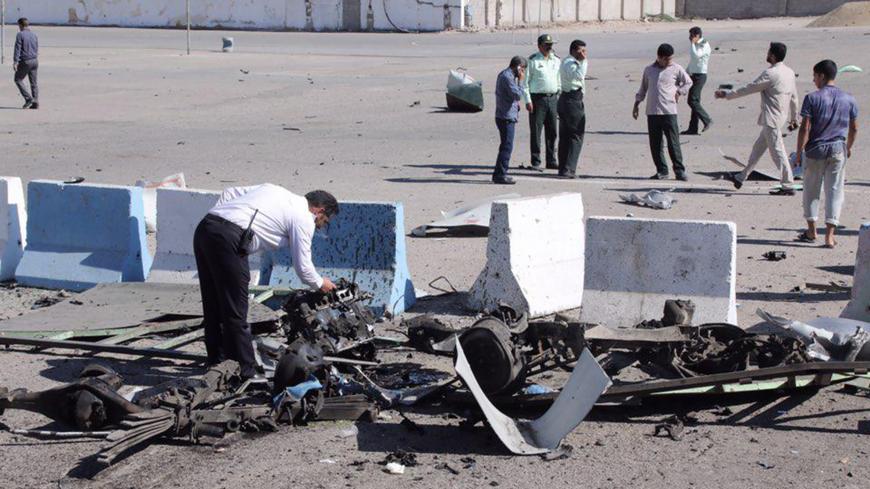 A policeman inspects the wreckage of a car bomb that exploded in front of a police station in the city of Chabahar, Iran, Dec. 6, 2018. - STR/AFP/Getty Images

Iran was hit by yet another terrorist attack on Dec. 6. This time, a rare target: the strategic port city of Chabahar, where a suicide attack on a police station killed four and wounded 42. Located in the southeastern Sistan and Baluchistan province, the 1,200-acre port with 10 active berths lies on the coast of the Gulf of Oman. It is Iran's sole oceanic port, bridging the country to the Indian Ocean via the Gulf of Aden and the Arabian Sea.

But Chabahar also holds significant value for Afghanistan and India. This shared regional importance brought together the three countries' presidents in Tehran in May 2016 to ink a deal in which New Delhi pledged $500 million in investments to develop the port. The project was meant to facilitate India's access to Afghanistan and Central Asian markets, bypassing neighboring foe Pakistan, which is not on good terms with the Afghan government.

Pakistan, on the other hand, is pursuing an agenda of expanding ties with India's leading regional competitor, China. To do so, Islamabad has attracted Beijing's investment to its Gwadar Port, which lies within 76 nautical miles of Chabahar.

Following the agreement in Tehran, the Indian investments started flowing. During a February 2017 visit by Iran's Hassan Rouhani to New Delhi, the Indian government also agreed to manage certain parts of Chabahar Port for 18 months. In June 2017, Indians expressed hope about operating the port by 2019. That, however, coincided with growing concerns over implications of the US pullout from the Joint Comprehensive Plan of Action, including the reimposition of sanctions. This fueled fears about a complete Indian abandonment of the strategic port.

India sighed in relief after US Secretary of State Mike Pompeo announced a sanctions exemption on New Delhi's development project in Chabahar, effectively giving Iran the chance to keep its business running by playing host to the transit of Indian cargo to Afghanistan and Central Asia. This has also opened up a window of opportunity for the Sistan and Baluchistan province, which, according to official statistics, suffers Iran's highest unemployment rate.

Aside from its special economic value, Chabahar is strategically important in that it lies far enough from the Strait of Hormuz to remain immune from constant Persian Gulf crises. The port could also potentially emerge as a rival of Dubai, since, in the long run, regional economic competition is expected to tilt eastward from the Strait of Hormuz to the Gulf of Oman and Bab el-Mandeb. A new regional maritime balance could be on the horizon, with Dubai on one side and Iran's Chabahar and Pakistan's Gwadar on the other.

There has been speculation about what role the United Arab Emirates will play. The UAE's Dubai Ports World (DP World) has turned into a giant of international port management. The firm runs some 80 thriving ports worldwide, including the Jebel Ali Port, which stands head and shoulders above all Middle Eastern ports in terms of cargo volume.

The UAE's widespread port control does not end there. In 2008, DP World signed a 100-year contract to renovate and supervise operations in Yemen's Aden, paving the way for the Emirati government's influence in the country. With the war in impoverished Yemen raging on, the UAE now effectively controls much of Yemen's south.

The development of Iran's Chabahar, therefore, could adversely affect business in Dubai as well as in Pakistan's Gwadar. Within that context, it came as no surprise that a tweet from Iran's Foreign Minister Mohammad Javad Zarif after the attack implicitly implicated the UAE and promised action. "In 2010, our security services intercepted & captured extremists en route from UAE," he wrote. "Mark my words: Iran WILL bring terrorists & their masters to justice."

Situated on the volatile Pakistani border, Iran's Sistan and Baluchistan province has witnessed numerous terror attacks carried out by a host of militant groups in recent years. Some of those groups have been busted by the Iranian intelligence apparatus, but they keep regrouping to commit fresh violence, including the Chabahar attack, for which Ansar al-Furqan claimed responsibility.

According to Fars, a semi-official news agency close to the Islamic Revolutionary Guard Corps, the group came out of a merger between Harakat Ansar Iran and Hezb al-Furqan in 2014. The two groups are affiliated with the Pakistani Taliban, and have engaged in cross-border operations in pursuit of their separatist agenda. Iranian authorities have accused the UAE and Saudi Arabia of funding and arming anti-Iran militant groups.

"The development of Iranian and Pakistani ports is perceived by the UAE as a threat to its monopoly over the Persian Gulf," Siavash Fallahpour, Arab world affairs analyst, told Al-Monitor. On the UAE role in the Yemen war, Fallahpour said, "Ever since the [Saudi-led] coalition took control of Aden, Abu Dhabi has been setting up its military wing in Yemen, which has practically crippled Abed Rabbo Mansour Hadi's government."

Fallahpour further argued that when Aden was expected to serve as the interim capital for the Hadi government, when it had to fight to retake Sanaa, the UAE engaged in sabotage. "It resorted to terror operations against Hadi forces in a bid to bring southern Yemen under its full control and expand its own access to free waters well beyond the Persian Gulf," he said.

Given the UAE and Pakistan's shared interest in blocking Chabahar development and sabotaging India's investment, a terrorist attack in the strategic port could serve the right purpose. It now remains to be seen how Tehran will optimize the development of the port, an opportunity that has emerged thanks to the strategic goals it shares with New Delhi and Kabul.