The controversy over the key to the Church of the Holy Sepulcher in Jerusalem’s Old City says more about the lack of political leadership in Jerusalem than about the current custodian's suitability for the role. 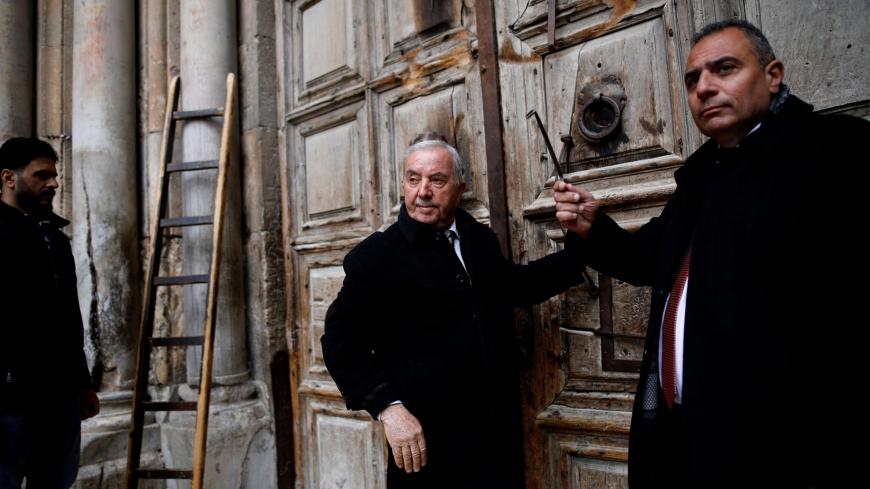 Adeeb Joudeh (R) and Wajeeh Nuseibeh, Muslims who say their families were named the custodians of the ancient key to the Church of the Holy Sepulchre, prepare to open the church doors on the morning of Good Friday in Jerusalem's Old City, March 30, 2018. - REUTERS/Corinna Kern

A Jerusalem family that holds the keys to the Church of the Holy Sepulcher is resisting community and political pressure to relinquish them. Adeeb Joudeh al-Husseini, who says his family was granted the keys in the 12th century, told Al-Monitor there is no reason he should give them up. The key holder says his family's custodianship dates back to the time of Saladin, the Muslim leader who liberated Jerusalem.

Reuters ran a long article late in 2017 explaining that the key was given to the Joudeh family after the city was liberated from the Crusaders in 1187. Another of the city’s oldest Muslim families, the Nusseibehs, was entrusted with the duty of opening and closing the church doors, a task they perform to this day.

But if local Palestinian politicians have their way, the keys will be stripped from Adeeb and given to another member of the Joudeh family. Minister of Jerusalem Affairs in the Palestinian government Adnan Husseini told Al-Monitor that considering problems involving Adeeb's home, it would be best if the symbolic keys to the church were no longer with him. “What happened with his family home can't be ignored,” he said.

Adeeb, whose family home in the Old City of Jerusalem ended up in the hands of the extremist Jewish organization Ateret Cohanim on Oct. 3, told Al-Monitor that he should not be blamed for it.

Adeeb, 55, said he was honored to have received the keys from previous generations of his family and would never give them up. “My father had the keys and his father before him, and I will gladly turn over the keys to my oldest son in due time, as has been the tradition in our family.”

But at the same time, Adeeb is adamant about his innocence of the accusations leveled against him, saying, “I sold our family home to a respected Palestinian businessman who was recommended by officials from the Palestinian Authority and local leaders.”

Records do in fact show that the house was sold to a Palestinian banker named Khaled Attari who has since disappeared, but it is unclear how the house ended up in the hands of the extremist Jewish group. Palestinian Prime Minister Rami Hamdallah has set up a committee to look into what happened.

Hanna Issa, the head of the Islamic-Christian Commission in Support of Jerusalem and Holy Sites, told Al-Monitor that he would prefer if the keys of the holy church were transferred to another member of the Joudeh family but he doesn’t agree to any change in the status quo, in which the current understandings of who owns or administers these holy sites continue as they have been for decades.

Amira Hanania, who is the director general of the Palestinian government's Higher Committee for Church Affairs, told Al-Monitor that the issue of transferring Palestinian homes to settlers is very worrisome. “While we don’t want to change the status quo regarding holy places in Jerusalem, we can't sit idle as these issues happen in the Old City. The public is very angry about what happened to the Joudeh home.”

A petition signed by 15 members of the Joudeh tribe Oct. 28 called for the transfer of the keys to another member, Loai Said Joudeh.

But Adeeb's brother Sari Joudeh, a systems analyst working in Qatar, said that the petition comes from a Jaffa-based family who has the same name but is not related to his. Speaking to Al-Monitor by phone, Sari explained that his family comes from the Ghadieh tribe of Joudehs. “The Joudeh Ghadieh family supports Adeeb and we will not accept any change to who possesses the keys to the church.”

Sari added that the other family has coveted the historic key for years and is using the current circumstances to try to get possession of it. “But we have documents and fermans [an Ottoman term for official edicts] that prove that our particular family is the proud owners of the key which we have the honor to keep.”

Historians have made much of the fact that a Muslim family has the keys to the Christian church and see the situation as reflective of the churches' trust in their fellow Jerusalem Muslims.

Palestinians praised Adeeb when, in December 2017, he refused to open the Church of the Holy Sepulcher in Jerusalem for US Vice President Mike Pence after the United States moved its embassy from Tel Aviv to Jerusalem.