Prime Minister Benjamin Netanyahu must prove to the Israeli public that his decision to accept a cease-fire with Hamas and advance an arrangement could actually bring about quiet to the south. 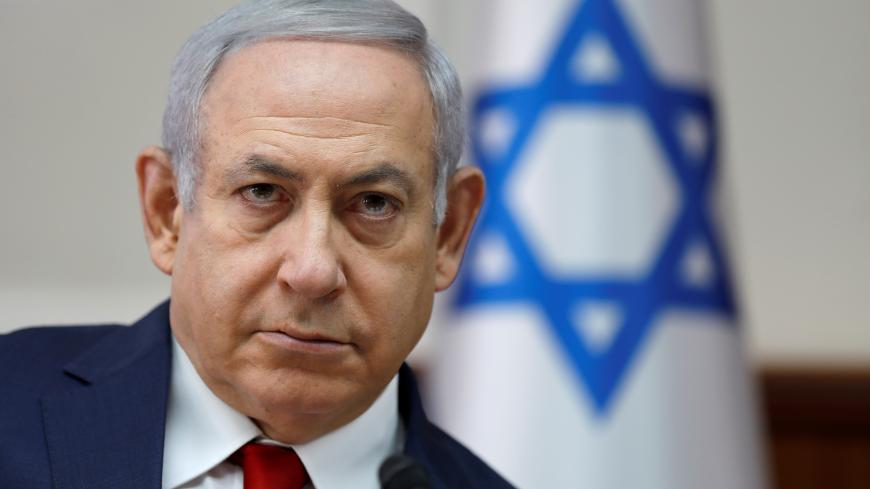 While Prime Minister Benjamin Netanyahu didn’t want to go to war in Gaza, he is paying a political price for that. Had he not promised Israelis that he would come up with some magical solution to the problem of Gaza, he may never have found himself caught in this trap — or at least he would not have emerged so hurt. But even after Education Minister Naftali Bennett reneged on his threats to resign and agreed to remain part of a narrow right-wing government, at least for now Netanyahu is still left with negotiations on an arrangement with Hamas, which would be hard for him to implement.

Just two days after Defense Minister Avigdor Liberman handed in his resignation, Hamas Gaza leader Yahya Sinwar — whom Netanyahu released from prison in 2011 as part of the Gilad Shalit deal — appeared in Khan Yunis, waving a pistol with a silencer. He claimed it had been taken from a member of the Israeli special forces unit, which was discovered recently in Gaza. Gun in hand, Sinwar boasted on Nov. 16: “What did the Israeli leadership think when it allowed in fuel and Qatari funds to pay the salaries of government workers and to help needy families? That we would sell our blood for diesel and dollars? They’ve been disappointed, and their goals have failed."

With these comments hovering in the background — and given recent political developments in Israel — several questions must be asked: Will Netanyahu allow another suitcase stuffed with money to get into Gaza next month — after authorizing the transfer of $15 million to Gaza on Nov. 11 — and thereby face another humiliating photo? As part of his arrangement with Hamas, will he agree to open the border crossings and allow thousands of day laborers from Gaza to enter Israel — and in doing so, face even more public criticism? Given his narrow government, will he be able to deliver on the arrangement as if some 500 rockets hadn’t been fired at Israel in just two days? Can he ignore the polls, which show that most Israelis believe he has failed in handling the security crisis in the south?

Netanyahu uses the polls on an almost daily basis to assess “the mood of the country” and check the percentage of support he has. A survey by Israel's Hadashot TV, released after Liberman’s resignation Nov. 14, found that 74% of respondents were unhappy with Netanyahu’s handling of the Gaza issue. Meanwhile, though Liberman’s party, Yisrael Beitenu, was hovering around the electoral threshold to get into the Knesset before this, the current poll gives them two additional seats. The Likud won 30 seats in the last election, and previous polls gave it as many as 35 seats — with Netanyahu’s own goal for the next election being 40 seats. Now, the Likud is given just 29 seats. In other words, not only did its target of 40 seats seem further away than ever, but given this week’s mood, it is doubtful whether the Likud will be able to maintain its current strength.

Before Bennett could announce whether he would resign or remain in the government, Netanyahu used a press conference on the evening of Nov. 18 to boost his reputation as “Mr. Security.” He said: “I was a fighter and commander in the Matkal commando unit. I lost brothers in arms. I lost my brother Yoni. I almost lost my own life at Suez, during the Attrition War. I was wounded in the operation to release the hijacked hostages on the Sabena flight. I put my life at risk time after time to ensure that we could continue to live here in the Land of Israel. … Much of the criticism stems from the fact that it is impossible to present the whole story to you as it is seen by the chief of staff … [Israel Defense Forces] generals, Shin Bet director, Mossad director and me. The reasons for that are totally understandable.”

In an effort to defend his decision to avoid launching a devastating attack on Hamas, Netanyahu explained that “together with the security chiefs, I see the general picture of Israel’s security. … The public sometimes cannot be a part of decisive considerations. These must be hidden from the enemy,” especially since the campaign “is still being waged.”

The security situation in Gaza is, in fact, complicated. Egypt’s attempts to mediate an arrangement have continued for many long months already. During the rounds of talks and potential obstacles, there were also rounds of armed conflict, which included the firing of rockets at Israeli localities along the Gaza border. Each of these rounds of violence ended with the intervention of Egyptian mediators and a cease-fire. Last week, following the discovery of the Israeli special forces unit operating in Gaza and the ensuing gunfight in which Lieutenant Colonel M. and seven members of Hamas were killed, Hamas responded particularly strongly. This was the organization’s most massive response since 2014's Operation Protective Edge. Still, Netanyahu just bit his lip, ignored the battle cries of his ministers and reached another cease-fire behind their backs.

The criticism he faced for this was severe. Was it possible that a political augur like Netanyahu finally failed to read the signs? Could he not have foretold that his government would be in danger of falling as soon as Israelis concluded that Hamas had gone too far? Did he not realize that his self-restraint would be interpreted as weakness and that he would have to pay for that politically?

It is not yet clear what far-reaching campaign the prime minister meant during his press conference. He might have meant that significant progress has been made in negotiations to reach an arrangement or that Palestinian President Mahmoud Abbas agreed to lift his opposition to a Gaza arrangement and would henceforth assist Egyptian efforts at mediation.

Netanyahu recently received clear messages from Egypt that Abbas succumbed to pressure from Egyptian President Abdel Fattah al-Sisi. A Palestinian source told Al-Monitor that Abbas realized his opposition to an arrangement would lead to war between Israel and Hamas with thousands of Palestinian casualties, and that he would ultimately be blamed for their deaths.

In its second stage — after agreeing to a cease-fire and to open crossing points — the agreement between Israel and Hamas should see the return of the bodies of two Israeli soldiers, Oron Shaul and Hadar Goldin, being held by Hamas, as well as the release of Israeli citizens Avera Mengistu and Hisham al-Sayed, who are being held in Gaza.

Egyptian sources recently leaked to the Arab media that there has been considerable progress on a deal to release Palestinian prisoners held by Israel. The impetus for this, these sources claimed, was Israel’s agreement to free Hamas prisoners, who were originally released in the 2011 Shalit deal and were arrested again upon the outbreak of Operation Protective Edge.

If the reports are accurate, Netanyahu could have avoided the public’s impression that he acted weakly and gave in to Hamas. One word from Netanyahu about the emerging deal could have embarrassed the resigning defense minister and won the prime minister widespread public support. Now, Netanyahu is forced to contend with a damaged image as “Mr. Security." He will have a hard time moving forward with the arrangement until Israelis see the whole picture. That is, of course, unless Hamas decides to fire hundreds of rockets at Israel again.

Sinwar claimed that Hamas received the Qatari funds without selling out its principles or losing its capability for deterrence against Israel. Now it is up to Netanyahu to prove to Israelis that despite his restraint policy, he did not sell out his principles. He agreed to reach an arrangement with Hamas so that he could get the bodies of Israel’s fallen troops back, bring about the release of Israelis prisoners in Gaza and safeguard the security of Israeli citizens.