As protests continue, residents of Iraq's Basra call for autonomy

Basra residents, who have been protesting to demand services and jobs, are disappointed with the new government for not appointing any minister from Basra and call for the establishment of a Basra federal region. 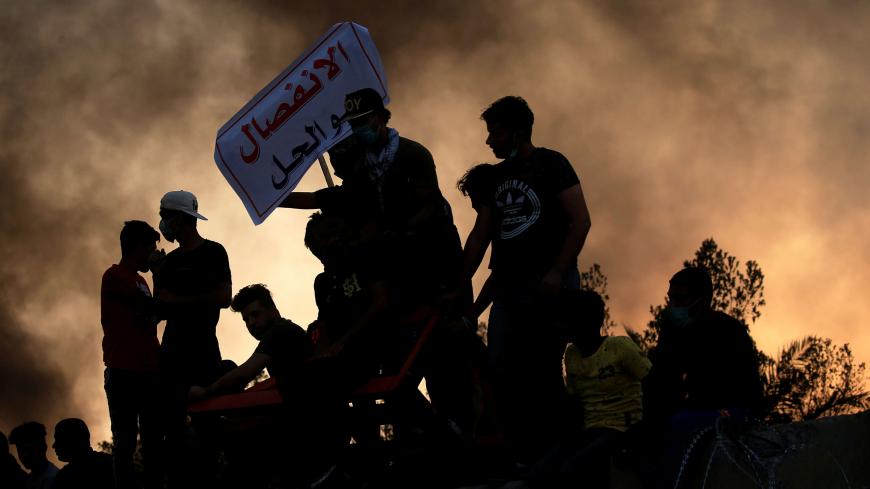 Protesters stand on concrete blast walls during an anti-government protest near the building of the government office in Basra, Iraq, Sept. 7, 2018. - REUTERS/Alaa al-Marjani

Anger is escalating in Basra over the new government's stance toward this strategic city and the demands of its people. The continued marginalization of this oil-rich city could spell a new round of unrest.

Voices have been calling for new protests and sit-ins in Basra in light of what activists describe as neglect of the province by the Iraqi central and local governments.

As part of their efforts to organize protests, Basra activists launched the Arabic hashtag that translates into “We are coming back for you.” They called on Basra’s residents to stage mass protests in front of the South Oil Company (SOC) on Nov. 4 and to prevent its employees from entering its premises.

Mahdi al-Tamimi, head of the Basra office of Iraq's High Commission for Human Rights, confirmed Oct. 31 the existence of a strong movement by all coordination committees in the province to stage protests.

Indeed, a protest took place Nov. 4 in front of the SOC. Protesters tried to prevent the entry of vehicles into the company’s premises.

Activists also insisted on organizing other protests. The Basra Protest Coordination Committees issued a statement Nov. 4 asking residents to take to the streets to put pressure on Baghdad.

A number of members of these committees met Nov. 5 with the governor of Basra, Asaad al-Eidani. The governor confirmed his support for the protests if they remain peaceful.

One of the reasons for the continuing discontent in Basra is the absence of any minister from Basra in the new government of Prime Minister Adel Abdul Mahdi.

Member of parliament Uday Awad said Nov. 5 that Abdul Mahdi has "disappointed” the people of Basra. On Nov. 6, Awad threatened more protests and sit-ins. “Abdul Mahdi will be given a chance to choose two ministers from Basra,” Awad said, warning of “the revolt of Basra citizens who have lost hope.”

Basra’s lawmakers not only warned of more street protests, but also threatened to oppose Abdul Mahdi's programs in parliament. On Nov. 5, Basra member of parliament Muzaffar al-Fadl called on the 22 MPs from Basra to break the quorum within parliament. He urged them to withdraw from the voting session on the eight vacant ministries.

Activists who organized mass protests in September disagree about returning to the streets. Several governmental and party headquarters were set on fire during the protests.

This time, activists question the usefulness of renewed protests. Activist Murtada Ali told Al-Monitor, “We took part in the previous protests. We supported them since they were staged to demand jobs and better services,” he said. “Today, protests have a political nature. They are being called in tandem with the formation of the government, and are linked to the government’s failure to appoint ministers from Basra.”

He went on, “When the previous protests were held the government included three ministers from Basra. One of them was handed the ministry of oil, the most important ministry in Iraq. What did these ministers do for Basra?”

Civil activist Mohsen Rahim told Al-Monitor, “Today's protests are an extension of September’s events. Basra’s youths feel they are being marginalized by the local authorities and the federal government. They feel they are being excluded from the government formation. Basra’s youths are calling for protests because no ministers from Basra are appointed in the new Cabinet.”

Calls for protests and sit-ins coincided with renewed claims for the establishment of a Basra federal region. For many years, popular groups and political parties in Basra have been demanding turning the province into a federal region similar to the Kurdistan region of Iraq.

Basra member of parliament Zahra al-Bajari announced Oct. 26 her support for the establishment of a federal region. Saying political blocs have not provided the entitlements Basra province is due, she asserted that a federal region is the best solution for the province.

Civil activist Mohsen Rahim told Al-Monitor, “We are protesting to demand our constitutional right to establish a federal region in the province of Basra within the borders of Iraq. We believe a federal region will provide a greater opportunity for the people of Basra to manage their affairs and address their crises.”

He added, “The Kurdistan region is an excellent example of the success of federalism in achieving progress and prosperity.”

Some figures in the executive branch also back the idea of establishing an autonomous Basra federal region.

On Nov. 4, the deputy governor of Basra, Muin al-Hassan, expressed his support for the movement demanding the establishment of a Basra federal region. “Basra province has substantial components enabling it to become a federal region. It has nine border crossings, a large oil terminal, seaports and huge financial capacities,” Hassan said.

But Hassan is aware of the strong opposition to such a project, especially in Baghdad. “The project of establishing a federal region in Basra is still in its infancy and needs great resolve. It also requires the support of major political authorities in Iraq.”