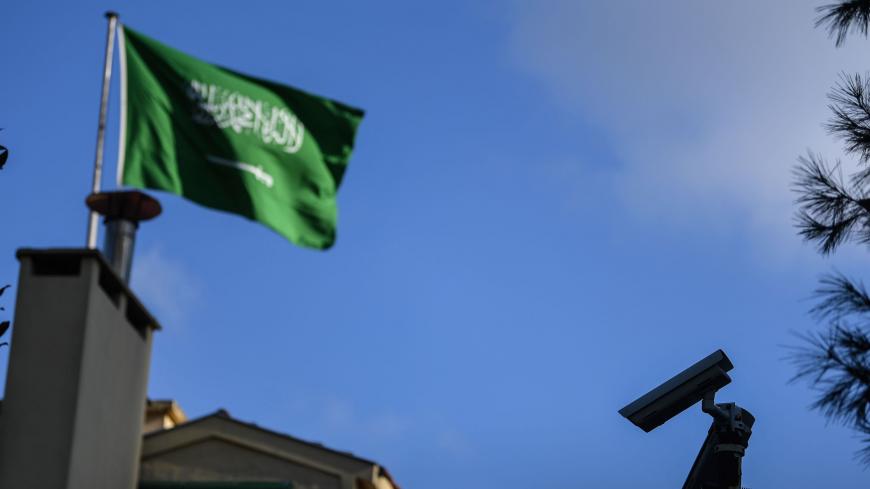 Turkish media today published images of an alleged intelligence team sent by Saudi Arabia to snatch dissident journalist Jamal Khashoggi in an apparent attempt by Ankara to turn up pressure on Riyadh to reveal the fate of the missing Washington Post columnist.

The pro-government daily Sabah splashed the pictures of 15 men, which it called an “assassination squad,” providing also their names and years of birth. The men, pictured at passport control, reportedly flew to Istanbul on Oct. 2 — the day Khashoggi disappeared into the Saudi Consulate in the city — and left later that day, using private jets. One of the men is said to be a senior Saudi forensic official. TV channels broadcast videos of what they said were the men arriving at the airport and checking into hotels, as well as footage of car traffic outside the consulate before and after Khashoggi’s disappearance, including a black van with blacked out windows that the police find suspicious.

Why it matters: The leaking of the images appears aimed at turning up pressure on Riyadh to reveal what happened to Khashoggi as the weeklong saga threatens to grow into a major diplomatic row between the two countries.

Unnamed Turkish police sources told the media over the weekend that they believed the journalist was killed inside the consulate, but Ankara appears to struggle in proving a murder or even an abduction, given the diplomatic shields the Saudis enjoy. Yet the Turkish side has released footage of Khashoggi entering the consulate, while the Saudis have so far failed to offer any evidence to back their claim that the journalist exited the building after picking up papers he needed for his forthcoming marriage to a Turkish woman.

In remarkably measured statements that made no mention of the murder claim, President Recep Tayyip Erdogan has expressed hope that Khashoggi would turn up alive and urged Riyadh to prove the journalist left the consulate.

With Turkish-Saudi ties already strained and its foreign policy plate too full for another crisis, Ankara appears wary of a diplomatic war with Riyadh, hoping instead that the Saudis will take the chance for an offramp. The lack of a strong response from Washington so far might have also discouraged Ankara from taking a harsher stance on Riyadh.

What’s next: As the two sides preserve the veneer of cooperation, Turkish investigators were widely expected to conduct a search at the consulate today after Saudi Arabia granted its permission. Yet no search had begun as of 6 p.m., and Turkish officials told a pro-government daily that the Saudi side had requested a postponement. The report did not cite a reason for the request, but any foot-dragging on the part of the Saudis will only reinforce suspicions that a crime is being covered up.

There are mixed signals on what course of action Ankara could take in the coming days. According to some reports, Ankara is considering the options of recalling its ambassador from Riyadh and expelling the Saudi envoy if the Saudis fail to provide a satisfactory explanation on Khashoggi’s fate “within several days.”

Yet Yasin Aktay, an adviser to Erdogan, wrote in a newspaper column today that “bashing Saudi Arabia is meaningless and useless” because “Turkey and Saudi Arabia are two nations that need each other.” Demanding an explanation on Khashoggi’s fate “does not amount to enmity” against Saudi Arabia, he wrote. Aktay also raised a rather peculiar scenario, in which rogue elements within the Saudi state could be responsible for the journalist’s disappearance.

Know more: Make sure to read our latest coverage about how Khashoggi's disappearance impacts Turkish-Gulf ties here, and check out Al-Monitor's Washington Pulse for more on the US reaction.