Is Erdogan aiming to end Turkey’s dream of EU membership?

Calling for a referendum on whether Ankara should end its bid for EU membership could shore up domestic political support for Erdogan ahead of crucial local elections in March 2019. 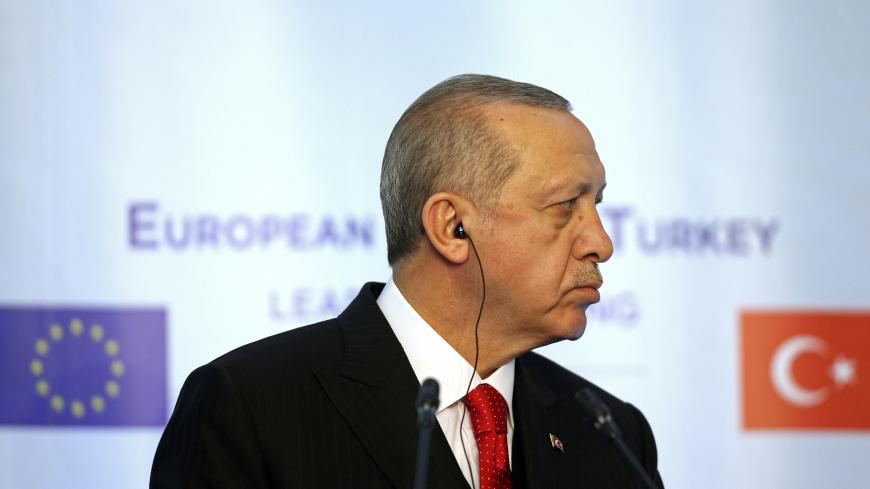 President Erdogan has renewed his call for a referendum to determine if Turkey will continue with its European Union (EU) membership talks or end them once and for all.

Addressing the TRT World Forum in Istanbul on Oct. 4., Erdogan said the EU has kept Turkey waiting for membership since 1963.

He said countries that had not fulfilled the EU’s “Copenhagen Criteria” on democracy and human rights had been fully admitted as members in the meantime in a show of leniency that was not provided to Turkey.

Indicating that there is nothing to show that Ankara’s membership path was open today, Erdogan called on the EU to come clean and declare whether it wants Turkey as a member.

Underlining that the EU was holding back from doing this too, Erdogan said, “Our duty then is to go to 81 million [Turks] and ask them. … As the leader of my party, my friend and I will bring the subject to the table, and the minute we say ‘OK’ [to a referendum], we will take the required step instantly.”

This has in fact been a hobby horse for Erdogan for some time now. He even called on Russian President Vladimir Putin in 2013 to help Turkey join the Shanghai Cooperation Organization so that Ankara could end its bid to join the EU.

Although Erdogan has called for an EU referendum in the past, he has not acted on this to date, leading many to assume that he is only engaging in political rhetoric.

Given the right alignment of factors in Turkey and Europe, though, Erdogan’s repeated calls for a referendum could turn into a self-fulfilling prophecy, especially since he has been courting nationalist quarters as much as religious ones to shore up his domestic support base.

Dumping the EU would mean little for these quarters, which — like Erdogan — have traditionally looked on Europe with resentment and suspicion. High EU standards on democracy and human rights — which are, technically speaking, prerequisites for membership — have also been seen by these quarters as traps designed to undermine state authority in Turkey.

Erdogan's referendum call is also at odds with some members of his administration. For instance, Foreign Minister Mevlut Cavusoglu underlined in an interview with the Greek Ta Nea newspaper in September that EU membership remains a “strategic choice” for Ankara.

“We see our future in the EU,” Cavusoglu said.

Some of Erdogan’s former associates in the Justice and Development Party (AKP), like former President Abdullah Gul, have supported Ankara’s EU membership bid because this has played a role played in pushing through reforms in Turkey.

For Erdogan, however, pushing for EU membership has never been part of his populist political platform. His anti-Western rhetoric, on the other hand, has brought him votes and great support from expatriate Turks in Europe.

Erdogan is a believer in the majoritarian approach to democracy as opposed to a pluralistic one, and he supports strong control over the country by the executive branch. He is aware that he would lose much of the political power he wields today under the EU’s democratic criteria.

Many believe it is his anti-democratic steps at home that pose as much of an obstruction to progress in Ankara’s EU membership talks as negative views about Turkey in Europe do.

Disingenuous as it may appear, Erdogan has nevertheless paid lip service to the notion that Turkey wants to continue with its EU vocation if it gets a fair deal from Europe. His policies, however, rarely point to a politician who is committed to securing EU membership.

In maintaining his current line on the EU, Erdogan relies on the culturally and religiously driven reluctance by key European countries like France and Germany to accept Turkey into the EU, even if Ankara fulfills all of the requirements for membership.

Burhanettin Duran, the general coordinator for the Ankara-based and government-funded Political, Economic and Social Research Foundation (SETA), believes Erdogan’s call for a referendum is his way of forcing the EU to recalibrate its strategic calculations regarding Turkey.

Duran argued in an article for the pro-government Sabah daily that Europe’s new policy on Turkey is based on ending tensions with Ankara and developing bilateral ties in order to continue cooperation on vital issues like trade and migration and thus keep Turkey tethered to the EU without admitting it as a member.

“I believe that Erdogan’s [referendum] message is the result of his opposition to this policy,” Duran wrote, going on to maintain that the existing situation with the EU cannot be sustained indefinitely.

Recent surveys in Turkey indicate that while there is still over 40% support for EU membership, the majority of Turks believe that Turkey will not get a fair deal from Europe.

This is why a referendum on Turkey’s EU membership bid is not likely to cost Erdogan much domestic support and might even be useful at a time when Turkey is heading for crucial local elections in March 2019.

Remarks by German politician Manfred Weber — who is currently vying for the job of president of the EU Commission — in which he stresses that he will end Turkey’s membership talks if elected also provide grist to Erdogan’s mill.

None of this means, of course, that Erdogan is turning his back on Europe. He appears more interested in shoring up bilateral ties with key European countries today than with pursuing EU membership.

His recent high-profile state visit to Berlin shows that key European countries are not unreceptive to his overtures in this regard.

There is also a technical cooperation infrastructure between Ankara and Brussels on vital issues like migration, terrorism and economic cooperation that has been built up over decades. This is unlikely to be dismantled if Turkey decides to end its EU membership talks.

Many also believe that ending Turkey’s membership bid will not mean that European companies lose interest in Turkey, even though they admit this could initially cause some economic turbulence.

Those who support this argument point to the economic opportunities the United Kingdom has been chasing in Turkey in recent months as it plans its post- Brexit future.

There are also those who believe that if Erdogan had been a Reformist leader, he would have had a much stronger hand against European politicians who are opposed to Turkey’s EU membership.

Retired Turkish Ambassador Oguz Demiralp lays a big portion of the blame for the current state of Turkish-EU ties on Ankara.

“We cut down on the work necessary for attaining EU standards. We regressed in terms of democracy, the rule of law, and human rights,” Demiralp wrote for the news portal T24 in a commentary on Erdogan’s call for an EU referendum.

“If we had made headway instead with regard to EU standards, which is also necessary for ourselves, then our hand would have been stronger against the EU,” he added.

Demiralp argued that European leaders would not have been able to obstruct Turkey’s EU path as they do today had Erdogan been keen on democratic reforms.

In order to bolster this argument, those who think like Demiralp recall that influential European leaders opposed to seeing Turkey in Europe, like former French President Valery Giscard d'Estaing, could not prevent the opening of formal membership talks with Ankara in October 2005 because Turkey appeared to be making headway in terms of reforms at the time.

Sedat Ergin, a seasoned foreign policy expert who writes for the daily Hurriyet, believes that ending Ankara’s EU bid could have dire consequences for Turkey’s ties with the West.

Ergin noted in his column that if Erdogan opts for a referendum, he is also likely to support ending EU membership talks.

“A possible result of the scenario in which [Erdogan] takes a position against full membership could be the serious loss of ground in Turkey’s Western perspective and the river bed being diverted to a different course,” Ergin wrote.

This, however, may be a moot point at this state, since Erdogan has not refrained from the kind of brinkmanship that has already undermined Turkey’s ties with the West.