Erdogan won't admit it, but Canal Istanbul dream is over

Canal Istanbul, the Turkish president's "crazy project," appears destined for the bin amid Turkey’s economic turmoil, but don't expect its shelving to be officially acknowledged. 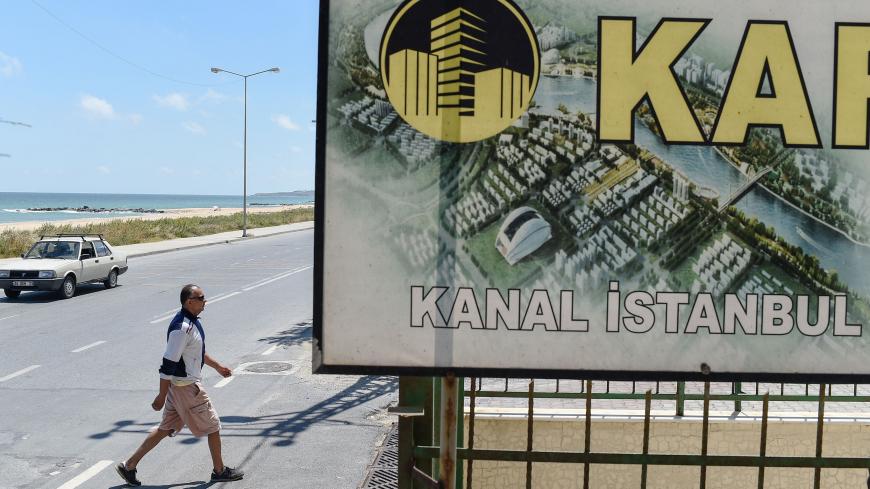 A real estate advertising offers apartments with a view of Canal Istanbul in the small coastal village of Karaburun, near Istanbul, Turkey, June 12, 2018. - YASIN AKGUL/AFP/Getty Images

Will President Recep Tayyip Erdogan go ahead with his “crazy project” — a $10 billion artificial waterway called Canal Istanbul — despite the economic turmoil gripping Turkey? The “official” answer is shrouded in uncertainty, but economists interviewed by Al-Monitor believe that an indefinite postponement is inevitable for the project, meant to link the Black and Marmara seas as an alternative to the Bosporus Strait, given the external financing hardships that Turkey faces.

According to government officials, the planned waterway aims to reduce safety risks for Istanbul by rerouting traffic from the tanker-clogged Bosporus and contribute to economic growth. Ever since Erdogan unveiled the project ahead of the 2011 general elections, it has been under fire over concerns of massive environmental damage.

According to the plan, Canal Istanbul would run on Istanbul’s European side, starting at Durusu on the Black Sea coast, then arch slightly southeast before connecting to the Sea of Marmara at Kucukcekmece. It would be 43 kilometers (26.7 miles) long, 100 meters (328 feet) wide and 25 meters (82 feet) deep.

Those opposed to the project argue the canal would seriously damage the ecosystems of not only the Black and Marmara seas but also the northern Aegean, salinize Istanbul’s water resources and trigger a major environmental disaster, the ramifications of which would affect 310 million people in Turkey and its environs.

In an Aug. 18 speech, Erdogan said, “With Canal Istanbul, we will deliver a big message to the world. We will definitely realize this strategic project, which will be Turkey’s biggest ever investment.” In the ensuing days, however, the outlook for an economic crisis sharpened, prompting talk that the project would be postponed as part of belt-tightening measures in the public sector.

In the more than two months since then, Erdogan has not mentioned Canal Istanbul again. Nevertheless, his Environment and Urban Affairs Minister Murat Kurum said Sept. 15 that the $10 billion project was “going on.” Given that Erdogan frequently contradicts his ministers, Kurum’s statement should not be considered binding for Erdogan.

Five days later, Treasury and Finance Minister Berat Albayrak, who is also Erdogan’s son-in-law, unveiled a “New Economic Program” for 2019-2021 that evoked the possibility of Canal Istanbul being shelved despite Kurum’s assurances. The program stated that “projects that have not yet been tendered or have been tendered but not started yet will be suspended,” while “mega-infrastructure projects will be carried out through foreign direct investments and with international financing.”

The description led to confusion with regard to Canal Istanbul. The project still lacks a feasibility report, let alone tendering. But at the same time, it is a true “mega-infrastructure project” that stands no chance of being realized except “through foreign direct investments and with international financing.” So in which category does the project fall? Will it be shelved because it has not been tendered yet or will it go ahead with international financing?

Yaman Toruner, a former Central Bank governor and now a columnist for Milliyet, which is close to the government, wrote Sept. 24 that Canal Istanbul had been shelved for three years, and neither government officials nor the pro-government media have disputed the claim.

According to Esen Caglar, an economist and managing partner at Policy Analytics Lab, an Ankara-based consultancy and think thank, “The slump in realty prices in the current crisis environment” is the factor forcing the suspension. Speaking to Al-Monitor, he said, “This project is not about a waterway, but about land development. This had become clear ahead of the 2011 elections. The year 2011 was a time when interest rates were the lowest globally and Turkey laid the foundations of economic policies based on real estate. The global crisis was abating and liquidity was abundant.”

Because real estate promised bigger profits in a shorter time than industrial investment but land development in Istanbul was exhausted, Ankara “thought that something like this would spawn great [construction] projects in its environs,” Caglar said.

Recalling that the project popped up amid a construction frenzy, he continued, “In the budding years of real estate bubbles, such projects appear logical. But now — how bad will the fall from the zenith be? [The sector] could plunge faster than the economy. In the July-September period, real estate prices in Istanbul dropped 28% in dollar terms. Judging by the average prices in projects such as Canal Istanbul, foreign investors will not see the prices increase as fast as before. Housing prices may continue to go down for a while. With interest rates very high and housing prices falling, there is the risk of not making profit. It doesn’t square with economic rationale.”

And what about the chances of international creditors financing the project? Al-Monitor put the question to two analysts, one foreign and one local.

Wolfango Piccoli, the London-based Co-President of Teneo Intelligence, said, “Despite possible loan guarantees from the Turkish treasury, it will be a real struggle for Turkey to find international lenders willing to put up money on new megaprojects in the country. It was already difficult before — no foreign lender is involved in the financing of Istanbul’s new airport — and it is virtually impossible now, given the worsening external backdrop for emerging markets and the growing challenges that the Turkish economy is facing. This will be especially true for projects like Canal Istanbul, which are controversial on environmental grounds and have no clear economic rationale.”

Refet Gurkaynak, economics professor at Ankara’s Bilkent University, stressed that foreign lenders have come to see Turkey as an unreliable borrower, though its public debt-to-GDP ratio is not especially high. “We see this in the fact that Turkey was able to borrow foreign [currency] at a 5% interest rate in January, while today it can borrow only at 7.5%. The market is unwilling to lend it at lower rates,” he said.

Gurkaynak argued that Ankara’s infrastructure projects often lack feasibility, which sooner or later would make them a burden on public finances. He continued, “If you can’t finance a project by yourself, you turn to an investor and say, ‘You borrow the money and do the job and I give you revenue guarantees.’ The creditors of investors are the same creditors lending to the Turkish state. When you give revenue guarantees, you have to pay them. Your payment pledge has to be credible so that the investor can trust it and finance the project. The increasing interest rates indicate that confidence in Turkey’s ability to pay is decreasing. Turkey is seen as a risky borrower. So apart from whether such projects are desirable in terms of the environment, resources or other reasons, the ability to finance them is highly questionable.”

Despite deepening economic woes, Ankara is not expected to seek a bailout deal with the International Monetary Fund, especially ahead of local elections in March. Still, some speculate it could make the move after the elections. And what if it goes to the IMF with Canal Istanbul still in the works?

“You cannot go to the IMF with such a project. This stuff has no economic feasibility,” Gurkaynak said. “The first thing the IMF would tell you is to be economically rational or not come at all, not with such stuff.”

Cem Akyurek, chief economist at a US-based investment firm who closely follows Turkey and the IMF, said, “If Turkey is forced to go to the IMF, the budget-tightening policies the IMF demands will have to factor in the additional burdens stemming from the crisis and the public-private partnership projects. When the IMF decides to lend, it starts with calculating the debt burden that such projects could place on the treasury. Should they go ahead with Canal Istanbul, this would put an additional burden on low-income groups, as the IMF would press for tighter austerity measures.”

Thus, insisting on Canal Istanbul raises the specter of political costs along with economic.

For Erdogan, Canal Istanbul is highly important in terms of his own prestige. Although the project is practically shelved, this is unlikely to be acknowledged until the local elections in March because that would mean an admission of the economic crisis as well.

In theory, Erdogan can still realize Canal Istanbul but with one prerequisite: finding a banker crazy enough to finance his “crazy project.”