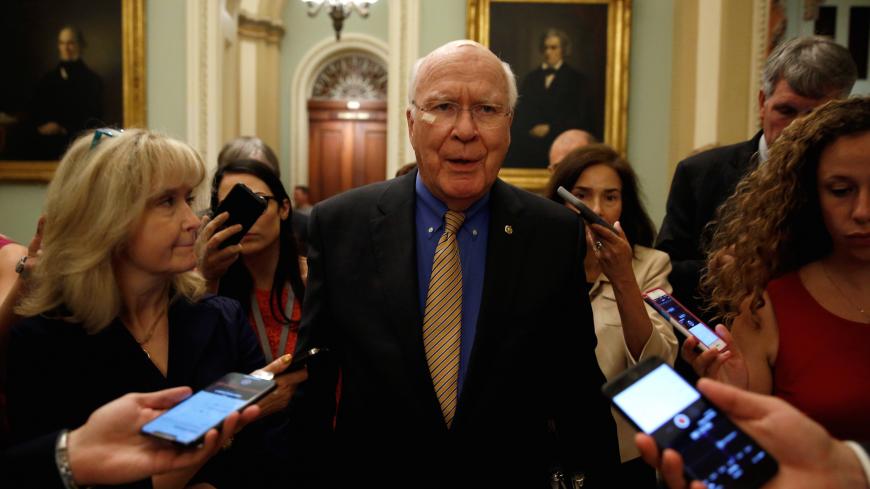 The top Democrat on the Senate’s spending panel will continue to hold up $105 million in US military aid to Egypt until Cairo shows progress toward releasing an Egyptian-American detained during a military crackdown five years ago.

Vermont Sen. Patrick Leahy, the top Democrat on the Appropriations Committee, wants the State Department to get an update from Egypt on 53-year-old Moustafa Kassem before the assistance is released. Kassem, a former New York cab driver, was swept up in mass arrests as President Abdel Fattah al-Sisi took power in 2013.

Egyptian authorities sentenced Kassem to 15 years in prison in September for allegedly attempting to overthrow Sisi’s government in a mass trial that included 700 defendants. Kassem, who suffers from diabetes, recently began a hunger strike.

"The senator will decide about releasing his hold on the funds depending on the response of the Egyptians,” a Leahy aide told Al-Monitor. “Based on the information we have received, his case should be considered in connection with any decision.”

Leahy’s office previously told Al-Monitor that the senator was withholding Egypt aid until Cairo fulfills a variety of human rights conditions. These include paying for medical treatment for an American citizen wounded in an Egyptian military attack, giving prisoners fair trial rights and overturning the 2013 convictions of NGO workers. Kassem’s case is now part of that hold. The aid is part of an annual $1.3 billion military aid package.

Leahy’s office has requested to visit Kassem in Cairo and discuss his situation with Egyptian officials, as Madhiraju said Egyptian authorities have recently denied family visits. ABC News reported last month that Kassem was forced to dictate letters to President Donald Trump and Vice President Mike Pence last month because he was too ill to write them himself.

Another American arrested in the 2013 protests, 27-year-old Ahmed Etiwy, was released in May.

Even though Pence pressed Sisi on the case during a visit to Cairo in January, Madhiraju said he was only able to make contact with the vice president’s office after Kassem’s sentencing last month. He’s hoping the precedent of evangelical pastor Andrew Brunson’s release from a Turkish prison this month after Trump and Pence became personally involved could be replicated.

“If you look at the Andrew Brunson case, that was an all-hands-on-deck case. I don’t know why Moustafa’s case should be any different.”

“For many, many months, this was soft-pedaled in various arms of the US government,” said Madhiraju, who runs the Washington-based nonprofit Pretrial Rights. “If you look at the Andrew Brunson case, that was an all-hands-on-deck case. I don’t know why Moustafa’s case should be any different.”

Trump has sought to carve out a track record in the White House of negotiating the release of Americans imprisoned abroad. But his focus has been selective.

The Treasury Department, for example, only listed Brunson’s case in its announcement of sanctions on two Turkish Cabinet members this summer. Sen. Roger Wicker, R-Miss., who chairs the Helsinki Commission, an independent US agency run by Congress, has called for the extension of US sanctions until Serkan Golge, a NASA scientist, and three US consular employees detained last year return home.

The US sanctions remain in place, even as Pompeo announced today that they were under review following Brunson’s release. The secretary of state, however, said the United States continues to press for the release of Turkish employees of the US Consulate in Istanbul as well as Golge. Pompeo visited the families of the detained consular staff in Ankara on Wednesday.

“We hope that the administration will keep up the pressure on, and not pretend that things are hunky dory,” the staffer added. “It seems like the same determination should apply to Serkan Golge and the consulate staff.”

But experts aren’t convinced Brunson’s return will lead to a renewed push to free others, including those in Turkey.

“Brunson’s release could have been an opportunity to discuss the cases of other US citizens, permanent residents and State Department employees,” said Aykan Erdemir, a senior fellow at the Foundation for Defense of Democracies and a former member of the Turkish parliament. “We don’t see much debate on other hostages.”