The king’s decision not to renew the leases of Jordanian lands to Israel under the 1994 peace treaty was seen as a bold move that might divert attention from the difficult economic decisions that the government and parliament must make by the end of the year, according to analysts. 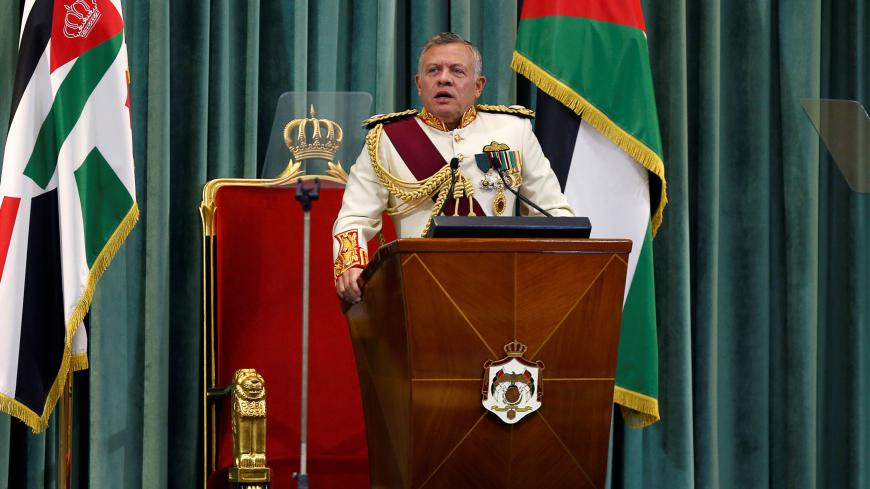 Jordan's King Abdullah speaks during the opening of the third ordinary session of the 18th Parliament in Amman, Jordan, Oct. 14, 2018. - REUTERS/Muhammad Hamed

Jordan’s King Abdullah ended weeks of speculation when he announced Oct. 21 that the kingdom is terminating two annexes in its 1994 peace treaty with Israel regarding the special use of Jordanian territories. The 25-year “special regime” allowing Israelis to use Baqoura and Ghumar lands in northern and southern Jordan ends in November 2019, but notice of termination must be given by either party one year before.

Pressure by political parties, lawmakers and the public has been building for some time on the Jordanian government to clarify its position regarding the fate of Baqoura and Ghumar. For the majority of Jordanians, the “leasing” of Jordanian lands to Israel under the peace treaty was seen as a national disgrace. It is no wonder that Jordanians from all walks of life warmly welcomed the king’s announcement, first made through his official Twitter account.

The king tweeted that “Baqoura and Ghumar have always been at the top of our priorities,” adding, “Our decision is to terminate the Baqoura and Ghumar annexes from the [1994 Jordan-Israel] peace treaty out of our keenness to take all decisions that would serve Jordan and Jordanians.”

Baqoura, a strip of agricultural land at the confluence of the Jordan and Yarmouk rivers in northern Jordan, was occupied by Israel in 1950, while Ghumar in southern Jordan was captured by Israel between 1968 and 1970. Both lands were returned to Jordanian sovereignty under the peace treaty, but Israel was allowed to use them for a period of 25 years.

The decision was seen as a royal jab at Israeli Prime Minister Benjamin Netanyahu, whose relations with King Abdullah were never easy. Jordanians have been exasperated by the killing of two Jordanian nationals in July 2017 at the Israeli Embassy compound in Amman by an Israeli security guard. Netanyahu has snubbed Jordan’s demand to put the culprit on trial, and he offered what was seen as an informal apology to the kingdom.

King Abdullah has expressed his frustration with repeated provocations by Israeli religious extremists at Al-Aqsa Mosque in East Jerusalem despite promises by Netanyahu to honor Jordan’s special custodianship under the peace treaty of Muslim holy places in the city. Jordan had slammed Israel’s decision in July 2017 to install metal detectors at the entrances to Al-Aqsa Mosque compound, and the king’s efforts were instrumental in reversing the Israeli move.

The king has been a vociferous critic of Israel’s far-right government actions to dismantle the two-state solution, denying Palestinians the right to have their own state in the West Bank and Gaza Strip with East Jerusalem as its capital. Jordan had rejected President Donald Trump’s decision last year to recognize Jerusalem as Israel’s capital and relocate the US Embassy there, and to end financial backing of the UN agency responsible for Palestinian refugees, the United Nations Relief and Works Agency.

It was always believed that a decision on the fate of Baqoura and Ghumar would be made by the king himself and not the government. It is clear that the decision, which was described by local pundits as bold and brave, was taken after careful consideration and for domestic as well as regional reasons.

The government — which was appointed in June after popular protests against its predecessor’s economic policies — is under domestic pressure as it prepares to pass a controversial income tax law. The king’s move is a much-needed shot in the arm for the government. The current euphoria will boost national unity and divert attention for some time from the difficult economic decisions that the government and parliament must make by the end of the year.

The termination of the annexes will satisfy political parties and activists who are critical of any form of cooperation with Israel, especially an agreement by the former government to buy liquid gas from Israel. But while the decision has stunned Israel, it is not expected to affect the peace treaty or security ties between the two countries.

Reacting to the Jordanian decision, Netanyahu was quoted Oct. 21 as saying that Israel plans to negotiate with Amman to ensure that the entire deal remains intact. “There is no doubt that the entire agreement is important and dear to both our countries,” he said, adding that they will “negotiate with Jordan for its extension.”

The annexes allow for bilateral discussions, and Israel will attempt to politicize the issue despite the fact that Jordan is within its right to terminate the agreement. While Jordanian sovereignty over Baqoura is not in question, the fact that most of the land there is privately owned by Israelis will be the main stumbling block. The Jordanian government can buy the land back; if that fails, then the Israeli owners will be treated under Jordanian laws that cover foreign land ownership in the kingdom.

Israel was quick to deny reports that Israeli Agriculture Minister Uri Ariel had threatened Oct. 22 to cut off water to Jordan in response to King Abdullah’s decision to cancel annexes in the peace treaty.

But Jordan may come under pressure from the United States to reconsider its decision — a possibility that the king appears ready to deal with. Meanwhile, Israel will hope to engage the kingdom in protracted negotiations in an attempt to extract possible concessions.