The bewildering lone wolf attack at the West Bank Barkan Industrial Zone defied the pattern of terrorist behavior that Israel’s security forces have come to expect. 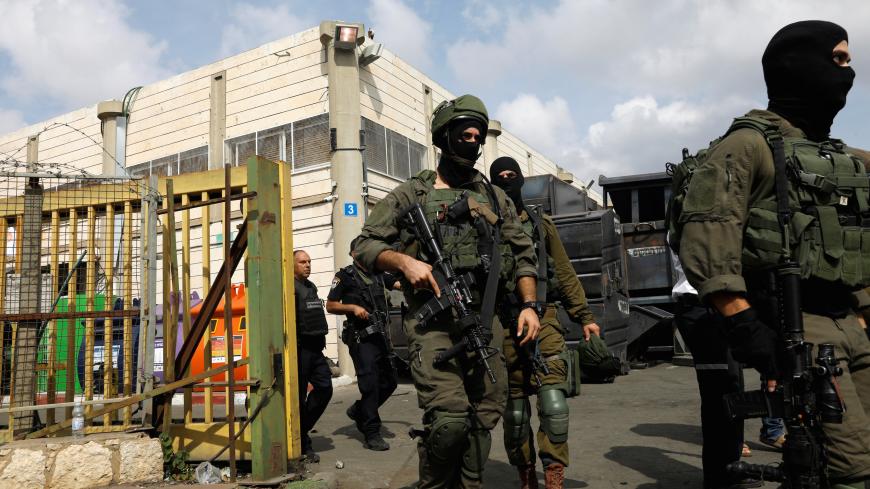 Israeli soldiers patrol near the scene where a Palestinian shot and wounded three Israelis, at an industrial park adjacent to a Jewish settlement in the occupied West Bank Oct. 7, 2018. - REUTERS/Ronen Zvulun

The Israel Defense Forces and Shin Bet have spent the last four days in a giant manhunt for Ashraf Na'alowa, the Palestinian assailant behind one of the harshest terror attacks Israel has seen in recent months. The IDF co-opted two infantry units for the manhunt in addition to existing forces in the area and the brigade stationed in the region. IDF intelligence has also been working overtime, employing drones, collection units, the army’s canine unit and other special units. The Shin Bet, which is supposed to know if a stone is moved from one place to another in the West Bank, is pushing its agents hard and using every means at its disposal to track Na'alowa. Even the Palestinian Authority security apparatus has joined the efforts as, according to a high-placed Israeli military source who spoke to Al-Monitor, the Palestinians also want him to be caught promptly before he carries out another attack.

Yet despite all the effort, the man has vanished. Na'alowa, a resident of Shuweika near Tulkarem, apparently does not belong to any terror organization, is not connected to any military infrastructure and has no network of collaborators or hiding places set up in advance. Still, he has so far managed to elude his pursuers, who are still trying to understand what impelled him to carry out the Oct. 7 attack, one of the most unusual that Israel has seen.

The attack casts a dark shadow on Israel’s security policy in the West Bank over recent years. This policy was dictated by Chief of Staff Gadi Eizenkot, previous Coordinator of Government Activities in the Territories Gen. Yoav Mordechai and the Shin Bet. It was based on one factual premise: that almost no Palestinian with an Israeli work permit has ever carried out a terror attack. It allowed the security system to convince the political echelons (importantly the ultra-right-wing cabinet) to maintain the texture of daily Palestinian life, their freedom of movement and the issuing of work permits to tens of thousands of them who leave home every morning to work in Israel or the settlements.

This premise helped the IDF to curb the wave of individual attacks that erupted in October 2015 and prevent it from igniting into a true intifada. The IDF and the Shin Bet were careful to differentiate between isolated terrorists and the general Palestinian population that was not involved in these attacks and avoided inflicting harm on those who were not directly connected to the violence. This policy served to calm the territory and prevent the violence from spreading, as its authors had hoped it would. Then Na'alowa showed up one fine Sunday morning at 7:30 to the Alon waste recycling plant in the Barkan Industrial Park, ready for his shift in a factory where he had worked for many long months. Why would anyone suspect that an improvised Carl Gustav submachine gun was hidden in the large backpack he carried?

Na'alowa began his workday as usual. He asked the clerk for a pair of cable ties, an item he used frequently in his work as an electrician, then went up the steps to the floor of the managers. There he pulled out his weapon and forced one of his Palestinian coworkers to tie up Kim Levengrond Yehezkel. Na'alowa murdered Kim, a young mother of a toddler, as well as Ziv Hajbi. He injured another woman and escaped. He did not shout “Allahu Akbar,” did not post a suicide message on Facebook. A close look at the social networks show that he is not a radical Islamic activist and had not sworn to take revenge for someone. His actions are still a mystery, but worst of all, he has disappeared into thin air.

The terror attack was directed at Israel’s soft underbelly: The Alon factory is a symbol of Israeli-Palestinian coexistence. Hundreds of Palestinians work there, as do hundreds of Jews, shoulder to shoulder, in full harmony and cooperation. There had never been any kind of violence on the site. The fact that it was one of the workers who betrayed his friends and went on a killing spree inside the factory shocked many people, especially supporters of coexistence efforts on both sides.

The murders are a dilemma for Israel on the strategic-operational level as well. At this stage, Eizenkot and Shin Bet head Nadav Argaman continue to strongly support the existing policy. A single attack is not supposed to cause dramatic policy changes or system failures. However, if Na'alowa's attack is followed by copycats — which happens occasionally in the Israeli-Palestinian conflict — things might change. The Israeli cabinet might give up and instruct the IDF to return to the policy followed in past intifadas: invalidating work permits, imposing closures and blockades on problematic villages, collective punishment, dramatic increases in traffic barriers and significant narrowing of what freedom of movement the Palestinians enjoy now in the West Bank. We’re not there yet, thankfully, but it is possible that at this rate, we’ll soon find ourselves headed in that direction.

To decide how to respond, Israel must first locate and detain the assailant. Among the public, especially on the right, voices are calling on the IDF not to capture him alive. He deserves to die, say family members of the people who were killed, and many Israelis share their opinion. There has also been much public criticism over the allegedly improved living conditions of Palestinian prisoners in Israeli jails. Many Israelis complain about the benefits they receive in jail and that there are always some prisoners released prematurely as part of prisoner-exchange deals with Hamas.

The IDF and the Shin Bet know that it is important to arrest Na'alowa alive for the chance to decipher what motivated his attack, how he planned it and how he made the decision to carry it out. Information of this type is very valuable now, when the security system has to deal more with furious outbursts by disconnected individuals than with organized terror groups.

This lack of affiliation has apparently helped Na'alowa disappear. Since he is not connected to any group, Israel’s intelligence superiority becomes irrelevant. An individual like Na'alowa can simply take refuge in a nearby cave and vanish, while relying on local people for necessities. In such a case, we can anticipate a long, tiring manhunt.

Statistics show that Israel always captures perpetrators — eventually. This case will be no different. Only then will we know if the attack in the industrial park is of the kind that will bring a turning point in Israeli strategy, or was just an uncharacteristic operational mishap in the security system. The truth is that prior to the attack, potential warning signs were missed, and the system did not react: The assailant missed work for two weeks. He left a suicide letter with a friend and managed to smuggle a submachine gun into the plant. Hundreds of assaults like this are thwarted every year by the IDF and the Shin Bet. Those that are not threaten to turn the tables on everyone.