More than 100 cinema halls across Iran, which belong to hard-line Hozeh Honari, have boycotted "Cold Sweat,” an award-winning film that tells the story of an Iranian futsal player who is banned from taking part in an international competition by her husband. 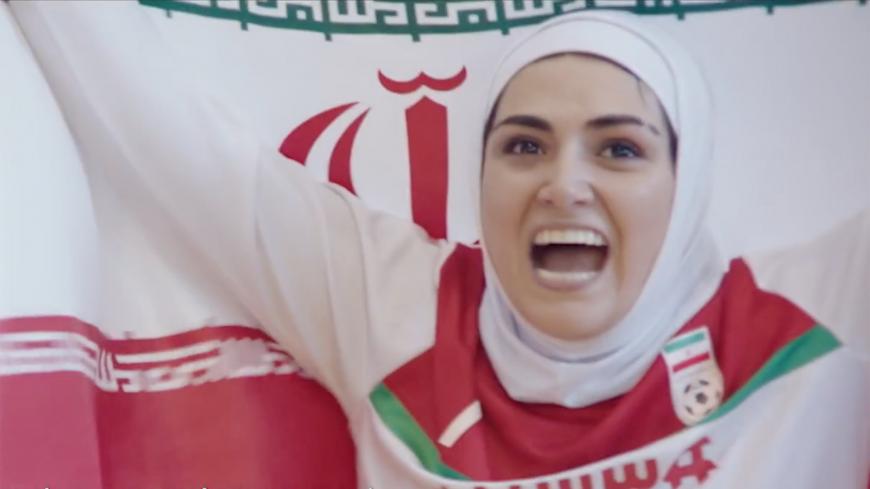 A still from the trailer for the movie "Cold Sweat," uploaded Oct. 12, 2018. - YouTube/Tokyo International Film Festival

Soheil Beiraghi’s "Cold Sweat,” an award-winning film based on a real story of a woman’s struggle to play futsal (indoor soccer), has raised the ire of the Iranian hard-liners who accuse the film of being unsuitable for families and undermining family values.

"Cold Sweat" narrates the story of Afrooz, the captain of the women's national futsal team, who scores a goal in a key match, leading her team to the finals in the Asian Cup in Malaysia. When she and the other players arrive at the airport, it turns out that the captain has been barred by her husband from leaving Iran.

Under Iranian law, a husband can stop his wife from traveling abroad.

The film appears to tell the story of Niloufar Ardalan, the captain and left midfielder of the Iranian women's national futsal team, who wasn’t allowed to attend the Asian Cup in 2015 when her husband forbid her from accompanying her team.

Despite the similarities, Ardalan and Baran Kosari, who plays the leading role in “Cold Sweat,” have both denied that it is the same story. When the film was first screened — and won two awards — at the Fajr International Film Festival in February, reports emerged in the local media that Ardalan’s husband, Mehdi Toutounchi, a well-known sports journalist, filed a lawsuit against the film, but he refuted the claims later.

More gravely, in early September, when the film opened in cinemas across Iran, Hozeh Honari, one of the country’s largest cultural institution, boycotted the film. Hozeh Honari is affiliated with the Islamic Propaganda Organization, a Tehran-based body whose budget is funded by the Iranian state. Hozeh Honari owns more than 100 cinema halls across Iran, whose boycott would have severe consequences on any film's box office earnings.

Following the boycott, the Association of Iranian Film Directors issued a statement Oct. 16, criticizing Hozeh Honari for its illegal boycott of "Cold Sweat."

"The illegal and baseless prohibition of screening … is a violation of the rights of filmmakers and … cinema viewers," the local press quoted the statement as saying. The statement also claimed that Hozeh Honari had recently formed a group to censor films before screening them in its cinema halls.

In response, Hozeh Honari explained that "Cold Sweat" was not suitable for families. Yazdan Ashiri, its public relations director, told the local YJC news agency Oct. 17 that the body did not consider the film to be in line with the family values they uphold. “We have the right to choose which films to show in our cinemas,” he said. "Every institution and organization has its own policies. We reached the conclusion that given the issues brought up in 'Cold Sweat' and its content, we cannot put [this film] on our priority [list] for screening. That’s why this film was not screened in any of our cinema halls.”

Kosari, who lost 20 kilos (44 pounds) to play the role of the captain of the women's futsal team, believes the film's revenue will decrease due to losing the opportunity of being screened in more than 100 cinema halls.

"The boycott by Hozeh Honari has turned into an effective advertisement. It attracts more people to watch the banned film. However, the fact that it cannot be screened in certain cinemas will have an irrepairable negative impact on its box office revenue. Directors, producers and actors have issued statements asking Hozeh Honari to stop flexing its muscles," wrote Kosari on her Instagram page Oct. 5, adding that she was “disappointed and angry" with the decision.

Several other cinemas expressing solidarity announced that "Cold Sweat" would be screened for a longer period, so it can maximize its profits.

Meanwhile, Iran's state TV, which is also controlled by the hard-liners, is not broadcasting the trailer of "Cold Sweat.” Explaining the reason behind the TV channel's opposition, the film's director, Soheil Beiraghi, told Reformist ILNA news agency Oct. 6, "IRIB [national TV organization that holds the monopoly of domestic radio and TV services in Iran] told us that we should give them a trailer with no scene showing Baran Kosari, but given the structure of the film it wasn’t possible for us to create such a trailer. We were [then] deprived of the TV channel broadcasting our [trailer]."

In an interview with Reformist Etemaad daily Oct. 22, Kosari said that she has been on the blacklist of state TV for a long time. "Due to my position in 2009 [Kosari supported Reformist candidate Mir Hossein Mousavi in the presidential elections], state TV placed a ban on me. Although this is not important to me, when it comes to advertising it is different, [because] state TV is violating the rights of producers," Kosari noted.