Egypt and Russia's recently signed cooperation agreement is expected to restore political and economic relations between the two countries and build on longstanding ties. 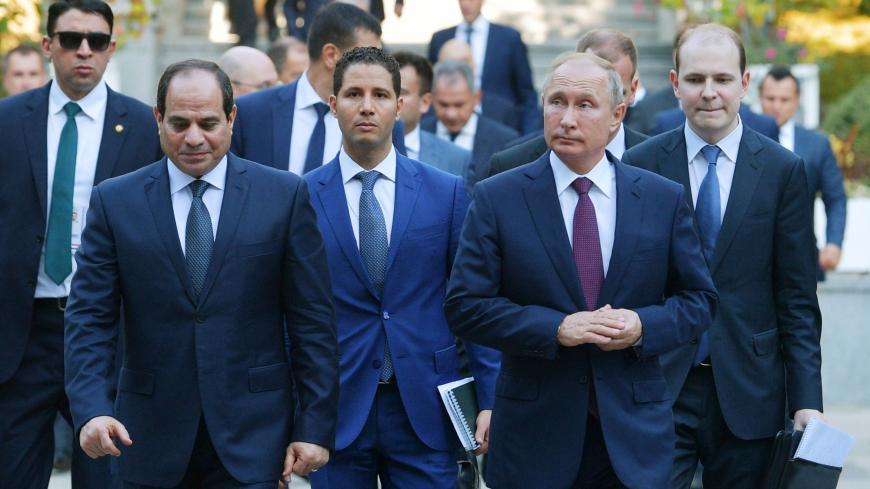 An agreement on comprehensive partnership and strategic cooperation signed between Egypt and Russia on Oct. 17 is expected to upgrade Egypt’s political and economic relations to an unprecedented level, political analysts and economists said this week.

The partnership deal was signed by Egyptian President Abdel Fattah al-Sisi and Russian President Vladimir Putin during the former’s visit to Russia. At a joint press conference with the Russian leader, Sisi said that the strategic partnership agreement “ushers long-standing relations into a new chapter.” Putin said that the deal sets goals that will “deepen Russian-Egyptian ties in different areas.”

Political analysts and economists in Egypt said that the agreement would not only ease trade exchanges and economic relations between the two countries, but will also include high-level cooperation on issues related to counter-terrorism efforts, military deals, illegal migration and nuclear projects.

Ahmed el-Shami, an economist and a professor of feasibility studies at Ain Shams University, said that Russia mainly signs such partnership agreements with Asian countries and not with Arab states, adding that inking such a deal with Egypt signals that Russia is willing to upgrade bilateral ties to a whole new level.

“This agreement is a new stage in developing relations and it comes to benefit [Egypt's] peaceful nuclear program, represented in al-Dabaa project, as well as the coming arms deals,” Shami told Al-Monitor. He expects that the two countries will establish strategic partnership institutions and bodies that will ensure progress in relations.

Egypt and Russia are also cooperating to build a nuclear power plant in the area of al-Dabaa on the Mediterranean Sea. The project is expected to take seven years and cost $29 billion. Russia will pay $25 billion and Egypt will fund the remaining amount.

Shami added that the strategic partnership agreement aims to revive the era of the 1960s, when relations between the two countries were at their peak. “In 1955, Egypt and the Soviet Union, Russia now, signed a partnership agreement that included arms deals and a Russian contribution to the establishment of the High Dam,” he said.

That agreement supplied Egypt with modern Soviet arms worth over $250 million, marking a turning point in the Cold War and greatly affecting the Arab-Israeli conflict.

"This month's signing of the partnership agreement marks a turnaround in relations that has never been seen since the reign of late president Gamal Abdel Nasser,” said political analyst Ammar Ali Hassan.

After Egypt won the war in 1973, late President Anwar al-Sadat sought to balance Egypt's foreign relations by boosting the country's ties with the United States, weakening relations with the Soviets.

Hassan also said that the agreement will further Egyptian-Russian 2+2 talks, summits between the countries' ministers of defense and foreign affairs. Egypt and Russia initiated the high-level talks in 2013. “It is a new level of cooperation in all aspects and will see the launch of joint institutions that will ensure the unprecedented development of bilateral ties,” he told Al-Monitor.

On the economic level, Farag Abdel Fattah, a professor of economics at Cairo University, said that the agreement will be highly beneficial to the Egyptian economy, making the flow of imports and exports between Egypt and Russia much easier. “The deal will also help in the establishment of high-level economic and investment entities in the coming period that serve the economies of both countries,” he told Al-Monitor.

According to the State Information Service, trade between Egypt and Russia stood at $4.6 billion during the period from January to October 2017, up by 59% compared to the same period a year earlier.

Russia is also carrying out several economic projects in Egypt, including the building of an industrial zone in East Port Said with investments worth $7 billion. The zone, which is part of the Suez Canal Economic Zone, is expected to create job opportunities for more than 35,000 people.

Relations between Egypt and Russia have been developing since Sisi took office in 2014. The Egyptian and Russian leaders have met for nine times since 2014, including mutual visits to Cairo and Moscow.

“Relations between Egypt and Russia are historical and deeply rooted and the leaders of both countries have been keen to boost them. Now they want to take this cooperation even further,” economist Abdel Fattah said.