As Turkey waits to see which Iraqi political coalition comes up with the parliamentary majority necessary to install a new government, Ankara is rooting for the bloc of cleric Muqtada al-Sadr, which it sees as most likely to minimize US and Iranian influence in the country. 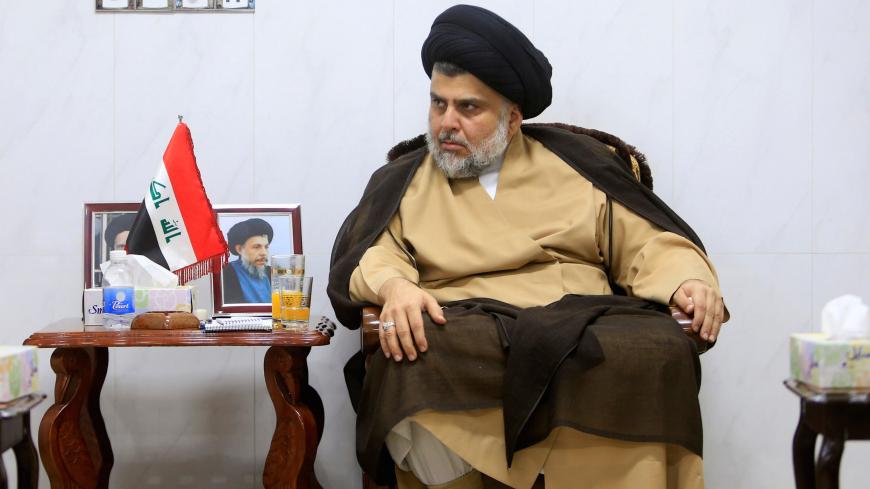 As a variety of serious issues between Baghdad and Ankara are put on hold as Iraq forms a new government, Turkey is keeping a close watch. Having learned from its backfired intervention in 2010, Ankara is being more prudent this time around. Although Turkey likes to give the impression that it's neutral in Iraq, its heart is with the Sairoon political bloc headed by Islamist cleric Muqtada al-Sadr. But that doesn’t mean the Sadr bloc is offering Turkey free rein in critical issues awaiting solutions.

Two coalitions are competing to set up the new government in Baghdad; both are led by Shiite blocs. Sadr's Sairoon says it's ready to form the government, claiming more than 180 members, including the Nasr bloc of Prime Minister Haider al-Abadi, the National Wisdom Movement of Ammar al-Hakim, and a sprinkling of Sunni, Turkmen and Christian groups.

However, the rival Fatah Alliance claims that many Sairoon members have defected to Fatah, making it the top bloc with 145 votes. The Fatah Alliance is jointly led by Hadi al-Amiri, a commander of the Popular Mobilization Units (PMU), and by former Prime Minister Nouri al-Maliki’s pro-Iran State of Law Coalition. But one shouldn't rely on these numbers, as nobody really knows who stands where. For example, the Nasr bloc has already divided into three factions. There could be further shifts between blocs. The Sadr-Abadi-Hakim bloc could even incorporate the Fatah Alliance.

The Kurds are the ones to watch. They have 60 deputies in seven parties and are the key to a new government. Kurds were bitterly disappointed by Iran and Turkey’s rejection of the Kurdish independence referendum in September 2017. After the Iraqi government took back control of Kirkuk in October 2017, Iran was flexible and maintained its dialogue with the Kurds, while Turkey remained in the angry neighbor mode. The common claim that Turkey is the determinant power in Iraq has withered. Ankara's influence collapsed because of several actions: its attempt in 2010 to install a Sunni bloc to run the government against Maliki; offering protection to Sunni leaders like Tariq al-Hashemi; agreeing to a unilateral, 50-year oil deal with the Kurdish government; tolerating the Islamic State as a Sunni movement after Mosul was captured; labeling the PMU a terror movement; and reinforcing the Turkish presence at Bashiqa base.

Neither of the rival blocs offer Turkey guarantees of a partnership and there are continuing issues such as the future of Kirkuk and the water crisis. Turkey's plan to open a new crossing at Ovakoy to bypass the current Kurdish-operated crossing at Iraq's Fish Khabur are up in the air, as are plans to construct a new pipeline to carry Iraqi oil directly to Turkey, and military operations against Kurdish militants at Qandil and Sinjar. Sources speaking to Al-Monitor on condition of anonymity noted that regardless of who sets up the new government, Turkey shouldn't have high expectations.

The Bashiqa base will continue to be a major headache after the new government forms. Kirkuk's future, the oil pipeline and the proposed border crossing all depend on whether Baghdad and the Kurds can reconcile. A major portion of the road from the Ovakoy crossing in Turkey to Tal Afar in Iraq is under Kurdish militia control, and that hardly assures security.

How will the Kurds be persuaded to accept a new project that will reduce their revenues from the Habur crossing by half and make a serious dent in the Kurdistan budget? During his Aug. 14 visit to Ankara, Abadi declared that work is ongoing to open a second crossing at Fish Khabur, but uncertainty prevails. Baghdad — aware that it can't build a new road and a pipeline in a region it can’t control — is stalling, but won’t admit the projects might not be possible. As the central government in Baghdad has been unable to impose its rule over this region since 1991, it's up to Kurds to unblock the impasse. A tender was issued for the pipeline contract seven months ago but fell through. Meanwhile, a bypass line that carries Kurdish oil from Kirkuk to Ceyhan, Turkey, continues to operate: Turkey’s anger over the independence referendum didn't spoil the oil trade.

Nowadays in Kirkuk, Iran seems to have the most influence. When Turkey’s ambassador to Baghdad, Fatih Yildiz, was finally allowed to visit Kirkuk after four futile attempts, it created excitement in Turkey — but not in Kirkuk.

Although Iran is actually the driving force that pushed the Kurdish peshmerga out of Kirkuk, Tehran still maintains a dialogue with the Kurds. Hajj Ihsan, deputy of Iranian Quds Force commander Qasem Soleimani, acts like a consul general — so a single low-profile meeting by a Turkish envoy isn't enough to strengthen Ankara's ties with Kurdish officials or overcome Iran's influence. Ankara would need to establish high-level contacts in Erbil and the city of Sulaimaniyah to expand its clout. Erbil is under the influence of the Kurdistan Democratic Party, while Sulaimaniyah​ is under the influence of the Patriotic Union of Kurdistan. Both parties are important to Turkey to strengthen its ties in the region.

Organizing PMU among the Kurds is an important step by Iran. In addition to angry and disgruntled Kurds, Turkmens also are increasingly falling under Iranian influence.

To win over the Kurds, the Iraqi coalitions must contend with several Kurdish conditions. They are demanding that the peshmerga be allowed to return to Kirkuk, and that they get a share of the oil and collect 17% of the national budget that was agreed on years ago. No doubt the Ovakoy crossing and the new pipeline will constitute major elements of new negotiations. That's why Ankara is so focused on Sadr and his Sairoon bloc. Sources told Al-Monitor that Sairoon isn't under the influence of Iran or the United States, so it can adopt a more balanced position toward Turkey and its requests. Another factor in Turkey's focus on Sairoon is Maliki's discord with Ankara.

But Sadr’s negative attitude toward foreign interventions also applies to Turkey, which still maintains troops at Bashiqa, keeps building up bases in Iraqi Kurdistan and retains ties to Turkmens in Kirkuk.

Ankara harbors hope that Sadr will stand with Turkey against the Kurdistan Workers Party (PKK), which is considered a terrorist group. But Sadr has always preferred a path toward reconciling with the Kurds rather than punishing them, and is highly unlikely to change now.