With bipartisan opposition to the Yemen war steadily growing, a Democratic wave in November could force the Donald Trump administration to end support for the Saudi coalition. 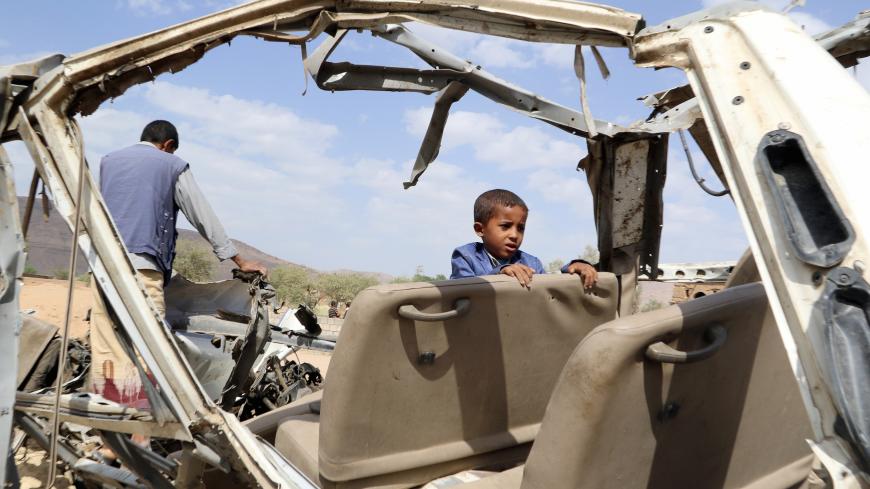 Hafidh Abdullah al-Khawlani, who survived a Saudi-led airstrike, stands with his father on the wreckage of a bus destroyed by the strike in Saada province, Yemen, Sept. 4, 2018. His brother was killed by the airstrike. - REUTERS/Naif Rahma

Secretary of State Mike Pompeo issued a certification to Congress on Tuesday that allows the United States to continue supporting the Saudi-led coalition in Yemen against the Iran-backed Houthis.

A copy of Pompeo’s justification, obtained by Al-Monitor, characterizes the US role in the war as “limited defensive support” for its Gulf allies.

“Our support to the Saudi-led coalition promotes US national security priorities, including on counterterrorism and countering Iran’s destabilizing behavior,” Pompeo argued in the justification.

But as Democrats threaten to retake the House and possibly even the Senate in November, that support looks increasingly imperiled.

Rep. Adam Smith, D-Wash., the top Democrat on the House Armed Services Committee, vowed at a Defense News conference last week to increase oversight of US military intervention abroad, including Yemen, referring to it as a “major problem.”

“I don’t think we’re pursuing the right policy there in the way that we are backing Saudi Arabia and the [United Arab Emirates] in a civil war that is leading to the largest humanitarian crisis on the planet,” said Smith.

The next day Smith signed on to legislation that would outright force the Donald Trump administration to end midair refueling support for the Saudi-led coalition, which is essential for Riyadh to continue its sustained aerial assault against the Houthi rebels.

The resolution is a repeat of last year’s attempt by Reps. Ro Khanna, D-Calif., and Mark Pocan, D-Wis., to force a floor vote under the War Powers Act, which provides for expedited procedures to remove the United States from military engagements abroad.

And while Republican leadership threatened to avert a floor vote by stripping last year’s bill of its privileged status, resulting in a nonbinding compromise resolution, Riyadh and Abu Dhabi may face another embarrassing floor vote if Democrats retake the House in November.

“Adam Smith is one of the most powerful people in Washington,” Khanna, who met with the Saudi ambassador last month, told Al-Monitor. “He’s likely going to be chairing the House Armed Services Committee, and the fact that he’s on this committee should be very clarifying to the Saudis that when the Democrats are in charge, we are going to stop funding any Saudi assistance if they don’t stop the campaign.”

Last year’s resolution primarily garnered traction among members of the Congressional Progressive Caucus and three members of the hyper-conservative House Freedom Caucus, but hawkish Democratic leaders critical of Iran for supplying weapons to the Houthis have increasingly voiced their frustration with the Saudi coalition in recent months.

“I look forward to reviewing the text of the forthcoming resolution,” House Democratic Whip Steny Hoyer, D-Md., told Al-Monitor. Hoyer also thanked Smith and Khanna “for their leadership in keeping Congress focused on addressing this horrific humanitarian crisis, which has put millions at risk of starvation."

Rep. Eliot Engel, D-N.Y., who is in line to chair the House Foreign Affairs Committee should Democrats win the House in November, also vowed “to do more oversight on Yemen.”

“I’m sympathetic to the security needs of important countries like Saudi Arabia, but it doesn’t come with a blank check to do whatever you want with American weapons,” Engel told Al-Monitor.

Like Hoyer, Engel also indicated that he was open to supporting the Khanna resolution.

But Sen. Bernie Sanders, I-Vt., a potential 2020 Democratic candidate who introduced the Senate bill, believes that the Democrats’ shot at taking both chambers, combined with growing bipartisan backlash to the war, will yield a different outcome this time.

“I think there is more and more support in the understanding that the United States of America should not be involved with Saudi Arabia in this terrible, destructive war in Yemen,” Sanders told Al-Monitor. “It is my strong intention of bringing that privileged [resolution] up again and I think we’ll do better this time.”

Sanders’ efforts in securing a floor vote prompted a broader bipartisan effort to increase oversight on Yemen, resulting in the legislation that forced the Trump administration to issue Tuesday's certification in the first place.

Pompeo was required to certify that the Saudi coalition is taking steps to reduce civilian casualties, ensuring humanitarian aid access through the key port of Hodeidah and engaging in a diplomatic resolution to the conflict.

Pompeo’s justification acknowledged congressional concerns that the Saudi coalition’s civilian casualty rates “are far too high” but argued that the United States is helping Riyadh take steps to reduce civilian harm. This includes $750 million in US training for the Royal Saudi Air Force to minimize civilian casualties.

“With Secretary Pompeo’s certification, the State Department demonstrated that it is blindly supporting military operations in Yemen without any allegiance to facts, moral code or humanitarian law,” said Scott Paul, the humanitarian policy lead at the aid group Oxfam America. “August was the bloodiest month so far in 2018 for civilians in Yemen.”

A Saudi coalition strike August on a school bus in Saada province that killed 40 children and that involved the use of a US bomb led to further outrage on Capitol Hill. The Saudi air campaign has been responsible for thousands of civilian deaths since it began in 2015 with support from the Barack Obama administration, prompting a sharp escalation in Iranian support for the Houthis.

In turn, Tehran stands accused of providing the Houthis with missiles, which the rebels launch into Saudi territory. The justification says, “Several Iranian-backed Houthi missile attacks last year targeted locations in the region where Americans are present.” A New York Times report in May revealed that the United States has stationed troops on the Saudi side of the Yemeni border to destroy Houthi missile launch strikes, stoking further condemnation from lawmakers in both parties.

For his part, Khanna called Pompeo’s certification a “farce” on Twitter.