Moscow and Ankara are actively working through back channels to ensure a smooth settlement in Syria's Idlib, amid ongoing rumors of an imminent fight between opposition groups and Syrian regime forces. 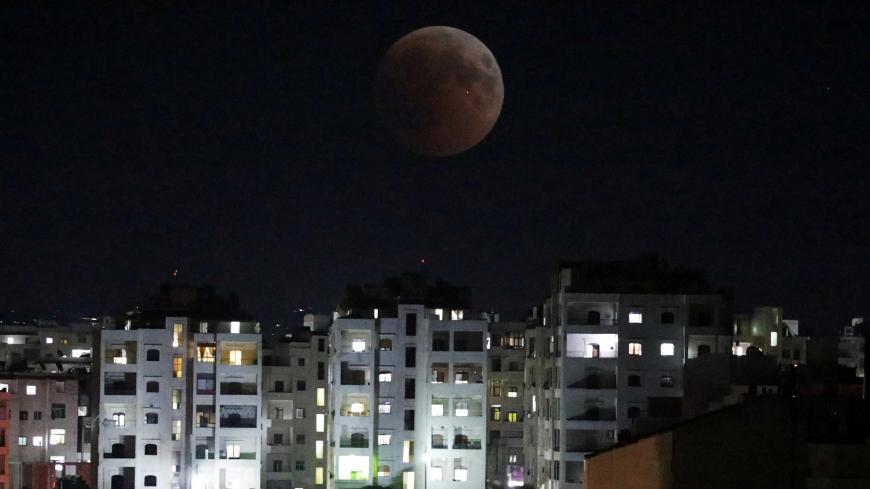 A "blood moon" is seen during a lunar eclipse over Idlib, Syria, July 27, 2018. - REUTERS/Khalil Awshawi

MOSCOW — Russia’s Syria envoy has made assurances that a large-scale operation in Syria’s Idlib is not on the table.

"I’d rather refrain from speaking about the city’s storming or a pending operation. There are too many rumors and they are unfounded. Any large-scale operation in Idlib is out of the question," Russia’s TASS news agency quoted Alexander Lavrentiev as saying July 31, following the 10th gathering of the Astana group in the southern Russian city of Sochi.

“We still hope that both the moderate opposition and our Turkish partners who assumed commitments on stabilizing this area will eventually manage this,” Lavrentiev added.

In recent weeks, concerns about an imminent massive fight over Idlib have been rising in light of the bellicose rhetoric coming from Damascus and ongoing military preparations. Out of the four de-escalation zones, Idlib is the last one that remains outside of Syrian President Bashar al-Assad’s control. Under the Astana agreements, Turkey was entitled to provide security for the area, and it has already erected at least 12 observation points.

In his comments to the Russian newspaper Kommersant on July 31, Syria’s UN envoy Bashar al-Jafaari, who led the Syrian government delegation in Sochi, bashed Turkey for violating its Astana commitments by compromising Syrian sovereignty. He stressed that the stalemate on Idlib may be solved via military means if opposition groups don’t come to terms with Damascus. Earlier, Turkish President Recep Tayyip Erdogan warned such an attack could “completely destroy the Astana accord.”

Multiple evacuations of various opposition groups from around the rest of Syria to Idlib long ago turned the city into a virtual “dumping ground” of all elements that Assad, as well as Iran and Russia, have been fighting against. The evacuations were deemed a temporary fix that would ultimately demand a more feasible solution; Idlib was left to the future because of the higher operational urgency that other fronts demanded. But Idlib's moment appears to have come now that the balance on those other fronts has been tipped in favor of the government forces.

Russia has recently been extremely preoccupied with yet another big regional standoff between Israel and Iran; Moscow has come up with a possible solution involving the Golan Heights that at least in the short term may cool off the heat in Syria’s south should the parties comply with the proposal. Now that northern Syria has come to the forefront, Russia faces the task of managing that region with Turkey; this, to a large degree, has bigger stakes for Russia’s own interests as opposed to just those of Assad.

Moscow and Ankara have accumulated a mixed bag of failures and successes in Syria, and Idlib indeed is a litmus test for what the two have learned about each other’s interests and behavior throughout this time.

As Al-Monitor previously reported, for Moscow, Idlib is vital primarily because the majority of all the anti-Russia Northern Caucasus fighters in Syria have assembled there. This is also becoming a zone from where combat unmanned aerial vehicles (UAVs) fly toward Russia’s Khmeimim air base, posing a danger to Russian military personnel. The security demand to settle accounts with these homegrown enemies away from home territory has been one of President Vladimir Putin’s initial drivers for the Syria campaign, and he is determined to bring that goal to a close. Yet the way through which it can be done is negotiable, and this is where Moscow would want to see Ankara’s collaboration. Prior to the Sochi meeting, Lavrentiev — accompanied by Deputy Foreign Minister Sergey Vershinin and Defense Ministry officials — visited Lebanon and Turkey. In Ankara, the Russian delegation met with Turkish diplomats and military and intelligence authorities to discuss available options for Idlib.

The visit came as yet another sign that a nuclear option vis-a-vis the city is not Russia’s priority at this point. Such an attack would be fraught with far too many complications in relations with Turkey itself and would trigger a new humanitarian crisis and stem into a massive refugee outflow. This, in turn, would undermine Russia’s brainchild initiative on the return of refugees, where Turkey is also seen as a critical partner.

“A certain level of understanding has been reached with Turkey that there should be no offensive on Idlib in the immediate term. We took into account the concerns our Turkish partners have regarding a possible outburst of refugees. Based on earlier discussions and talks in Sochi, we’ll be cooperating in fighting terrorists there and will see what happens,” a source in the Russian Foreign Ministry with knowledge of details told Al-Monitor on condition of anonymity.

The diplomat was referring to the first point of the final statement released by Russia, Iran and Turkey following the Sochi meeting.

“The parties reaffirmed their determination to fight against terrorism in Syria in order to ultimately eliminate DAESH/ISIL [the Islamic State], Nusra Front and all other individuals, groups, undertakings and entities associated with al-Qaeda or DAESH/ISIL as designated by the UN Security Council,” the statement reads.

A separate task for Russia will be to restrain Assad’s fever to take advantage of the momentum his army is having and storm Idlib with force. This isn’t easy from a political and diplomatic perspective, but Damascus simply cannot go on the offensive of such a populated settlement with dozens of heavily armed opposition militants without Moscow’s military support. This, however, neither excludes occasional skirmishes nor means the Syrian army won’t seek to chip off certain neighborhoods from the opposition while trying to avoid unintended clashes with the Turkish military.

“Syria may likely employ a behavior pattern similar to that of the Israel Defense Forces: For one missile from Idlib-based militants, it will retaliate with dozens,” said the Russian diplomat who spoke with Al-Monitor anonymously.

Richard Haas, president of the Council on Foreign Relations, once said, “Turkey may be an ally [of the United States], but it’s not a partner.” For Russia, the duality in the relationship with Turkey is the reverse: Turkey may not be an ally, but it’s a partner.

This is a reminder for Moscow to always stay alert in its relations with Ankara, but also to always seek engagement for the sake of mutually beneficial partnership. The temporary agreement between Russia and Turkey on Idlib may not have settled the conflict of interests between the two or satisfied the immediate demands of Damascus, but thus far it has been exemplary of this duality — which may eventually bring solutions to the long-term challenges Turkey and Russia each face in that area.