A deal brokered by Russia has something for everyone involved — Syria, Israel, Iran and, of course, Russia itself — and has defused at least temporarily what could have become a deadly showdown between Israel and Iran. 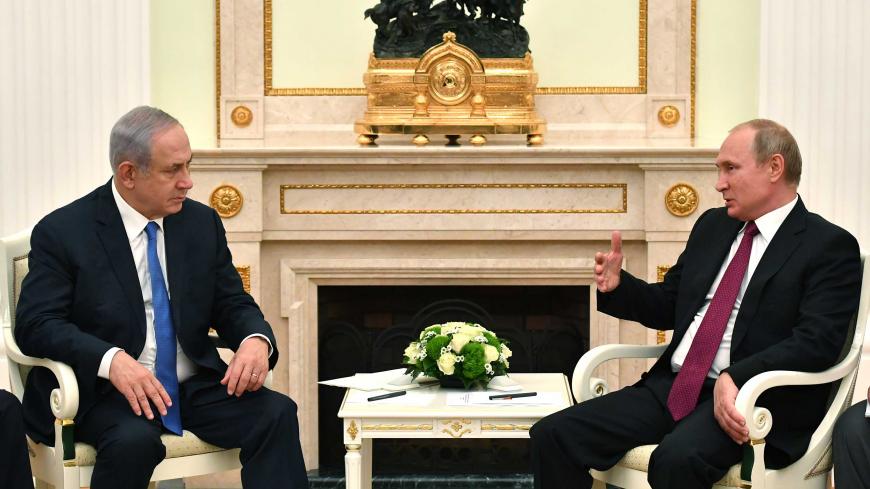 Russia is continuing efforts to enforce an agreement designed to stabilize the situation at the border between Israel and Syria. Under the agreement, Iranian forces and their proxies are pulling back from southern Syria in exchange for Damascus' resumption of control of the Syrian-Israeli border and Israeli recognition of Syrian President Bashar al-Assad’s authority over Syrian territory according to the 1974 borders.

Russia also moved to deploy its military police at the Golan Heights frontier between Syria and Israel and plans to set up eight observation posts in the area. This effort is designed to prevent a direct conflict between Iran and Israel.

On Aug. 1, Russian President Vladimir Putin’s special envoy to Syria, Alexander Lavrentiev, confirmed that Iran's forces and proxies had withdrawn 80 kilometers (50 miles) from Syria's border with the Israeli-occupied Golan Heights. In other words, Lavrentiev declared that Russia managed to seal the deal between Iran and Israel that Moscow had been brokering for the past several months. The last details of this deal were probably finalized July 23, when Russian Foreign Affairs Minister Sergey Lavrov and chief of the Russian General Staff Gen. Valery Gerasimov visited Jerusalem to meet Israeli Prime Minister Benyamin Netanyahu, Defense Minister Avigdor Liberman, General Staff chief Gadi Eizenkot and head of the National Security Council Meir Ben-Shabbat.

However, sources close to the Israeli and Russian governments who spoke with Al-Monitor on condition of anonymity said the main principles of the deal were finalized even earlier, during Liberman’s May 31 visit to Moscow. The visit was timely: Israel and Iran had already been teetering on the edge of a broader — possibly direct — confrontation. On May 10, Iran’s Islamic Revolutionary Guard Corps (IRGC) launched its first-ever massive missile attack on Israel. Previously, Iran’s proxies, but not Iranian forces themselves, carried out missile strikes against Israel. This attack was immediately followed by a massive Israeli retaliation: Israeli air forces struck numerous targets in attacks they claimed caused losses among Iranian troops and their allied forces deployed in Syria.

Nevertheless, the intensified Israeli-Iranian confrontation did not lead to a broader conflict. The exchange of strikes was largely a political move. Some Iranian officials Al-Monitor interviewed, who asked not to be identified because they were not authorized to comment, said Tehran couldn't leave the US-led April airstrikes on Syria unanswered and attacked Israel as an American ally.

Israel, in turn, couldn't leave the Iranian attack without its own answer. Yet no one was ready to cross the red lines further, and Russia did its best to defuse the situation, putting some pressure on both sides. Moscow allegedly threatened to withhold air support for Iran's forces and proxies. On the other hand, Moscow demonstrated that if Israel continues its assertive airstrikes against Iranians and their allies who have moved out of southern Syria, it will supply Damascus with additional means to defend its skies, including S-300 long-range surface-to-air missile systems and TOR-M1 short-range systems. Interestingly, in recent months, the effectiveness of Syria’s air defenses increased.

Some international media rushed to declare that by compelling Iran to leave southern Syria, Russia has taken the pro-Israeli stance. This is not true. First of all, Moscow isn't interested in an Iranian pullout beyond the 50-mile zone, because Russia needs Iranian forces on the ground to ensure Assad’s military capabilities. Moscow also doesn't want to undermine its ties with Tehran in Syria, as that would backfire on a broader dialogue with Iran on other issues important to the Kremlin. Finally, the deal became feasible not because of Moscow’s capacity to pressure Iran, but because of Russia's ability to persuade Iran that the deal is in Iran's own interests, as it will help return southern Syria to the control of Damascus and avoid a situation where it might be accused of excessive aggression against Israel. The latter would inevitably give the United States additional reasons to pressure Iran and undermine the European Union and Russia’s intention to help Tehran save the nuclear agreement despite the US withdrawal.

Moreover, though Iran needs some Iranian fighters in Syria, the importance of Iran's physical presence in southern Syria to keep connections with Hezbollah is overestimated. Arms and equipment supplies can still be easily arranged through Syria via the Beirut airport.

De facto, the agreement on southern Syria implies concessions and gains for all sides, which makes it unique — but hard to sell in the rest of Syria. Russia guarantees that Iran won't control Syria's border with the Golan Heights. Nevertheless, the agreement also deprives Israel of a pretext to launch airstrikes against the Iranians and their allies deep in Syrian territory. Thus, Moscow prevents weakened Iranian proxies in other parts of Syria, where their presence is important to allow the Assad regime to wage war against the opposition. The Kremlin also gets Israel's blessing to re-establish control over the opposition's territories in the south, weakening the opposition and eliminating the area where the alternative government to Damascus could be established by external forces. Finally, Russia defused tensions between Iran and Israel that might have negatively affected the situation in Syria and puts Israel in a situation where it has to recognize Assad as Syria's legitimate ruler.

The deal is also in Israel's interest, and any complaining by Israeli officials should be taken with a grain of salt. Indeed, in July, Israeli authorities again undertook some bold military moves against Iran’s proxies and the Syrian forces and even started to voice official demands to Damascus and Tehran for the withdrawal of Iranian military personnel and Iran’s proxies from all of Syria. These demands weren't without reason, yet Israel is also acting on the principle of "ask for more, as you will always get less." According to experts close to the Israeli government interviewed by Al-Monitor, Israeli officials understand that it's impossible to eliminate Iran’s presence throughout Syria and that the current deal provides the Netanyahu government with the only possible opportunity to somehow decrease Tehran’s influence in southern Syria.

For now, Israel is encouraged by US President Donald Trump’s support, Iran’s weakness and Russia's generally friendly attitude. At the same time, by giving concessions to Moscow and Tehran, Netanyahu ensured Israel won't see a repeat of the IRGC's May missile strikes anytime soon. Currently, Netanyahu is also busy with Palestinian unrest in the Gaza Strip caused in part by Trump’s decision to move the US Embassy from Tel Aviv to Jerusalem. There is little doubt this unrest will continue. As a result, Netanyahu wants to minimize other distractions, and the evacuation of Iranian forces from southern Syria will definitely help.

All in all, this deal is in the interests of all parties involved, which, in turn, guarantees that the region is taking a step back from a direct confrontation between Iran and Israel — at least for the moment.