For Prime Minister Benjamin Netanyahu, Palestinian President Mahmoud Abbas’ objection to the arrangement with Hamas is the last obstacle against burying the two-state solution. 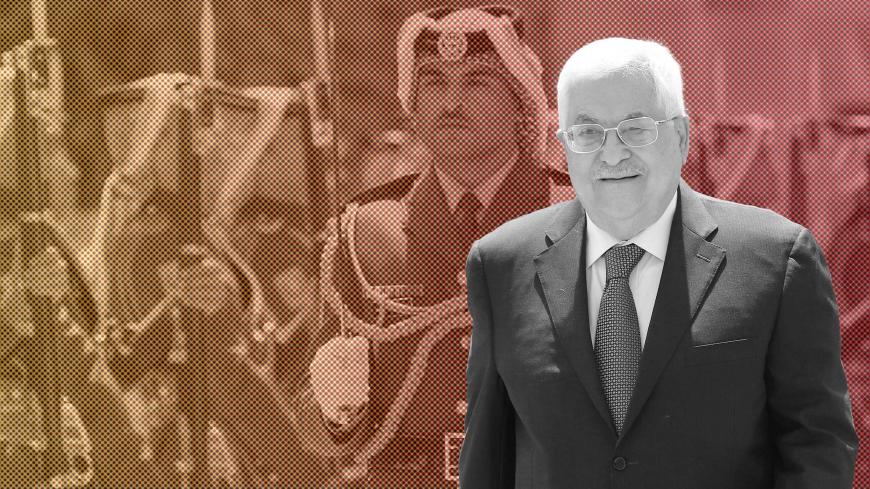 Palestinian President Mahmoud Abbas inspects an honor guard as he arrives to meet with Jordan's King Abdullah II at the Royal Palace in Amman, Jordan, Aug. 8, 2018. - Khalil Mazraawi/Pool via REUTERS

The Hebrew-language headline "The Abbas Obstacle" blared on the front page of Israel Hayom, the pro-Prime Minister Benjamin Netanyahu newspaper. The article itself reported that Palestinian President Mahmoud Abbas was "trying to torpedo" the emerging Israel-Hamas truce agreement on the Gaza Strip. Indeed, Abbas is refusing to go along with what Israel euphemistically dubs the "arrangement" with Hamas. However, contrary to the impression government mouthpieces are trying to make, the Palestinian president is not a pyromaniac. On the contrary.

In his Aug. 18 speech, Abbas declared for the umpteenth time that he would reject any plan not based on the principle of “one state, one government, one law and one weapon” — in other words, his adamant insistence on one unified government for the Palestinians in the Gaza Strip and the West Bank. In a tragic paradox, while Abbas is demanding one sole, united security force and adhering strictly to the security coordination arrangements with Israel in the West Bank, Israel is willing to accept continued terrorism on the part of the Hamas rulers of Gaza. Instead of cheering Abbas for his determined stand vis-a-vis Hamas, Defense Minister Avigdor Liberman accused the Palestinian leader of “trying to drag us into a clash with Hamas” so that he can take control of Gaza. Would Liberman rather Hamas exploit its entrenchment in Gaza under Israeli auspices, and of Abbas’ weakness, to take control of the West Bank?

Abbas’ objections to the so-called “arrangement” on Gaza does not reflect any desire to walk away from the 1993 Israeli-Palestinian Oslo Accords. At an Aug. 13 meeting with Israeli Arab leaders, he was critical of the Palestinian flags some Israeli Arab activists carried at a recent rally in Tel Aviv against the Nationality Law. As he explained, he was seeking to remove the Israeli flag from the West Bank — not to hang a Palestinian one in the heart of Tel Aviv.

It does not take the head of the Shin Bet security service to understand that negotiations with Hamas, and more so an agreement with the organization, strengthen the ruler of Gaza and hurt its rivals from the pragmatic camp led by Abbas. There is no better proof of this than Israel’s 2005 unilateral pullout from the Gaza Strip, which marks its 13th anniversary this week. Israel’s evacuation of its Gaza settlements effectively scuttled the roadmap drawn by the Middle East Quartet — the United States, Russia, the UN and the EU — that set out a timetable and agenda for the evacuation of Israeli settlements and negotiations on ending its 51-year occupation of Palestinian territory. The Israeli pullout played into Hamas' hands and contributed to its election victory a year later and its de facto ousting of the Palestinian Authority from the Strip.

Khaled Meshaal, then head of the Hamas political bureau, tried to provoke Abbas at the time by crowing that Gaza was freed by the “weapon of resistance” and not by futile negotiations with Israel. Other Hamas officials called for the “resistance” to shift its focus to the West Bank and liberate Jerusalem, Acre, Haifa, Safed, Nazareth, Ashkelon and all the areas considered by them as Palestine. Senior Hamas official Mahmoud al-Zahar noted, “We wish to spread the ‘culture’ of resistance” [of armed struggle]. On the other hand, Abbas said the PA was seeking to instill a “culture of peace.” And so ever since the 2005 disengagement, Israelis are under the impression that, despite exiting Gaza, they are still under attack. The Israeli conscious is focused on pictures of Israeli children frightened by shelling from Gaza and on the sounds of the sirens warning of another rocket fired from the Strip. Their conclusion: Israel does not have a partner for peace.

Although the writing has been large on the wall since the 2005 withdrawal from Gaza, Shin Bet chief Nadav Argaman recently took the trouble to warn Israeli politicians of the ramifications of a deal with Hamas. At one of the recent Cabinet sessions on the subject, Argaman pointed out that pushing Abbas out of the Egyptian-mediated Israel-Hamas negotiations would boost Hamas’ standing in the West Bank and prove to the Palestinian people that violence is the only way. The warnings by the senior security official went unheeded. The contacts with Hamas proceeded at an accelerated pace.

Liberman even went so far as to address the Palestinian public behind Abbas’ back. In a clip posted over the weekend on the Facebook page of the Government Coordinator of Activities in the Territories, Liberman said, “We can be your greatest partners in the effort to turn the refugee camps into the Singapore of the Middle East.” And what do the Palestinians have to do to turn into Singaporeans? “Recognition of the right of Israel to exist in peace, demilitarization, and resolution of the issue of the captives and MIAs,” said Liberman, referring to Israel’s demand for a return of Israeli civilians and soldiers’ remains held by Hamas. And what should they do if their leadership refuses? “Replace your leadership,” advised the man from the West Bank settlement of Nokdim.

Expecting Hamas to recognize Israel’s right to exist is about as realistic as expecting Liberman to join the Israeli-Arab Balad Party. And why would they, the 2 million Palestinian residents of Gaza, replace Hamas with a more moderate leadership? What has the PLO gained by its recognition of Israel’s right to exist in peace within the 1967 borders? To what extent did the ongoing PA security coordination with Israel bring residents of the West Bank any closer to Singapore-style independence? Gilad Erdan, Israel’s minister of public security, declared that he was “not ashamed to say” that the main goal of a cease-fire with Hamas was calm and security for Israelis — not a word about an agreement on ending Israel’s occupation and regional peace.

Abbas is the stronghold of sanity here, but he is portrayed as the biggest obstacle — perhaps even the final one — to the burial of the Oslo Accords and their proscribed two-state solution. “Arrangement” is synonymous with status quo — the strategic enemy of the paradigm for resolving the Israeli-Palestinian conflict. The “arrangement” between the Netanyahu government and Hamas is a tried and tested way of managing the conflict in the manner espoused by Israel’s political right and the rejectionist Palestinian organizations — managing, instead of resolving.

This is the way to achieve a respite for residents of Israel’s south, to draw praise from the international community and the Israeli left for opening the crossings into Gaza, to divide the various Palestinian factions and to portray Netanyahu as a levelheaded leader wary of war. Most importantly, this is the way to ensure that the people forcibly ruling millions of Palestinians and turning Israel into an apartheid state maintain control of the biblically inspired Greater Land of Israel.