Russia-led regional payment network could blunt US sanctions on Iran

Russia is reportedly expanding on previous talks with Iran to create a regional integrated payment network. 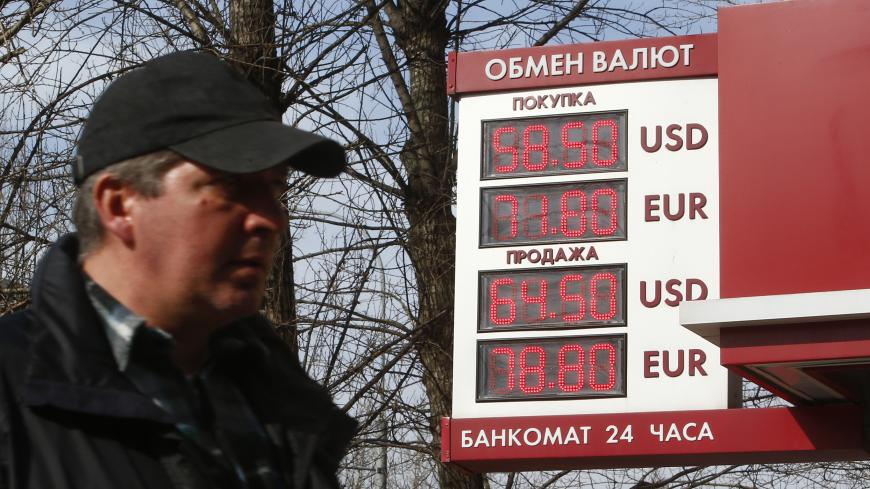 A board with the currency exchange rates of the US dollar and the euro against the Russian ruble is on display outside a bank branch in Moscow, Russia, April 10, 2018. - REUTERS/Sergei Karpukhin

Russia is reportedly making preparations to establish a regional integrated payment network. Iran understandably wishes to join such an endeavor. But what will such a network look like, what will its implications be for Iran and the region, and how will it be received by other countries, especially the United States?

The news of the apparent Russian initiative was first publicized by Aboutaleb Najafi, the CEO of Informatics Services Corporation, an executive arm of the Central Bank of Iran (CBI) that was established in 1993 to create and operate Iran's comprehensive banking automation system and payment networks. Najafi did not disclose many details, while media coverage in Russia has been scant. But both sides have previously attested to the necessity of gradually moving away from the US dollar and dealing in national currencies. Other countries such as Turkey have also been named as potential partners to join such an initiative.

According to an official at the CBI with knowledge of the issue who spoke to Al-Monitor on condition of anonymity, joining a Russian payment network means that a significant portion of the need to employ physical banknotes will be eliminated, which will be a major benefit for Iran.

"We currently still rely too much on banknotes to conduct our [trade] deals, and the sanctions will definitely not make this situation easier," he told Al-Monitor.

On the other hand, he said, the payment network could serve as a gateway for Iran to notably boost its commercial ties with other member countries. When contacted for comment, both Najafi’s office and the CBI source refrained from providing further information about the payment network at this time, but it stands to reason that the mentioned region includes the 10 post-Soviet republics of the Commonwealth of Independent States (CIS).

Official customs data published by Iran's Trade Promotion Organization indicate that the country's total nonoil trade with CIS member states stood at $3.94 billion during the previous Iranian year that ended March 20, down from $4.64 billion in the year before. Russia accounted for $1.03 billion of that amount — down by 42.14% year-on-year — to rank 18th on the list of Iran's biggest trading partners.

Against this backdrop, the reported efforts to establish a regional payment network could act as a launch pad to boost Iran's trade with the CIS and better realize its long-term goal of expanding nonoil trade to decrease its dependency on oil. This is especially important since the volume of trade between Iran and CIS member states is a far cry from the $15.46 billion and $14.36 billion nonoil trade volume registered in the previous Iranian year with the Gulf Cooperation Council and the Economic Cooperation Organization, respectively, which have similar numbers of member states.

There are other dimensions to consider, too. With stronger trade and economic ties come more robust political and cultural relations. Russia is already a major ally, as Iran is increasingly gazing eastward to strengthen connections in the face of US hostility. In this vein, Iran could build more lasting and mutually beneficial ties with CIS member states and better promote the cultural ties that it says it seeks. But, of course, none of this can materialize in the short-term, as the idea for a regional payment network is still new and has many potential snags.

According to Najafi, Russia only made the decision to establish the network in recent months, something he called a "change in strategy." The original idea, which was first floated in September 2016, was to integrate Iran’s and Russia’s bank card systems, allowing Iranian and Russian citizens to use their bank cards in each other's countries. Both sides agreed to initially implement the scheme on a limited scale so that Iran could first upgrade its technical infrastructure with the help of Russia's BPC, a recognized provider of e-payment solutions in the international financial industry. The first phase was successfully implemented by May 2017, according to the CBI, and the regulator promised that the scheme would be fully operational by August 2017. But it was hit with several delays due to technical problems on the Iranian side, as the country doesn't employ EMV chip technology across all its financial institutions.

In addition to Russia, Iran has also proposed bank card system integration with at least seven other countries, namely Japan, China, Azerbaijan, Iraq, Turkey, Oman and Uzbekistan. However, technical deficiencies in tandem with US sanctions are liable to present significant challenges. Along these lines, the CBI source told Al-Monitor, "We need to do a lot of upgrading before we can realistically say we'll be able to join Russia's payment network."

"That is tied to how Russia decides to go ahead with this," he explained. "One way is to issue a uniform card for all member countries and have designated banks hand them out to the representatives that will be using them. But since we're talking about integrated bank card switches, it's more probable that everyone should be able to use their bank cards in all member countries, and that takes cooperation and negotiations on a whole other level."

Then, he pointed out, there is the issue of ever-evolving banking regulations, implementing appropriate due diligence and know-your-customer guidelines, and adhering to anti-money laundering and combating terrorism financing regulations of the Financial Action Task Force. All of these factors and considerations will make execution of the project more difficult for Russia, but exponentially more so for Iran, which is lagging years behind in terms of compliance with international standards and regulations.

By the time a regionwide payment network sees the finish line, other countries may have mounted similar initiatives, since the rapid growth of financial technologies and entry of potential game-changers — such as blockchain-enabled solutions — has opened countless new avenues. Decades-old political rivalries will also mean that the project will have fierce opponents.

"The US will undoubtedly move to hamper this project at various stages through sanctions and rhetoric," the CBI source acknowledged to Al-Monitor.

Regardless of progress on establishing the payment network, Iran would do well to focus on reforming its banking sector and accelerating the process of upgrading its financial infrastructure to better adhere to international regulations and to become more technically capable of realizing sanctions-proof trade solutions. If not, the current issues will continue to loom large — even in the unlikely event that Iran suddenly re-enters the global financial system.