Russia and the United States have very different approaches and goals in the Middle East, but they could lead to a solution in Syria. 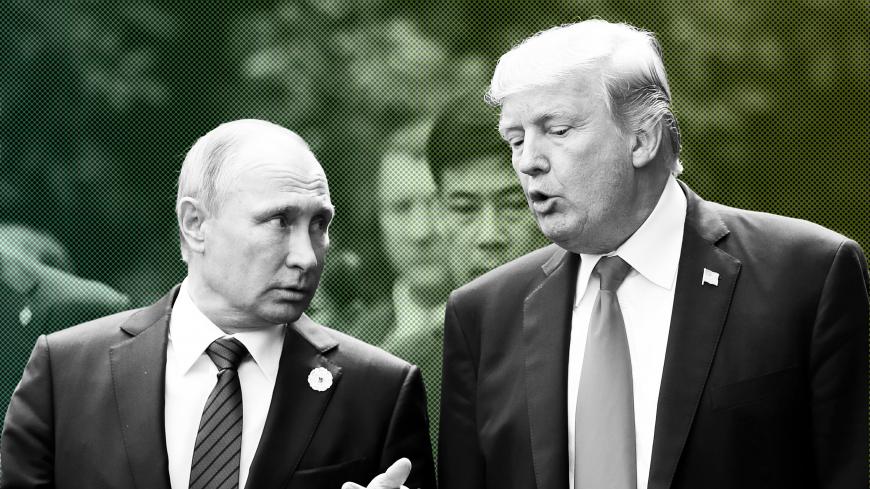 Modern politics is remarkable. Until recently the situation in the Middle East, and Syria in particular, seemed to have come to the deadest of ends, to the blindest of alleys when assessed in terms of political results. It was a tangle of incompatible interests involving a legion of different actors and a hopeless proxy war between Moscow and Washington.

Now, here comes a sudden U-turn. If we can trust various leaks ahead of the long-awaited summit between the two leaders, Syria is the only matter US President Donald Trump and his Russian counterpart Vladimir Putin can be expected to agree on July 16 in Helsinki. Why is this the case?

To start with, the “grand bargain” on Syria analysts believe is possible will be neither “grand,” as Syria today is not the focal point for Russia or, more importantly, the United States, nor can it be referred to as a “bargain” per se, since the situation has already taken shape and the presidents will just need to formalize it.

Since it became apparent — quite a long while ago — that the overthrow of President Bashar al-Assad's regime was off the agenda, US policy in Syria has blurred. This also happened during President Barack Obama’s term, and the tedious diplomatic marathon of Russian Foreign Minister Sergey Lavrov and US Secretary of State John Kerry in 2016 was a Sisyphean task: work for work’s sake rather than a drive to get a result. For Trump, Syria has been a burden he dreamed of farming out to Moscow. Following the defeat of the Islamic State, Washington’s aims regarding the region have been a complete mystery. The airstrikes against Assad’s forces in 2017 and 2018 were important in and of themselves. It was muscle-flexing rather than manifestation of a strategy. Trump has made no secret that he deems the US withdrawal from Syria necessary.

Trump simplified US policy in the Middle East. He placed a premium on Israel and Saudi Arabia for ideological and mercantile reasons, respectively. The White House is not interested in undoing or even cutting the regional Gordian knot right now. In a way, it is a consistent approach. The main difficulty for Trump is how to deal with the aftermath of developments from previous years.

Russian policy is more complicated: it is in part paradoxical and, oddly enough, complementary to the US one. Russia’s political and diplomatic success during the past three years surpasses expectations as well as initial objectives. Moscow had several reasons for a military operation, such as to counter a terrorist threat, to end the semi-isolation caused by the conflict in Ukraine and to ascend to the position of a global player. But hardly anyone could imagine that Russia would become the most influential external actor in the region, with everyone now expecting something from Moscow.

There are two reasons for this unexpected triumph. The first is Russia’s clear and consistent position, which hasn't wavered since 2011. Moscow believes that only the existing regimes can contribute to stabilizing the region, and that any change would worsen the state of affairs. Amid the see-sawing of all other players, this position looked rock solid and respectable. Second is the US stance's lack of clarity, which eventually led to its withdrawal as the leader.

Moscow, in the thick of the action, is maintaining a functioning, however complex, system of relations with all the regional players, without exception.

The combination of military force with subtle and proactive multilateral diplomacy paves the way for strengthening the central authorities in Syria. Russia is showing uncharacteristic flexibility and taking into account the security interests of the key players — Turkey, Israel and Iran. It is also prodding the intra-Syrian groups into interacting quite insistently, even if not always successfully.

The United States seeks to sustain its presence in the Middle East and if necessary to exercise its clout over the developments. However, it's reluctant to incur costs and become entangled in a complex web of relations among regional players. Washington’s reliance on Israel and Saudi Arabia as well as its ad hoc alliance with the Syrian Kurds are a means to this end. Therefore, the approach is minimalist and selective.

Russia, on the contrary, aims to engage all the regional stakeholders since, in its opinion, Damascus can oversee the process of rebuilding Syria only on the condition that all the internal and external forces agree — or at least remain neutral. (Moscow sees the survival of the Syrian regime as the only way to preserve Syrian statehood.) Both consent and neutrality come as a product of arduous and sometimes fruitless work. But the goal can only be achieved through an “inclusive approach,” as Russian diplomats like to call it.

What does this mean for US-Russian relations in Syria? It's an opportunity to reconcile their interests. Trump prioritizes the containment of Iran and the security of Israel. It can be easily assumed that after the summit he'll be eager to make an optimistic statement similar to the one released after his meeting with Kim Jong-un, which was, “There is no longer a nuclear threat from North Korea.”

Trump would be willing to say that there's no threat to Israel from Syria and that Putin will help drive Iran away from the Israeli border. This is what his electorate should hear. And it can be achieved thanks to long efforts to marry the security interests of Iran and Israel in Syria, with neither Trump nor other US representatives being the main protagonists. On the contrary, the key players include Israeli Prime Minister Benjamin Netanyahu and Putin — who have a high level of trust between them — as well as representatives of the Syrian government and top Iranian officials. Contacts are apparently indirect and delicate, with no formal arrangements possible.

However, everyone understands that some sort of balance of interests is required. Trump has a good opportunity to join the process at the 11th hour, to solemnly give the US stamp of approval and to derive some benefit. It will suit everyone, including Russia, which seeks to attain only one goal: It needs America to maintain a restrained position in Syria, as the United States could derail any process in myriad ways.

The interaction between Russian troops and the US military is central to the situation in Syria. They are perfectly aware that it's necessary to act carefully and steer clear of unnecessary escalation and collisions, which could be fraught with consequences beyond their control. The communication channel between their militaries in Syria is perhaps the most effective one they have at present. They are using good Cold War practices in this region, even though such approaches are irrelevant elsewhere.

As an analysis of their interests reveals, Putin and Trump can reach an understanding on Syria. That's where the Syrian case differs markedly from other bilateral issues — for example, from what appears to be a deadlock over Ukraine and from the issues marked by strategic stability, where the parties' intentions haven't been stated.

Some public and political circumstances stand in the way of the Syrian accord. Since the early days of the conflict, and especially after Russia’s military intervention, the Syrian war has been perceived as a proxy battle between Moscow and Washington, an indispensable zero-sum game that should have a winner and a loser. This perception was exacerbated by the inertia of the 2000s, when the expected outcome of such collisions was replacing a dictatorial “bad guy” with a democratically elected “good guy.”

In Syria, the mechanism glitched and the model may have become irrelevant, but from the ideological perspective it's very difficult to abandon it altogether. Even Trump, who wants to avoid becoming embroiled in regime change, talks about the “animal Assad” and makes other remarks that vein. However, the only lesson, if any, the Middle East teaches is that rigid ideological or idealistic approaches always backfire. Therefore, pragmatic realism — though some might call it cynical realism — is much more prudent.