Is Russia a better fit than the EU to help relieve Iran from sanctions?

While Iran would prefer EU help when it comes to relief from US sanctions, Moscow might be better suited to this role than Europeans. 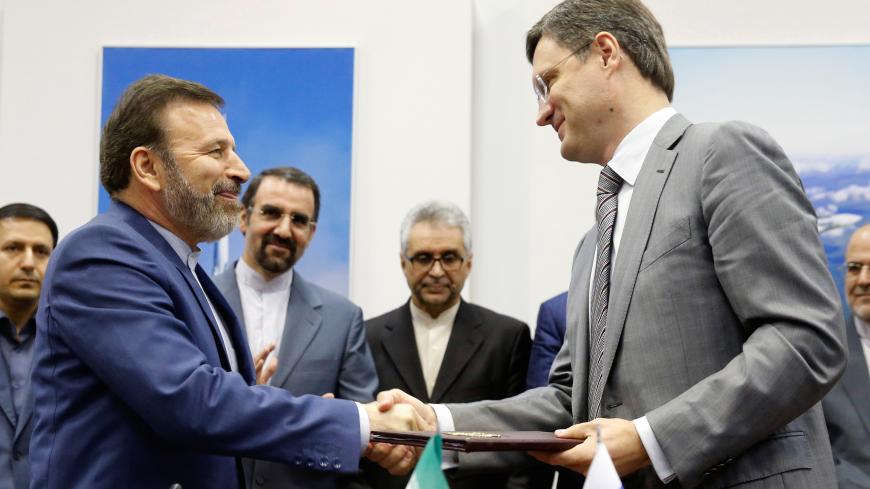 Iranian Oil Minister Bijan Zanganeh visited Moscow on July 23 for talks with his Russian counterpart Alexander Novak. For Moscow, the meeting was intended, among other reasons, to demonstrate that the Kremlin had taken a strategic decision to keep its energy majors in Iran. The two ministers also discussed their cooperation at the Gas Exporting Countries Forum and Russia’s plans to turn the OPEC+ deal into a permanent agreement.

The visit is critical when analyzed against the backdrop of the bigger picture.

Despite frustrations with European leaders, Iran still hasn't given up on the idea that the EU might help the country evade US sanctions or, at least, ease their burden. Tehran, however, is actively developing its plan B: If Brussels ultimately fails to be helpful in this regard, the Islamic Republic can always try to intensify its contacts with Russia, which has demonstrated a clear desire to retain its presence in Iran’s economy in spite of economic sanctions. At a first glance, Tehran finds Europe more appealing. It is more economically and politically capable than Russia, and, in the historical memory of Iranians, Iran's past relations with Europe contain far fewer awkward and unpleasant moments than between Moscow and Tehran. In practice, however, it’s more complicated.

Indeed, there are at least two European initiatives to help Iran dodge further sanctions pressure. The first is purely political: The EU wants to secure the remnants of the Joint Comprehensive Plan of Action (JCPOA) and defuse the political situation around Iran. This will be achieved by conducting negotiations with Iran on different regional issues to show the international community that Tehran can be a team player. It will, thus, deprive the United States of opportunities to call this country a troublemaker. Negotiations between the EU and Iran on Yemen that were launched in February are part of this initiative.

The second set of steps designed by the EU to protect Iran is purely economic. While unable to prevent its large businesses from withdrawing from Iran, the EU plans to encourage the mid- and small-sized businesses with few connections to the American market to go to Iran.

These two initiatives will inevitably face a number of problems. First, each initiative is time-consuming and will not bring immediate relief to Iran. In the short run, the Europeans can do nothing about Iranian sanctions but make bold political statements to support Tehran morally and to keep it a member of the JCPOA while the Europeans think about what to do next. Meanwhile, Iranian President Hassan Rouhani’s own time in office is limited, and the longer he waits for European help, the more diminished are his chances to arrange the victory of a successor during the next presidential election.

Second, Tehran is clearly declaring its readiness to discuss regional issues with the EU, but it is not clear how far it is ready to go to reach final agreements and whether its concessions will satisfy the other players in the Middle East, such as Saudi Arabia and Israel. It is also unclear whether the US administration under Donald Trump will accept them.

Third, the economic measures represent the last resort solution. The mid- and small-sized business will be able to help Iran survive but not develop under the sanctions. Moreover, this plan might work unless the United States uses tougher secondary sanctions against Iran and its counterparts that would create additional problems for facilitating financial and transport logistics of EU-Iran economic ties.

Finally, the measures adopted by the EU to help Iran will be implemented as a joint European action. In other words, the EU members should first come to an internal consensus on these measures. However, there are clear differences in motivations and stances between European players vis-a-vis Iran that will not help the EU quickly work out the united plan. Thus, there are countries such as Italy, Spain, Greece and Denmark that are genuinely interested in saving ties with Iran due to, first of all, economic motivations. For Germany, France, Austria and the UK, political drivers are no less or even more important in determining their approaches to Tehran. Then there are even EU members such as Poland that support Trump's decision. Warsaw not only wants to demonstrate its loyalty to the United States but also believes that by helping the Americans pressure Iran, Poland will be bashing Iran's ally, Russia, in the Middle East. All in all, the Europeans have a long way ahead before they will be able to work out an effective plan of action.

These calculations help Moscow create its own options for closer cooperation with Tehran. This month's Moscow visit of Ali Akbar Velayati, the top foreign policy adviser to Iranian Supreme Leader Ayatollah Ali Khamenei, not only imparted political messages but also was intended to discuss the situation around the JCPOA, the options available to help Iran develop its oil sector and ensure oil exports.

Velayati's statements on Russia’s alleged readiness to invest $50 billion in Iran’s oil and gas industry spurred controversy at home. Russian officials later denied commenting on the issue due to Russia's unwillingness to draw much attention to the activities of its companies in Iran, since this would defy US sanctions. In return, Russian officials commented on their readiness to continue the oil-for-goods deal. This, in turn, was received negatively in Iran. For a number of Iran’s politicians, such a deal symbolizes a violation of Iran’s independence. As a result, Foreign Minister Mohammad Javad Zarif had to deny that this deal would be implemented, though he pointed at other and bigger options for Russian-Iranian cooperation.

This incident did not affect Moscow and Tehran's plans to cooperate in the oil and gas sphere. Even before Velayati’s visit, Gazprom had already launched a new round of negotiations with Iranian authorities on its participation in the development of four gas fields: Kish, North Pars, Farzad-A and Farzad-B. Apart from that, Gazprom continued to negotiate with the Iranian party on the joint construction of the Iran LNG plant. The talks also involved discussions on the establishment of a joint Russian-Iranian company to construct and operate an Iran-Pakistan-India pipeline.

The latest visit by the Iranian oil minister to Moscow is yet another indication that Russia and Iran are steadily exploring mutually beneficial options in this field. Russia remains of a strong opinion that it is important to ensure Iran’s capabilities to export at least some portion of its oil. Moscow is thus sending a clear signal to Tehran and others that it is not going to support Trump’s proposals to OPEC and other producers to compensate for the withdrawal of Iran from the oil market.

All in all, while the economic and political capacities of the EU are objectively stronger than those of Russia, Moscow might be more prepared to help Tehran live under the US sanctions.