An Israeli court has ruled that the Shin Bet's interrogation methods used on Jews suspected of terror attacks against Palestinians were unacceptable, freeing a confessed arsonist implicated in the murder of the Dawabsha family. 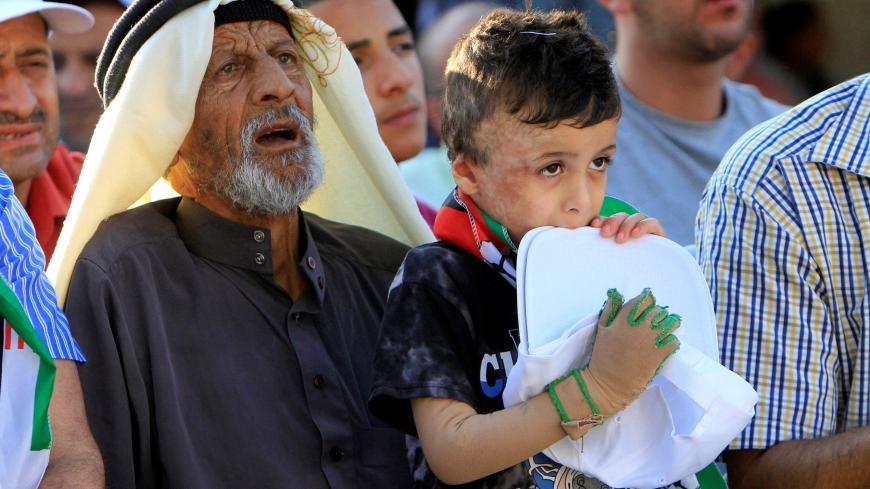 Palestinian boy Ahmed Dawabsha, who suffered severe burns in an arson attack on his family home last year in which his younger brother and his parents both died, is carried by his grandfather during an event marking the first anniversary of the incident in the West Bank village of Douma near Nablus, West Bank, July 31, 2016. - REUTERS/Abed Omar Qusini

A Jewish Israeli charged with the 2015 murder of a Palestinian family was freed July 12 and remanded to house arrest under electronic monitoring. The accused, identified only by the initial A., was detained two and a half years ago and charged with involvement in torching the home of the Dawabsha family in the West Bank village of Douma in July 2015, killing Sa’ad and Riham and their 18-month-old son Ali and severely injuring 4-year-old Ahmed. The case set off a storm, with many Israelis refusing to believe that Jews were responsible for such a horrific attack. The Shin Bet arrested several suspects four months later, treating them as terrorists and using interrogation methods accordingly. It initially denied them access to lawyers, as the Shin Bet often does with Palestinian detainees, in an effort to uncover the Jewish terror cell operating in the West Bank and threatening to ignite an intifada.

The suspects claimed interrogators had roughed them up and subjected them to other physical abuse, exactly as the Shin Bet does when interrogating Palestinian suspects considered “ticking time bombs.” This term is used in cases when a detainee is suspected of holding information that could reveal plans for imminent terror attacks. Under interrogation at a Shin Bet facility, a right-wing activist named Amiram Ben-Uliel confessed to throwing firebombs at the Dawabsha family home. The other suspect, whose name is being withheld as he was a minor at the time, admitted to being involved in planning the attack with Ben-Uliel. In 2016, serious charges were brought against them.

After being allowed to meet with lawyers hired for them by the right-wing legal aid organization Honenu, the suspects claimed their confessions were extracted by force and they had admitted to an act that they had not committed. On June 20, the Lod District Court ruled invalid the confessions obtained by so-called “special means.” “These means severely violated the accused’s basic right to the integrity of body and soul. It also hurt the accused’s dignity,” the three judges ruled. Other confessions made by the accused when not under torture were deemed admissible.

“Obviously the Shin Bet caused physical pain and suffering to the suspect under interrogation to get him to confess,” said Yitzhak Bam, Ben-Uliel’s lawyer, after the court’s ruling. “A legal system that respects human dignity cannot accept as evidence confessions extracted under physical suffering.”

After the July 12 decision to release A. to house arrest, his father said, “The court’s decision validates what we claimed throughout: Our son underwent severe torture under interrogation.”

The ruling surprised the Shin Bet. In a statement, the organization said Shin Bet interrogations are an important and central element in thwarting terrorism of any kind and solving cases of terror attacks. Information obtained during investigations saves many human lives and makes a huge contribution to the security of the state.

Nonetheless, unlike the praise usually enjoyed by the Shin Bet for using “special means” against those considered “ticking time bombs” and thus foiling terror attacks, this time the agency came under fire by the court. Is a basic right to the integrity of body and soul reserved only for Jewish suspects?

The issue of the Shin Bet’s interrogation methods, meaning the use of physical violence and torture, has come up in Israeli courts numerous times. Almost every Palestinian detainee suspected of terror activity is familiar with the method known as “shaking up”; the so-called “shabah” method of tying suspects to low chairs; the “frog crouch” method depriving suspects of sleep; and exposing suspects to very low temperatures, also known as the “refrigerator” method.

The Shin Bet argues that when it comes to “ticking time bombs,” such methods are essential to foil planned attacks and save lives. In a landmark 1999 ruling on a petition brought by the Public Committee against Torture, the Supreme Court outlawed torture, ruling that a reasonable interrogation is one conducted without torture, without cruel treatment of the subject and without humiliation.

Still, the Shin Bet’s “special” methods have not stopped. The testimony of hundreds of Palestinians presented in a 2017 report by the B’Tselem human rights organization and the Public Committee against Torture clearly illustrated that “physical pressure” to elicit confessions continues and the legal system accepts it as fact.

“Military judges almost automatically sign off on motions for remand in custody and effectively sanction the continued abuse and inhuman conditions,” according to the report. “The State Attorney’s Office and the Attorney General have thus far provided [Shin Bet] interrogators with full immunity. Finally, [High Court of Justice] judges regularly reject petitions seeking to overturn the denial of detainee’s rights to meet with legal counsel, clearing the way for continued abuse.” The report further states that “years of monitoring by human rights organizations reveal" that "since 2001, not a single criminal investigation has been launched into a complaint against a [Shin Bet] interrogator, despite hundreds of complaints being lodged with the relevant authorities.”

There is no case in memory of a military tribunal disqualifying a confession by a Palestinian terror suspect on the grounds that it was obtained by force and under torture.

On the other hand, a civil tribunal has now set a precedent for disqualifying confessions elicited under duress. It remanded a terror suspect to house arrest even after he had confessed to involvement in terror activity when not being tortured.

It’s easy to guess how Israelis would react to a decision, whether by a civil or a military court, to release a Palestinian attacker who murdered a Jewish family only because his confession was obtained by torture. Would it not send shockwaves throughout Israel? Would leaders of the political right not condemn the court for cheapening the lives of victims of murderous terror attacks?

Probably without intending to, the Lod District Court judges have issued a warning to Shin Bet interrogators and sent a warning to the military tribunals: From now on, confessions extracted by torture cannot be glossed over.