Hamas leader Yahya Sinwar puts the release of Palestinian prisoners in Israel ahead of any proposals to ease the decadelong siege on the Gaza Strip. 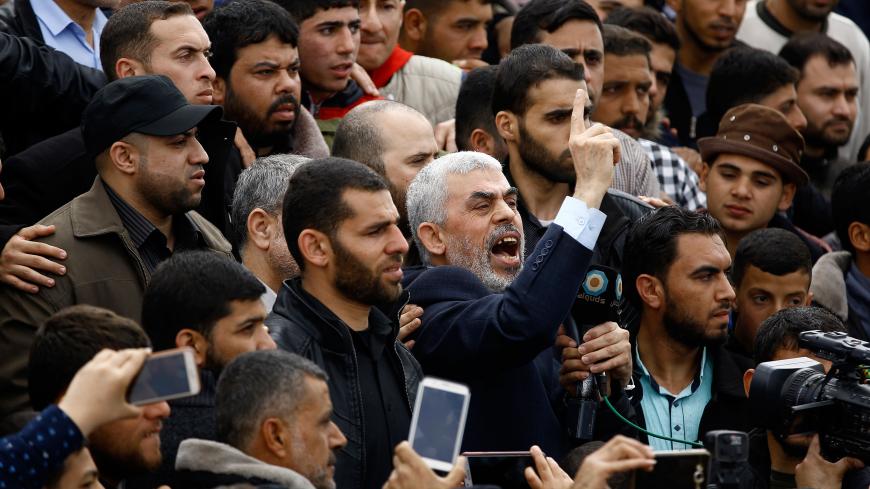 Hamas leader Yahya Sinwar (C) shouts slogans as he takes part in a tent city protest near the border with Israel, east of Jabaliya in the northern Gaza Strip, March 30, 2018. - MOHAMMED ABED/AFP/Getty Images

What is more important to Hamas — the release of its inmates from Israeli jails or improved conditions for Gaza’s 2 million residents? This is not a hypothetical question. It is a real dilemma for the Hamas leadership and the movement’s Gaza chief Yahya Sinwar as they mull over various suggestions to relieve the humanitarian crisis in the Gaza Strip.

London-based Asharq Al-Awsat newspaper reported on June 30 that the Hamas leadership was examining three proposals submitted by different intermediaries. One was conveyed by UN Mideast envoy Nickolay Mladenov, one by an Arab figure described by the paper as having strong links with Hamas and a third through a foreign state also with links to Hamas. The proposals include humanitarian aid and the full opening of crossings to and from the enclave for the passage of goods and persons — in return for the bodies of two Israeli soldiers killed in fighting in Gaza in 2014, Oron Shaul and Hadar Goldin, and of the Israeli civilians believed held by Hamas.

Among the proposals under scrutiny: establishing a joint Israeli-Palestinian industrial zone near the Erez border crossing into Israel, building a floating pier off the island of Cyprus through which goods destined for Gaza would be shipped, and a significant increase in the power supply to the Strip. Other proposals include allowing the entry of fuels into Gaza, easing Egyptian restrictions by establishing an industrial zone near Gaza’s border with Egypt that would provide jobs for the Strip’s residents and permanently opening the Rafah crossing into Egypt for the passage of food, raw material, fuels and more.

Attempts at resolving the Gaza crisis stem from a US effort to resolve the humanitarian crisis in Gaza, in conjunction with the Gulf states, as a preliminary stage for rolling out the Trump administration’s much touted peace plan for the region.

These proposals are the very goals Hamas has been trying to achieve since Israel imposed its blockade on Gaza when Hamas took control of the enclave in 2007. The movement’s leaders were willing to sacrifice thousands of Palestinians in armed clashes with Israel over the past decade for the sake of a significant Israeli easing of its blockade. However, now that various proposals are on the table, the Hamas leadership is rejecting them out of hand. Instead of embracing them, launching intensive negotiations and bargaining for additional Israeli concessions, Hamas refuses to even consider a return of the soldiers’ remains and of the Israeli civilians as part of any deal. It insists that these matters be discussed as part of a separate deal leading to freedom for Palestinian prisoners.

A Palestinian source in the Gaza Strip told Al-Monitor that Sinwar is the main obstacle to an agreement since he insists on an Israeli commitment in advance to a mass Palestinian prisoner release of the magnitude that Hamas achieved in 2011 in return for Israeli soldier Gilad Shalit. Shalit was freed after five years in Hamas captivity in return for 1,027 Palestinians from Israeli jails.

Sinwar was the one who pushed more than any other Gaza leader for reconciliation with Fatah, even at the cost of handing over civilian matters in Gaza to Fatah. He believed that reconciliation was imperative in order to improve conditions in the Strip. But now, faced with proposals to improve Gazans' living conditions, he is unwilling to budge from his pledge to Hamas inmates to obtain their release.

He himself was freed in the Shalit exchange and sees himself as “the father of Palestinian prisoners.” In August 2017, following the resignation of Lior Lotan, the chief Israeli negotiator on the issue of missing and captive Israelis, Sinwar described to journalists in Gaza his determination on the prisoner issue so close to his heart. “The Shalit deal was delayed for two years because the mediators offered us things that did not reach the threshold of [Hamas'] demands," he said. While a prisoner, Sinwar added, he held out for a more “honorable” deal for the release of Palestinian inmates that Israel was nixing.

Given his steadfast position, Sinwar seems willing to forgo concessions for humanitarian relief in Gaza as long as he is not perceived as having violated his pledge to the prisoners held by Israel.

Sinwar served 23 years in an Israeli jail. Ahmed Jabari, the former head of the armed Hamas militia Izz ad-Din al-Qassam Brigades, who held Shalit in custody, insisted Sinwar be included in the swap. Jabari was assassinated in 2012. During his lengthy sentence, Sinwar cemented his position as the leader of all Hamas prisoners in Israel. Last year he also underwent brain surgery in Israel to remove a tumor.

Given his experience, Sinwar should be familiar with Israeli society and the country’s political mindset, and with the way Israeli leaders adopt decisions. Prime Minister Benjamin Netanyahu and Defense Minister Avigdor Liberman have reiterated time and again that Israel would not free a large number of prisoners, certainly not in return for soldiers’ bodies. Although this was not spelled out, Israel does not see the release of a living Israeli soldier (Shalit) as akin to the freeing of soldiers’ remains. “We cannot afford to repeat the same mistake,” Liberman said in 2017, referring to the Shalit deal.

The Israeli position calls for returning the remains of terrorists it is holding and the Hamas militants it captured in the 2014 war with Gaza in exchange for the bodies of Israel Defense Forces soldiers, and returning sick Palestinian inmates or Palestinians who crossed the border in return for the Israelis being held by Hamas, reportedly people with mental disabilities.

Sinwar probably knows the Israeli leadership will not compromise on the prisoner issue, definitely not when such a deal could be perceived as a despicable trade in bodies. Mladenov and other intermediaries told Hamas as much when they conveyed Israeli messages to Gaza. Sinwar, however, is adamant. He has staked out a stubborn position and refuses to give in, although he probably realizes he doesn’t stand a chance of getting what he wants.

Sinwar amassed political power when he placed the prisoner issue as his top priority. He probably fears losing this political base, as well as the admiration of the prisoners in Israeli jails who are trusting him to get them out and the support of their families in Gaza and the West Bank. With this political consideration in mind, he is willing to sacrifice 2 million Gaza Palestinians yearning for a better life.