A shortage of drinking water in southwest Iran has resulted in protests and conspiracy theories. 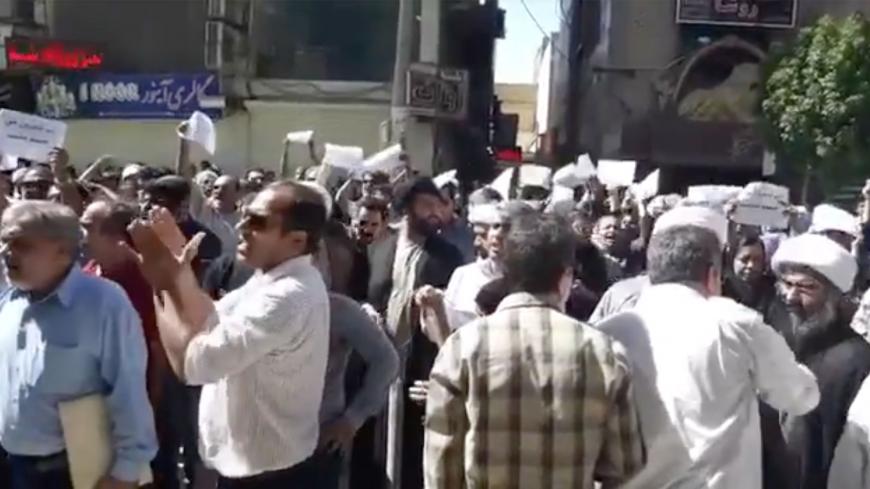 People gather to protest the quality of drinking water in Abadan, Iran, in a still from a video recorded June 20, 2018. - YouTube/ eykeiran

Iran’s southwest region has experienced a shortage of drinking water in the last few days. Residents of the Khuzestan province, particularly in the cities of Khorramshahr and Abadan, have staged protests, with some protests turning violent.

Video clips of clashes between protesters and police were shared online. Deputy Interior Minister Hossein Zolfaghari said that as a result of the clashes in Khorramshahr, 10 police officers and one protester were injured. Contrary to claims on social media, Zolfaghari said there were no deaths.

According to Zolfaghari, one of the protesters was armed, but has not yet been identified. He said the original protesters dispersed once the Khuzestan governor addressed them, but approximately 100 individuals remained and destroyed and set fire to property, which resulted in clashes with the police and the use of tear gas.

Zolfaghari said that two dozen tankers containing water have been sent to the city, and the issue, which was caused by damaged pipes, would be resolved by July 6.

Interior Minister Abdolreza Rahmani Fazli said the plan to send drinking water to Khorramshahr has been a decadeslong project and the latest pipeline delivering water was to be unveiled shortly. He said the Islamic Revolutionary Guard Corps’ engineering firm Khatam al-Anbia is currently working on the project. He also stressed the need to allow legal protests in designated locations in order to prevent destruction or violence from spilling into to the streets.

Gholam Reza Sharafi, a parliamentarian from Abadan, said that he had been warning officials for a year and a half about potential water shortages. He also addressed rumors that Iran has been transferring its drinking water to neighboring Iraq and Kuwait, saying, “10, 15 years ago, there were discussions that if we have excess water we could export it, but nothing ever went into operation.”

Ali Sari, a member of Iran’s Expediency Council representing Khuzestan province, also denied the rumors that Iran is transferring drinking water to neighboring countries in the Persian Gulf. “Our neighboring countries use desalination and have no problems,” Sari said. “But unfortunately, this issue was ignored in our country, and we continuously pursued the transferring of water.” He added that the transferring of water from one area to another requires proper filtration and this, too, has caused problems, which resulted in water shortages and the protests.

According to a report by Mehr News, the water crisis in southwest Iran was due to broken pipelines and malfunctioning filtration. A number of news agencies have shown the repairs being done on the pipes. Local clerics, taking advantage of the photo opportunity, have also joined the workers on the repairs.

The crisis has also brought about comical conspiracies. Brig. Gen. Gholam Reza Jalali, the head of Iran’s Passive Defense Organization, accused a team of Israelis, working with a neighboring country (likely a reference to Saudi Arabia), of working to keep clouds from entering Iran.