Khamenei: Iran must expand ties with East as well as West

In a meeting with members of the Cabinet, Ayatollah Ali Khamenei emphasized the need for Iran to expand ties with both Eastern and Western nations. 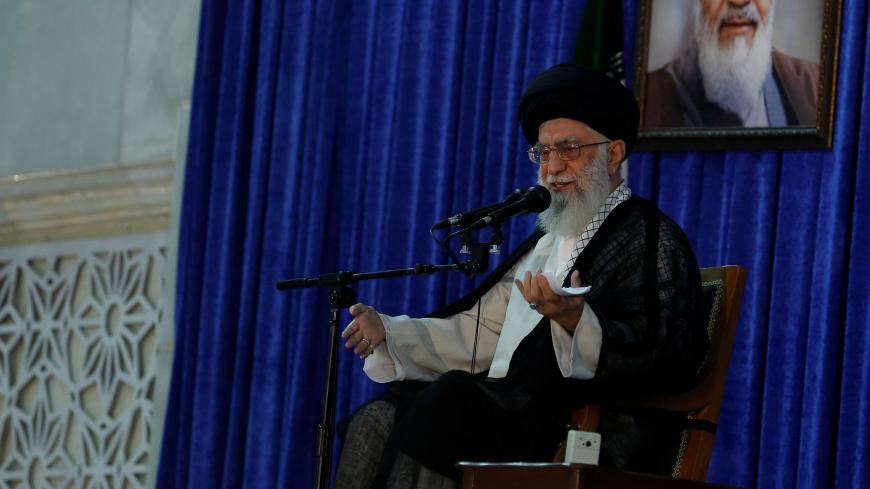 Iranian Supreme Leader Ayatollah Ali Khamenei delivers a speech during a ceremony commemorating the death of the founder of the Islamic Republic, Ayatollah Ruhollah Khomeini, in Tehran, June 4, 2017. - TIMA via REUTERS

Iranian Supreme Leader Ayatollah Ali Khamenei has rebuked those advocating that Iran look only to the East in response to the US withdrawal from the nuclear deal. He asserted instead that Iran must expand its ties more broadly.

In a July 15 meeting with members of President Hassan Rouhani's administration, Khamenei said, “With the exception of a few instances, such as America, the country’s relations with East and West must be strengthened, and targeted diplomacy must be increased.”

As a result of the US reneging on the 2015 Joint Comprehensive Plan of Action — signed by the five permanent members of the UN Security Council plus Germany — and the European's inability to stave off US sanctions and protect European business ties with Tehran, a number of Iranian officials have advocated looking eastward, in particular toward Russia and China, to offset the loss of business with Europe. Khamenei’s latest comments on the matter seem to reject that idea, representing a big win for Rouhani, who since the signing of the nuclear deal has sought to expand political and economic relations with Western Europe.

On the issue of expanding ties and diplomacy, Khamenei continued, “Showing strength versus foreigners, particularly America, is necessary and must be timely, direct and firm.” He added, “Of course, the European side is responsible for giving guarantees regarding the nuclear deal, but the issue of the economy of the country must not be tied to this.”

The meeting between Khamenei and Rouhani’s Cabinet members primarily focused on economic matters. He said that if the administration offers a “road map for the economy,” it will inspire stability and calm among entrepreneurs. The supreme leader also stressed the need to fight economic corruption.

To what extent Iran can maintain ties with Europe remains to be seen. On July 16, US Treasury Secretary Steven Mnuchin said that as the United States imposes oil sanctions against Iran, it will offer waivers to certain countries, although, he remarked, the US goal is still that other countries reduce oil imports from Iran to zero. Oil exports were only one aspect of the Rouhani administration’s economic policy; another major element of it — investment from giant European firms —has not materialized and now looks even more unlikely.

US President Donald Trump, who made the decision to exit the nuclear deal, met today in Helsinki with Russian President Vladimir Putin to discuss a number of issues concerning their two countries. In Tehran, in response to a question about Trump’s comments at this month's NATO summit in Brussels that Iran would eventually contact the United States and negotiate, Iranian Foreign Ministry spokesman Bahram Ghassemi said, “Trump’s behavior toward Iran is hostile. This hostile behavior can be seen in various ways.”

Ghassemi added, “Maybe he was joking, and it’s possible one day he calls Tehran and requests negotiations. This scenario is more likely, and there are signs of this from the past.” Ghassemi was likely referring to reports that Trump had requested a one-on-one meeting with Rouhani at the September 2017 convening of the UN General Assembly.