Despite campaign stumbles, Erdogan still ahead of pack

For the first time ever, President Recep Tayyip Erdogan and his party seem lost on the campaign trail, but unpopularity doesn't necessarily spell failure in Turkey's elections. 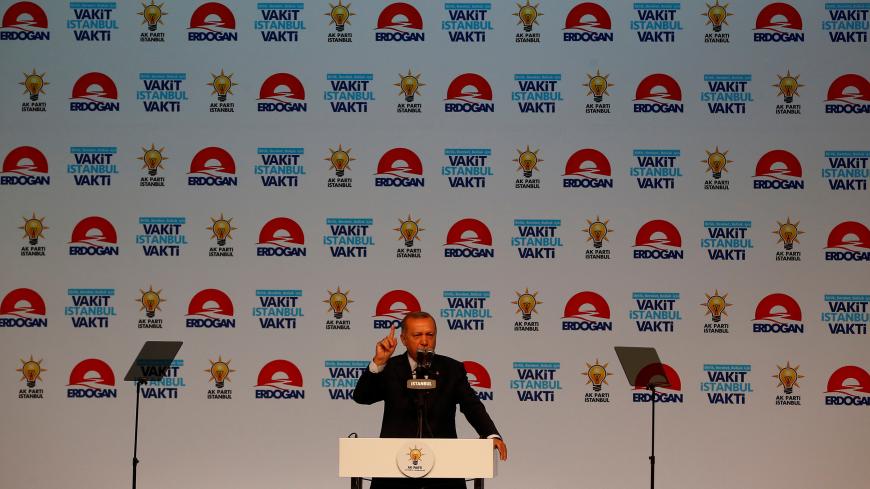 Turkish President Recep Tayyip Erdogan has been active in politics since the early 1990s, when he first campaigned for election as Istanbul’s mayor. Friends and foes alike agree he is a skilled orator. Erdogan thrives on public speaking and rallies. For 25 years, cheering crowds have mirrored his passion and dedication. Yet the 2018 election campaign is different. The AKP is confident of its base, but signs are emerging that the spell might be broken.

Erdogan and other senior AKP members have been finding it difficult to connect with the average voter. To add insult to injury, the opposition — more united than ever before — is having a field day both over social media and in public rallies, ridiculing angry government officials. In a way, this election has become a battle between bitterness and laughter as opposition members creatively satirize Erdogan and the rest of the AKP's comments. The latest interviews indicate Erdogan is eager to reach the end of this distressing election process.

Here are a few recent examples:

The Turkish Constitution lists a college degree as a prerequisite for the presidency, so Erdogan’s lack of one has been a major concern. Muharrem Ince, the candidate of the main opposition Republican People’s Party (CHP), launched his political campaign by distributing copies of his degree along with comments by his classmates and professors. He then demanded to see Erdogan’s diploma. To counter these claims, a pro-government journalist went on television and claimed that followers of the exiled cleric Fethullah Gulen stole and destroyed Erdogan’s diploma. Sharp-tongued Ince brought up the issue again at his rally in Sanliurfa June 6, joking, “Well, Gulen members replied to that: ‘We were going to destroy it all right, but we could not find it.’”

Another unusual issue on the campaign trail is the shrinking audiences for Erdogan and his party. The first sign was at a joint rally for the AKP and the Nationalist Movement Party, which formed an alliance to endorse Erdogan for president. The May 18 rally in the Yenikapi district of Istanbul was held to oppose the US decision to move its embassy to Jerusalem. The event was widely publicized and free transportation was made available from all around Istanbul and neighboring cities. Despite those efforts, the field was not full. Since then, footage of several other scantily attended rallies has been shared over social media amid reports that government employees have been compelled to attend AKP rallies. Although this information cannot be independently verified, there are recordings of scores of people leaving the rallies as the speeches continue and pictures of rather bare fields even in staunchly pro-AKP cities.

Erdogan has refused to participate in a presidential debate, so each candidate appears on TV alone. A few independent media outlets reported on May 31 that Ince’s ratings have surpassed Erdogan's, but the next day pro-government dailies denied this claim. On June 6, independent newspapers claimed support for Ince has passed Erdogan's on social media for the first time.

Erdogan has also suffered some serious publicity mishaps. At a Diyarbakir rally, he paused for an awkwardly long time. The opposition was convinced he stopped because of technical issues with his teleprompter and until it was solved, Erdogan was left tongue-tied. The jailed leader of the pro-Kurdish People's Democratic Party, Selahattin Demirtas, referred to Erdogan as “prompter veteran” while Ince renewed his challenge to “come with your teleprompter to debate with me live on TV,” joking that the teleprompter is his most important rival. Erdogan and his team tried to repair the damage by claiming the pause was intentional.

But an image of Erdogan as absentminded, defensive and lacking control is emerging amid the jokes. For instance, on June 8 Erdogan claimed he had had to study in a classroom of 75 students during elementary school because Ince’s party was in power at the time. But the CHP government had ended long before Erdogan’s birth in 1954, making Erdogan’s claim impossible. There have been several such statements throughout the campaign, with Erdogan claiming to have established colleges or built airports that were completed long before Erdogan’s time.

Al-Monitor consulted scholars from communications and medical fields about why the AKP and Erdogan are struggling despite their experience and lavish resources. Their answers ranged from the difficulty of getting people to rallies during the month of Ramadan and that Erdogan has lost his best campaign managers and speechwriters in the last two years. Yet the most emphasized reason was that Erdogan is exhausted and no longer has a narrative to excite the crowds. Unsal Unlu, a seasoned journalist whose daily reporting rivals that of most mainstream television networks, agrees that for the first time, the rallies are not going well for the AKP. Looking at the challenges Erdogan is facing in public, Kemal Can, a scholar and columnist for Cumhuriyet, wrote that either Erdogan has serious teleprompter problems or he has lost touch with reality.

Another important factor is the lack of youth participation. Bekir Agirdir, director of the KONDA polling agency, reported that out of 57 million voters in Turkey, about 19 million are younger than 32. In that group, half of them are politically unaffiliated. They represent about 10 million young people who may have lost interest in politics.

Erdogan’s campaign ads also reveal that there is not much to brag about on the AKP’s list of achievements. The ads focus on either Ottoman-era glory or nostalgia for the late 1980s and 1990s.

Still, Erdogan has not given up and is trying to connect with the population with some basic facts. At a June 5 rally in Sakarya, Erdogan dismissed claims about economic difficulties, arguing that the refrigerator sales paint a prettier economic picture. Ince and hundreds of others on social media refuted this claim, saying the fridges are empty and ridiculing the suggestion that ownership of the gadget is a measure of development in this day and age.

Erdogan then announced that he had big news to share. On June 7 at Hatay province, he revealed one of his big surprises: free “popular coffee shops” that will be open 24 hours. He said young people will be able to go there and read books while sipping tea and coffee and eating cake. In a country with high youth unemployment, Erdogan promised to keep the young fed with cake and tea instead of creating job opportunities. Ince demanded in response that factories, not free coffee houses, should be a priority.

Ince, who holds a degree in physics, has been announcing high-tech projects that he claims will be cost-efficient and mocks Erdogan’s groundbreaking plans. On June 8, Erdogan was quoted as saying, “God willing, customers of city hospitals will increase,” and suggesting prior to the AKP government that dogs were pulling ambulances. None of this rhetoric sat well with sober audiences, and another round of social media ridicule started about how primitive Turkey was before Erdogan.

For the first time ever, Erdogan and his party are stumbling on the campaign trail. Yet election results still depend on the electoral institutions, so despite all his setbacks, Erdogan still remains the top contender.