Russia faces the conundrum of figuratively finding common ground between Iran and Israel in Syria while literally keeping distance between them. 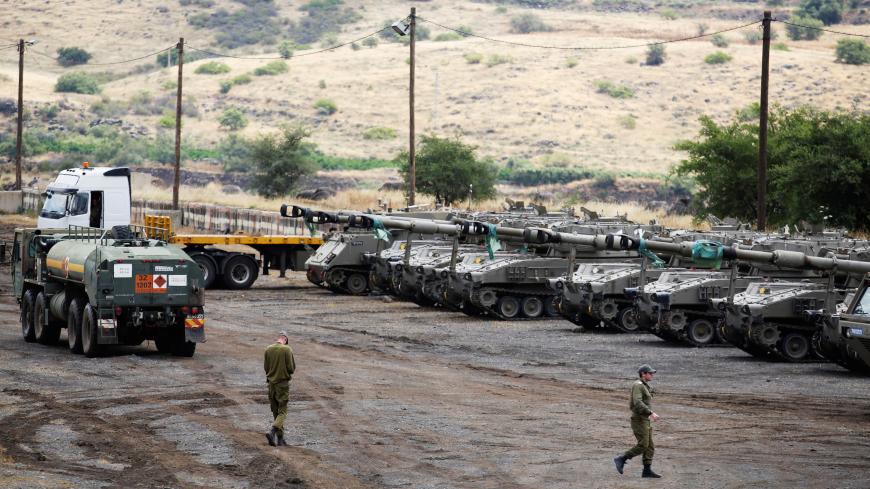 Israeli soldiers walk near mobile artillery units in the Israeli-occupied Golan Heights, May 9, 2018. Tensions on Israel's northern border with Syria have heated up as Israel objects to the presence of Iranian forces in southern Syria. - REUTERS/Amir Cohen

MOSCOW — Russian and Israeli officials met this week in Moscow to discuss Israel’s concerns over the extent of Iran’s current and future presence in Syria.

Israeli Defense Minister Avigdor Liberman and other top Israeli officials met May 31 with Russian Defense Minister Sergei Shoigu. The primary focus of the visit was the situation in Syria and specifically, in Liberman’s words, “the entrenchment of Iran and its proxies” there.

Since the May 17 meeting between Russian President Vladimir Putin and Syrian President Bashar al-Assad when Putin mentioned the potential for a quick withdrawal of foreign forces from Syria, high-level Russian officials have reiterated this argument on numerous occasions, with some directly pointing to pro-Iranian forces. This ignited speculation over Russia’s apparent change in mood regarding Iran.

The frequent contact between the Russians and Israelis in recent weeks further triggered rumors of a “secret Russian-Israeli deal” to push pro-Iranian militias from southern Syria. Paradoxically, these claims are often accompanied by a recognition of Russia’s virtual inability to accomplish that.

The Shoigu-Liberman encounter indeed came amid a flurry of talks among Russia, the United States, Israel and Jordan on the future of the southwestern de-escalation zone in Syria. Anyone watching this scene unfold from Tehran might easily get the impression that Russia has sold out Iran to Israel and the United States. However, one should be careful to read between the lines in Moscow’s statements and, most importantly, to study its actions.

Shoigu started the meeting with Liberman, which lasted a little more than an hour and a half, by praising Damascus’ recent successes: “The environment in the areas controlled now by the Syrian authorities is being improved to receive refugees and establish life in peace.”

Assad has sought to launch an offensive against opposition forces in Daraa province, but recently Israel and the United States objected, in large part over concerns about the presence of Iranian and allied Shiite militia in the area. Moscow is working to resolve the issue, first by trying to convince the Israelis of Assad’s need for that offensive (similar talks with the Americans are expected soon) and, second, by negotiating terms of the potential departure of the pro-Iranian forces.

Both themes are closely linked: Israel discourages the Daraa operation, given the leverage Israel has in the area over Syrian security, and given its fear of losing that leverage should pro-Iranian militias and Hezbollah win the territory from the opposition. If, however, there are guarantees that Iran won’t have a military presence in southern Syria or participate in any military operation by the Syrian army there, Israel might not impede the offensive.

Al-Monitor reported earlier that Iranian Ambassador to Jordan Mojtaba Ferdosipour had stated Iran’s support for the de-escalation. Meanwhile, Hezbollah’s sources told Russian media that, should the Syrian government accept “a potential Russian request” to exclude Hezbollah and other Shiite militias from the Daraa offensive, Hezbollah leadership may also agree to leave.

In this case, an alternative solution to this dilemma discussed with and seemingly accepted by both Israel and Hezbollah is to deploy Russian military police in the area. This could be a suitable fix, at least temporarily. Yet a lot depends on which conditions are going to be implemented. There’s a “peaceful scenario” in which the police would be deployed in exchange for the opposition laying down arms and surrendering the area to government forces. But there’s also a “forceful scenario” where the Russian military police would deploy after the Syrian army retakes control of the territory by force. Moscow has a big problem with the latter scenario’s potential to complicate Russia’s mediation efforts. The Syrian army could get stuck in the fighting on its own, with no Hezbollah or Iranian militias. Or the offensive could entail massive civilian casualties. Russia thus insists on the “peaceful scenario” as an important element for de-confliction to succeed.

Israel’s Channel 1 television reported that in a May 30 phone call, Putin and Israeli Prime Minister Benjamin Netanyahu discussed the possibility of keeping Iran and its allies 70-80 kilometers (40-50 miles) from the Syria-Israel border.

Tehran views Moscow’s moves with frustration, if not anger. However, they have long had different interests and policies regarding Syria. It’s understandable that these feelings are being exacerbated as Moscow engages in talks with Iran’s archrivals, because the deep-seated, historic mistrust has never evaporated. Yet Russia’s contacts with Israel do not mean that Moscow has made a U-turn in its attitude toward its critical partner in Syria: Russia’s military recognizes the role of Iran, and Hezbollah, in the Syrian war and appreciates the potential results of a joint effort.

Speaking at the Primakov Readings — a high-level, international policy conference held May 30 in Moscow — Lavrov recognized that Russia’s interests “don’t coincide 100%” with regional powers, including Iran and Israel, but stressed, “It’s [Russia’s] principle to talk to everyone without exception, especially when there are contradictions in the assessments. We disagree with assessments based on the thesis that Iran is the root of all problems in the region — in Syria, Palestine, Lebanon, in Iraq. … When we look at the regional situation with our Israeli colleagues and we outline our approach, we stress a need to engage all parties in negotiations, instead of seeking to isolate them.”

Lavrov even emphasized a resemblance in the way the United States approaches Iran and Russia: “They [the United States] say Iran has to change its behavior in the region. It’s the same thing they are telling us to do — change our own behavior everywhere before they start speaking to us normally.”

Hence, Russia, as a self-appointed but seemingly mutually accepted middleman between Israel and Iran, is engaging in talks with both sides, seeking the least painful option for both, but one that includes reasonable security concessions. If the adversaries are serious about letting Moscow mediate, they should cooperate with Russia, rather than being jealous of its contacts with both.

For this reason, Moscow doesn’t see its interaction with Israel as a “deal” in a strict sense of the word. They’re not negotiating behind Assad’s back. Both Hezbollah and the Iranians continue to be informed and consulted, and in this particular case, Russia isn’t trading Iranian interests for its own benefit. The bottom line here is Russia can’t force Iran out of southern Syria — that can only be done through talks with Tehran and Tehran’s voluntary participation, with clear incentives from Russia and, indirectly, Israel.

Despite all the complexities, the situation in southern Syria doesn’t look hopeless at this point. A far bigger challenge in this conundrum is Iran’s long-term presence in the rest of Syria. There’s an understanding in Moscow that Hezbollah may always find a reason to stay in Syria as long as its leadership feels it needs to ensure Lebanon’s security. There’s no way for Russia or any other external power to guarantee an Iran-free Syria, as there are no means of verifying Iran’s presence or its influence.

No matter how successful Israel is in destroying Iran’s military infrastructure in Syria, the back-and-forth missile strikes could turn smoldering confrontations into another regional war.

Russia seems humble in what it believes it can achieve in keeping Iran and Israel apart in the rest of Syria. Moscow sees political and geographic limits to its mediation role. Pondering this issue, a senior Russian diplomat told Al-Monitor, “Our expectations are modest. If they [Israel and Iran] really want to be at each other’s throats, there's little we can do to stop them. But we are proceeding on the premise that this isn’t what they want, and that they will embrace what we’re offering.”