Palestinian journalist associations and rights organizations condemned the Palestinian security forces’ handling of reporters covering the protests that took place in Ramallah in support of the Gaza Strip. 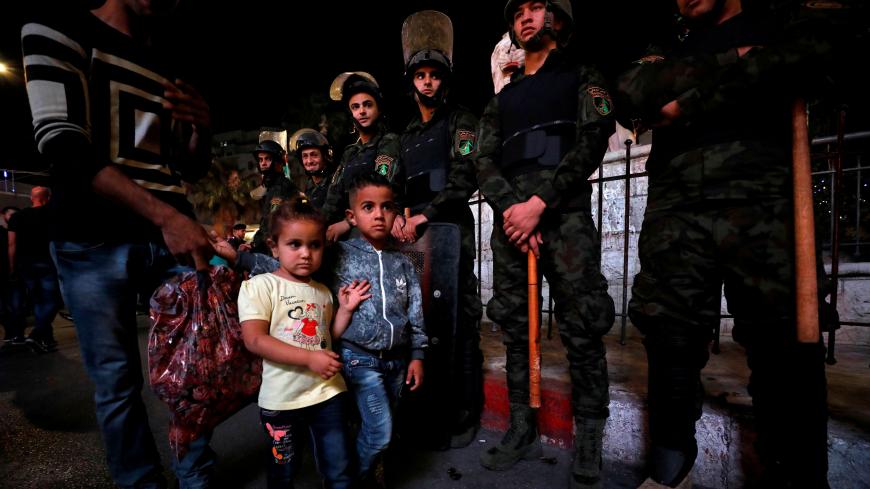 Local and international media organizations have criticized the Palestinian security forces for their role in an attack on journalists during a June 13 demonstration in Ramallah.

The demonstrators, who were calling for the reinstatement of salaries to Gaza's public servants, were brutally attacked by plainclothes officers. The Palestinian Center for Development and Media Freedoms (MADA), a Palestinian media watchdog, reported June 14 that at least 17 Palestinian and foreign journalists were among those attacked and prevented from filming the protests in Ramallah.

Heba Erekat, a female reporter with Shasha News, was attacked by 10 undercover security officials who pushed her to the ground, kicked her and attempted to take away her cellphone even though she told them she was a journalist and a member of the Palestinian Journalists Syndicate, MADA reported.

MADA and various media outlets published a number of other testimonials, though no credible source was able to certify whether President Mahmoud Abbas was directly behind the attempts to muzzle protesters.

The Palestinian Journalists Syndicate (PJS) issued a statement June 13 calling on its members not to publish any official Palestinian government news as a response to the violation of the journalists’ right to work.

Naser Abu Baker, the head of the PJS, told Al-Monitor that the decision to boycott the Palestinian government is being largely implemented. “It is hard to gauge the effectiveness of the boycott because we had a holiday [Eid al-Fitr] and there has been no news coming out of the government.”

The New York-based Committee to Protect Journalists (CPJ) issued a detailed statement June 15 condemning the attack on members of the press by the Palestinian security. “This is not the first time that security forces have used violence and intimidation to prevent coverage of protests that the authorities may dislike,” said CPJ Deputy Executive Director Robert Mahoney. “The Palestinian Authority must deal firmly with all those who assault journalists to send a clear message that it is committed to press freedom.”

CPJ quoted Seth Herald, an American freelance photojournalist who was covering the protests for the independent Israeli news magazine +972, saying, “A police officer ordered him to stop taking photos of an injured protester and tried to grab his camera.”

Herald told CPJ that “several plainclothes officers beat him with batons and their fists, kicked him, and one of them twisted his arm and grabbed his camera.” Herald “was dragged to a police van, where he was detained for about an hour, before being taken to a military barracks where he was held for two hours,” the CPJ statement noted.

The Brussels-based International Federation of Journalists (IFJ) issued a statement June 14 supporting its affiliate member, the PJS, and called for an investigation into the incidents. IFJ General Secretary Anthony Bellanger stated, “We are deeply concerned about such attacks targeting both local and foreign journalists and call on the government to respect Palestine’s commitment to protecting media freedom. There must be a full investigation and action taken against those responsible.”

The Foreign Press Association (FPA) in Israel also chimed in, calling the behavior “completely unacceptable.” The FPA said that covering peaceful demonstrations “is one of the most basic jobs of the media and journalists should be able to do so without fear of attack or censorship.” The FPA joined other local and international organizations in urging “the Palestinian Authority to investigate this incident and to apologize.”

Unlike previous attacks on the press, the Palestinian leadership was totally silent. A senior Fatah source told Al-Monitor that the incident has caused major embarrassment and that the leadership is unhinged and doesn't know what to do.

Abu Baker told Al-Monitor that the PJS will escalate its protests until it is certain “that the action is apologized for and that a serious investigation will take place followed by actions that will ensure it doesn’t occur again.”

A similar incident in Gaza’s Saraya Park against demonstrators and journalists June 18 by the Hamas-controlled security forces produced similar, although less publicized reactions. The PJS issued another strong statement on June 19 calling on its members to boycott news of what it called the “Hamas gang.”

The retraction of basic rights in Palestine, as exemplified by the recurring attacks on journalists both in the West Bank and Gaza, reflects a general sense of desperation and lack of confidence by both the PLO-run West Bank and the Hamas-run Gaza Strip.

It is not clear if boycotting all the news will matter much to either power. Journalists have a responsibility to inform the public, and boycotting news — even if it is news on the Palestinian government in Ramallah or Hamas in Gaza — will punish the public at large. A more serious united effort is needed to deal with the problem of the denial of basic freedoms guaranteed in the Palestinian Basic Law.