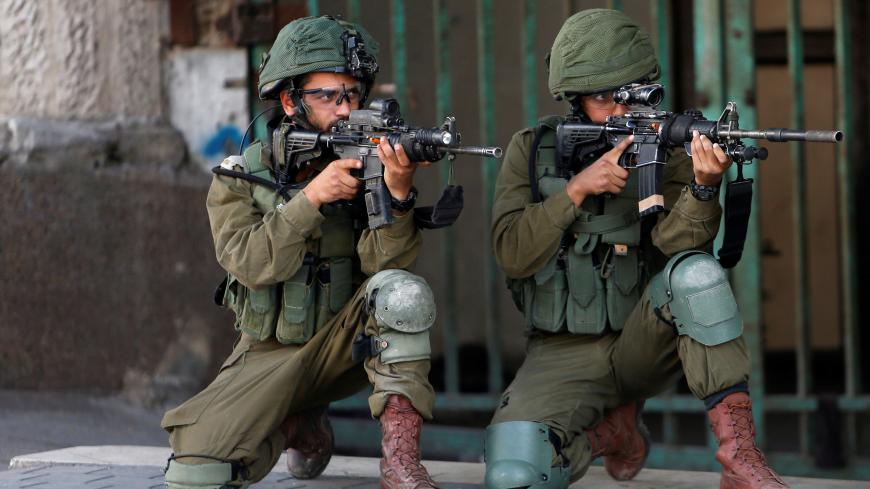 Israeli soldiers aim their weapons during a protest by Palestinians ahead of the 70th anniversary of Nakba, Hebron, West Bank, May 11, 2018. - REUTERS/Mussa Qawasma

The latest outline for conscription of ultra-Orthodox Israelis, presented by Defense Minister Avigdor Liberman, has reignited debate on the issue. Many voices in Israel have called over the past few years for “equal sharing of the burden,’’ meaning for ultra-Orthodox youth to serve like everybody else.

But while politicians are divided over the existing law and compromise proposals, Knesset members from four disparate parties have joined forces to promote legislation ending military conscription altogether. Knesset member Menachem Moses of the ultra-Orthodox Yahadut HaTorah party and his coalition partner from the Likud, Yehuda Glick, have joined forces with secular leftists Mossi Raz and Issawi Frej from Meretz and Dov Khenin from Arab-Jewish Hadash to end the country’s compulsory military service. Explaining their proposed bill, the lawmakers argue that the idea is an anachronism ill-suited to contemporary Israeli society.

Can the State of Israel, with its array of security challenges, afford to shrink its standing army? According to the bill's explanatory notes, over a third of those required by law to enlist already do not do so, compared with a quarter in 1990. Between 2013 and 2017, the number of soldiers discharged as unsuited to military service has grown 15%. At the same time, combat units are almost full to capacity, and supply exceeds demand in non-combat units.

Raz explained to Al-Monitor this week that according to his model, fewer people would enlist but they would serve longer periods, meaning the soldiers would be older — even parents — more professional and more level-headed. At the same time, straight-A high school students prevented from serving in combat units because of medical issues could make good use of their talents and contribute to the country in the civil sector.

What about the principle of equally sharing the burden of military service espoused by many politicians in recent years? The data provided in the introduction to the bill indicate that those who suffer most from compulsory service are soldiers from disadvantaged families. Three of four soldiers incarcerated in military jails are serving time for going AWOL or deserting to work and help their families financially. Also according to the bill, some 13% of these inmates are Israelis of Ethiopian origin, the poorest demographic group in Israel, even though they make up only 3% of the conscripts and a far lower percentage of the overall population.

According to data from 2009, the current conscription system is a heavy burden on the state coffers at an annual 9 billion shekels ($2.5 billion), or 1.2% of the GDP, due to hidden unemployment in the military and the removal of Israelis aged 18 to 21 from the labor force for two to three years. This money could be allocated to improving the school system and scientific research, important building blocks for the state’s long-term security. The 2017-2018 budget reads, “Army recruits are a very dear resource given that they are a potential part of the work and education force, and the meaning of military service means deferring the realization of this potential.” At the age of 18, while young people in the West are joining the labor force or acquiring an education, their Israeli counterparts go into an employment freeze. Few regular soldiers, barring technicians and computer programmers, acquire skills during their military service that are relevant to the civilian market.

Raz is unfazed by assessments that if the draft is ended, the number of secular and leftist soldiers would shrink and the army would be comprised largely of recruits from religious, right-wing backgrounds. “This is the case today already,” he said. “Half the graduates of officers’ training and 40% of the brigade commanders belong to the Zionist religious stream, and that rate keeps growing. I actually think that revoking compulsory service and making military service voluntary would open up the Israel Defense Forces to new population groups and balance them out. For example, many Arab-Israelis join the police because it is not compulsory.”

A comprehensive survey conducted in 2016 among hundreds of non-ultra-Orthodox youths between 15 and 18 suggests that doing away with compulsory recruitment would scarcely affect the rate of enlistment: Only 26% of those surveyed said they would not enlist if service were not mandatory, compared with the third who do not serve today.

In February 2006, a “revolution” was announced: Male soldiers were to serve two instead of three years by 2010. Defense Minister Shaul Mofaz and Chief of Staff Lt. Gen. Dan Halutz announced at a joint news conference that combat soldiers and those with special skills would serve two years and four months and get a significant stipend. The promise did not materialize. In 2014, the military’s Center for Behavioral Science recommended preparing for changes in the recruitment model and ending compulsory enlistment. A wide-ranging study conducted by Yuval Benziman for the Center for Behavioral Science noted that over the past few decades, many countries had done away with the draft, and military service is only mandatory in six European states and several countries in Asia and Africa.

Despite the strength of its supporters' arguments, the multi-party bill repealing conscription could end up in the Knesset archives. Even though the IDF is considered the strongest army in the region, and even though whole brigades are serving in the West Bank protecting the settlers outside the boundaries of Israel, Israel’s military still enjoys the status of David protecting his people against Goliath.

The military’s education corps teaches 18-year-old men and women soldiers that guarding illegal settlements in the occupied West Bank is defense of the state. Lecturers sent by the army’s rabbinate and Chabad proselytizers are invited to speak at army bases and tell recruits that they were fortunate to have taken part in a God-sanctioned “mitzvah” war. On the other hand, activists of the anti-occupation Breaking the Silence organization, IDF veterans who expose the injustice of the occupation they experienced during their military service, are banned from army facilities.

Raz and Khenin should bear in mind that many youngsters who believe that the IDF must be not only strong but also moral would hesitate to volunteer, reluctant to spend three years managing the West Bank occupation or the Gaza siege.

Raz and Glick are organizing an open debate on the proposal and the draft at the Knesset June 25.