As the Iraqi Cabinet and parliament investigate allegations of widespread fraud in the recent election, the winning parties await the potential fallout, worried about losing parliament seats. 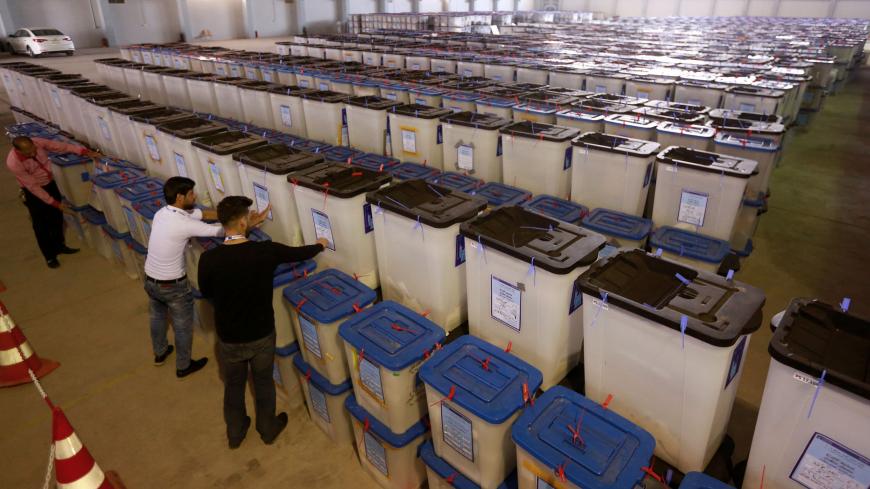 Employees of the Iraqi Independent High Electoral Commission inspect ballot boxes at a warehouse in Najaf, Iraq, May 15, 2018. - REUTERS/Alaa al-Marjani

Just hours after Iraq's parliament called June 6 for a partial recount of votes from the May election — where the bloc of Shiite cleric Muqtada al-Sadr won a plurality — a massive explosion rocked the section of Baghdad that bears his family's name, Sadr City. At least 18 people were reported killed and dozens were wounded.

Some initial reports said the explosion was the result of a truck bomb, but Prime Minister Haider al-Abadi later said a weapons cache stored in a mosque by "unauthorized parties" had detonated. The cause is still being investigated.

The Iraqi parliament, in the presence of 172 out of 329 members, had passed an amendment to the country's election law that allows for a manual recount across the country and authorizes a committee to investigate possible election fraud. Parliament also suspended the work of the electoral commission leaders. A panel of nine judges will supervise the commission's work until the parliamentary election results are ratified. The Iraqi Supreme Judicial Council on June 7 approved implementation of the amendment.

The council will hold a meeting June 10 to name the judges who will be assigned to carry out the recount and assess the alleged fraud. Supreme Judicial Council spokesman Abdul-Sattar Bayrakdar stressed that the judiciary will perform its mission honestly and impartially.

The election commission said it will appeal parliament's amendment to the election law, on the grounds it is unconstitutional. But Abadi on June 5 had already banned travel by election commission officers holding ranks of adjutant general and above unless approved by the Cabinet. He criticized what he said were “grave breaches” in the election. At a press conference, Abadi said arrest warrants might be issued for several people from the commission whom he accused of manipulating election results. He did not mention any specific names.

There have been media reports that electoral commission chairman Maan al-Hitawi tried to leave the country, but he denied those claims, denouncing them as rumors meant to harm the commission's image.

The judges have their task cut out for them. At least 5% of the votes cast in all polling stations must be recounted in the presence of the political parties’ representatives. Officials will nullify votes from abroad and the ballots of the displaced. They will also cancel votes from Iraqi Kurdistan, where opposition parties (primarily the Movement for Change, and the Alliance for Democracy and Justice) claim the two main parties — the Kurdistan Democratic Party (KDP) and the Patriotic Union of Kurdistan (PUK) — carried out large-scale fraud in a special vote for the security and military staff.

Minorities in Iraqi Kurdistan also claim there was widespread election fraud against them. Parliamentarian Haji Kendour al-Sheikh, who represents Yazidis, accused the KDP of stealing Yazidi votes and objected to the cancellation of 84,000 Yazidi votes in 192 polling stations.

“The recent parliamentary elections have seen fraud and clear thefts of the votes of Yazidis, especially in the refugee camps,” Sheikh said.

Not surprisingly, the blocs that did the best in the election aren't comfortable with the recount decision, which could reduce the number of the seats they won. Hadi al-Amiri, head of the Fatah Alliance, which won the second-largest number of parliament seats, stressed that the “judiciary is the only competent authority to settle the problem of the elections.” This means implicitly it is not the prerogative of the Cabinet or parliament to make such decisions.

The coalition of Kurdish blocs, which included the two main parties in the region, also expressed regret over parliament’s decision, considering it an attempt by the losing parties to turn the tables on their rivals.

In a nutshell, Iraqi political parties are divided into two main camps. The blocs that did the best, including Sadr's Sairoun bloc, Fatah and the Kurdistan Alliance, support the election results and object to any scrutiny of the votes. In contrast, Nour al-Maliki’s State of Law coalition, the National Alliance of Iyad Alawi and other Sunni blocs favor the recount in hopes of gaining more seats in parliament.

It is unclear how the recount will affect the distribution of parliament seats.

Ali al-Fariji, a leader of the State of Law coalition, said, “According to our available data, about 12 to 21 candidates could vacate their [pending] parliamentary seats.”

But it could be that there will be no significant change.