While revelations by Prime Minister Benjamin Netanyahu on the Iranian nuclear program exposed Tehran's lies about past efforts to reach nuclear capacity, they also revealed involuntarily that Iran has obeyed the 2015 accord. 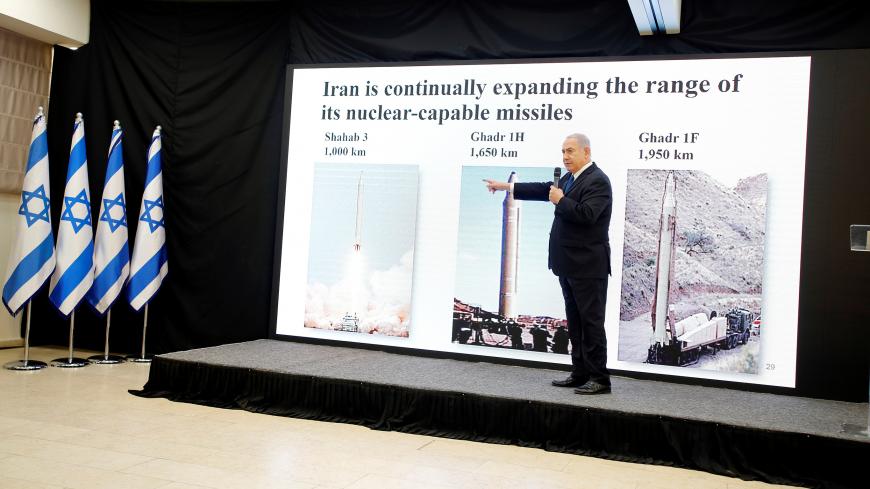 On April 30, Israeli Prime Minister Benjamin Netanyahu proved to the world that the Iranians had not told the truth about their nuclear weapons development when they signed the 2015 agreement with world powers on curbing the program. However, at the same time, his presentation also proved that since the signing, inspectors of the International Atomic Energy Agency had been right in reporting that the Iranians were implementing the agreement to the letter. If such a precise operation by Israel’s Mossad spy agency did not detect any sign of continued efforts to develop nuclear weapons, those claiming that Iran is adhering to its commitment would appear to be right. Netanyahu’s professional presentation cannot justify a US abrogation of its international commitment, with all it implies.

Exposing the incredible Mossad operation, which located Iran’s nuclear archives and moved a half-ton of files and CDs from a storage facility to Tel Aviv, contributed to the credibility of the claims Netanyahu made in his presentation. However, it did not justify exposing Israel’s direct involvement in thwarting Iran’s nuclear weapons program, after so many years of refusing to admit to such activity. The exposure — claimed a former very senior Mossad official who spoke to Al-Monitor on condition of anonymity — could exact a steep price from the agency, both because the Iranians would seek to quickly plug the leak and because it could endanger operatives and operational procedures.

According to media reports following Netanyahu’s presentation, the scenario likely went as follows: Netanyahu wanted to prove that Iran was continuing to develop nuclear weapons despite the 2015 Joint Comprehensive Plan of Action that bans such activity on its part. He asked the Mossad to try to obtain proof. The Mossad made a tremendous effort and arrived at the Iranian nuclear archive, took out loads of material and found evidence that the Iranians, contrary to what they had told the world, had indeed developed nuclear weapons prior to signing the pact.

Netanyahu shared the information obtained by the Mossad with various foreign entities, chief among them US President Donald Trump. The president himself is inclined to announce on the May 12 deadline that he is pulling his country out of the agreement, to the dismay of all the other signatories, some of his advisers and many in Congress (including Republican lawmakers in the Senate and House). Trump was pleased with the Israeli intelligence material and insisted that it be made public prior to the deadline for his decision in order to prove the weakness of the deal.

Not only that, the timing of Netanyahu’s show points to a dialogue between the two countries. Netanyahu likely tried to persuade Trump that a full and dramatic disclosure of the material could hamper future Mossad activity, because Iran would immediately understand that it has holes that must be plugged, and because sources on which Israel based its operation to obtain the documents could be compromised. Trump might have said that he fully understands Netanyahu’s concerns, but needs the material.

The prime minister then summoned Mossad chief Yossi Cohen and told him that he has no choice but to accede to Trump’s demand and expose the many binders and CDs that the Mossad had managed to smuggle from Iran. Cohen presumably tried to protect his agency and explain to Netanyahu that such a public display was unprecedented, that it meant making use of sensitive intelligence material for public diplomacy, that it risked crippling the Mossad’s future operations in Iran and it perhaps endangered those who cooperated with the agency. However, he was hard pressed to refuse the prime minister.

Such scenarios play out occasionally between Israel and its closest and most important ally, especially given that the interests of Netanyahu and Trump in this case are very similar. But Netanyahu certainly understands the damage caused by revealing the operation, and he likely also understands that this is akin to the biblical story of Bilam, the prophet sent to curse the Israelites who ended up blessing them. In trying to undermine the nuclear agreement, Israeli intelligence actually bolstered the determination that Iran had not violated it. This yielded two negative results for the prime minister — on the one hand, it exposed the Mossad’s modus operandi and possibly compromised its collaborators, and on the other hand, it bolstered the case of those arguing that Iran is adhering to the agreement.

Netanyahu’s mistake was in exposing an open secret. The Iranians have been claiming for years that they do not intend to develop nuclear weapons, that they themselves were victims of nonconventional weapons (referring to the chemical warfare waged against them in the 1980s by Iraqi President Saddam Hussein) and that such weapons contradict the path of Islam. They also argue that the person who started developing Iran’s nuclear capability was the shah prior to the Islamist revolution in 1979, and he did so with American help in order to develop nuclear energy for peaceful purposes. The truth is that Iran did begin to develop atomic weaponry, initially probably against Saddam and subsequently against everyone else, and tried to cheat the whole world.

The only proven claim regarding the violation of the agreement is that in signing the pact, and contrary to their commitments, the Iranians did not come clean about their strenuous past efforts to develop nuclear arms. However, to paraphrase the Jewish sages, people naturally avoid incriminating themselves.

In revealing the Mossad’s findings, Netanyahu provided the signatories to the agreement and their supporters with a strong tailwind. After all, the agreement was signed in the first place because the Iranians were deemed to be sparing with the truth. If former President Barack Obama, or any of his partners to the deal, had thought they were dealing with trustworthy people, whose sole intent was to develop nuclear energy for civilian use, there would not have been any need for this agreement. Netanyahu proved that the signatories had successfully tied the hands of the Iranians in halting these efforts, and the fact that he prepared a nice presentation in which he portrayed the top Iranian leadership as liars, simply underscored his inability to portray them as violators of the agreement.

If the president of the United States faces the world next week and declares that despite Iran’s implementation of the nuclear agreement, the United States was pulling out, he will not be able to rely on the professional and commendable work of the Israeli Mossad, or on Netanyahu’s pretty presentation.