Following attacks in Syria against Iranian targets and Prime Minister Benjamin Netanyahu's "atomic archive" speech, Israeli officials are debating how to react to an anticipated response from Tehran. 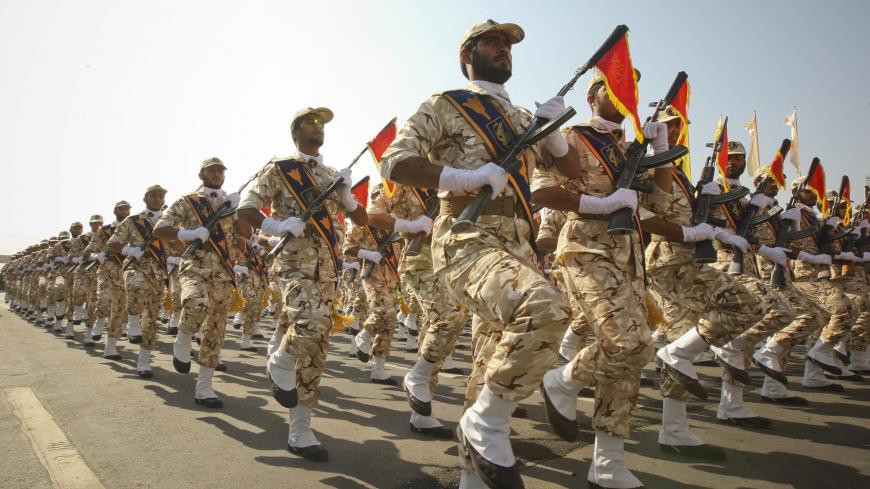 Members of the Iranian Islamic Revolutionary Guard Corps march during a parade to commemorate the anniversary of the Iran-Iraq War, Tehran, Iran, Sept. 22, 2011. - REUTERS/Stringer

It was an especially crazy day, even for the Middle East. On the morning of April 30, Israelis woke up to images of an Iranian target in the middle of Syria that was devastated by an aerial attack overnight. That evening, they watched as their prime minister, in his role as the ideal presenter when it comes to discussing a nuclear Iran, presented them and the world with the Iranian nuclear archives, brought right to the heart of Tel Aviv by Mossad agents operating in the center of Tehran. Prime Minister Benjamin Netanyahu looked like a groom on his wedding day. He had the demeanor of an Apple executive introducing the world to the latest iPhone, not the darkest secrets of Iran’s nuclear program. Ostensibly, it was another productive day for Israel’s leaders and their security forces. In reality, Israel and Iran were still dancing a deadly tango on the mouth of the Middle Eastern volcano. At some point, what started as a slow waltz will turn into a frenzied sword dance.

On the morning of April 30, the aerial attack on a munitions storage site near Aleppo could still be heard echoing across the landscape. The fireballs that ripped across the Syrian sky were still burning when The New York Times reported that 200 ballistic missiles, which Iran had stockpiled in an air base in Syria, were destroyed. According to Western intelligence sources, the missiles were intended to be part of an attack that Iran was planning against Israel, in response to an earlier attack by the Israeli air force (according to foreign news sources) against Syria’s T-4 air base near Homs, which Iran had been using to launch drones.

On May 1, American government sources told NBC that it was Israeli F-15 fighter jets that destroyed the Iranian missiles. Then came Netanyahu’s presentation, which received widespread international attention. In it, he exposed what Israel calls the “Iranian lie” in all its boldfaced nakedness. These two events — the night bombings and the intelligence briefing for the press — are directly related.

The Israel Defense Forces’ (IDF) freedom of action against Iran can also be attributed to the fact that until May 12, when President Donald Trump is scheduled to decide the fate of the Iranian nuclear deal, Tehran has put all its actions on hold. The last thing that Supreme Leader Ayatollah Ali Khamenei and Islamic Revolutionary Guard Corps leader Qasem Soleimani need now is a major war in the Middle East targeting Israel. That is why Israel is allowing itself to tug on the rope and raise the threshold on an almost daily basis.

Previous articles in Al-Monitor revealed that some members of the Israeli Cabinet support moving this war against Iran directly to the territory of Iran itself, after allowing it to simmer on a low burner for such a long time. In other words, if something blows up in Israel, something should blow up in Tehran as well. The purpose would be to ensure that Iran cannot hide behind its various “proxies” in the region, whether Hezbollah, Syrian President Bashar al-Assad or the Shiite militias. As far as is known, this approach has the support of Defense Minister Avigdor Liberman, Education Minister Naftali Bennett and Transportation Minister Yisrael Katz, all of them senior Cabinet members. As one minister told Al-Monitor on condition of anonymity, “Israel must smash the equation, which says that even when it takes a hit in its territory, all will remain quiet in Iran. We have to start making the Iranians pay in their own territory.”

Now that the IDF is bracing for an Iranian response to recent alleged Israeli attacks in Syria (which, it is thought, left dozens of Iranian troops dead), Israel will be forced to decide how exactly it will respond. The intelligence assessment is that Iran will attempt a response that exacts a similar cost and mode of operation to those taken by Israel. In other words, it would attack an Israeli military target and try to take a toll on uniformed troops. If that is the case, will Israel “contain” the Iranian response and react in a measured and tempered way so that the situation doesn’t deteriorate any further? It all depends on the circumstances of the attack. Should Israel respond against Iranian targets in Syria, or should it attack Iran itself? This lies at the base of a significant debate, which has yet to be decided.

Regardless, Israel is not denying that a war against Iran is already well underway. “We cannot allow ourselves to get into a war of choice,” Liberman told the IDF’s general staff in June 2016 during his first meeting with them as defense minister.

Liberman considers a war against Iran to be a classic “war of no choice.” He told Al-Monitor, “We cannot allow Iran to station air defense systems in Syria, which would seal the skies to us all the way to Beersheba. No way. That’s not going to happen. We consider this to be a red line, and it leaves us without a choice. It is true that Israel prefers peace and quiet. Our economy is thriving, and the country is flourishing, but we will stand vigilant on this red line. We will not let it happen, no matter how much it costs.”

When asked whether Israel has coordinated this policy with the Russians and President Vladimir Putin, Liberman answered, “The Russians understand our interests, and we understand their interests. We have no desire to hurt anyone, but at the same time, we cannot allow Iran to shut down our airspace. Everybody understands that.”

The Mossad’s enormous achievement in successfully pilfering Iran’s nuclear archives and transferring them from Iran to Tel Aviv was like a blast of wind in Israel’s sails, even if Jerusalem is well aware that the archive did not contain a “smoking gun,” proving that Iran is violating its agreement with the superpowers.

“That’s not the issue,” a senior Israeli intelligence official told Al-Monitor on condition of anonymity. “It’s a very different story. This archive, which was stolen right out from under the Iranians' noses, proves two things. First, it proves that they have been lying to the whole world this entire time when they announced that they never wanted to achieve nuclear capacity for military purposes and that achieving that would run counter to the spirit of Islam. Secondly, it proves that they have not reneged on their original intent, and that they have not shelved their program. On the contrary, they have put it on hold so that they can relaunch it as soon as the agreement expires. The rest of the world needs to realize that. Now, anyone who wants to understand that will,” he concluded.

Meanwhile, Israel is reveling in the Mossad’s intelligence coup. Transportation and Intelligence Minister Yisrael Katz told Al-Monitor, “It was a challenging and riveting operation so unimaginable, that it seems to have been drawn from the script of some fictional Hollywood blockbuster. The truth is that no one would have ever imagined doing such a thing. It was a case of fact being stranger than fiction and one of Israeli intelligence’s greatest achievements of all time.”

When asked how the Iranians reacted, Katz responded, “When they first found out, two months ago, I assume that they were absolutely shocked. The whole issue was kept far away from the public, even in Iran. The number of people who knew the secret could be counted on one hand. They never dreamed that their greatest enemy would get its hand on their most closely guarded secret.” Then I asked Katz how the Americans responded. “With absolute admiration and awe,” he said.