Russia wants Turkey to hand control of Afrin province to Damascus, but Turkish President Recep Tayyip Erdogan says the territory will be returned to local residents at Ankara’s discretion. 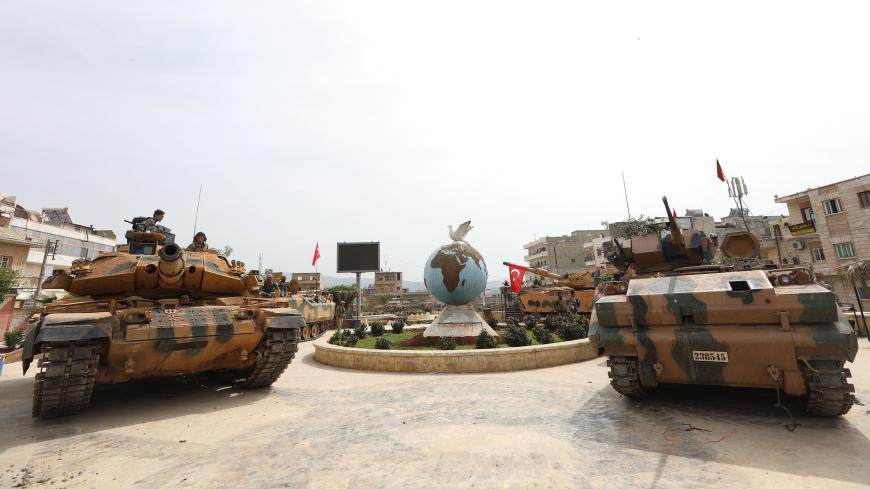 Turkish President Recep Tayyip Erdogan on Tuesday rejected a call by Moscow to hand control of Afrin province to the Syrian government, saying Ankara would withdraw its forces when it felt the time was right.

Russian Foreign Minister Sergey Lavrov said at an April 9 news conference that Moscow expects Turkey to relinquish Afrin to Syrian President Bashar al-Assad after having driven out the Kurdish People’s Protection Units (YPG) in March. He asserted that Erdogan had “never said that Turkey wants to occupy Afrin.”

“We always proceed from the fact that the easiest way to normalize the situation in Afrin, now that Turkish representatives say that the main goals they set there have been achieved, would be to return the territory under the control of the Syrian government,” Lavrov said.

Speaking to reporters, Erdogan called Lavrov’s remarks “a very wrong approach. We know full well to whom we will give back Afrin.” He added, “We will personally hand over Afrin to the people of Afrin when the time is right. But the timing of this is up to us. We will decide this, not Mr. Lavrov.”

The exchange highlights fissures in Turkey’s relations with Russia, even as the two sides have grown closer in recent years and are working together to find a solution to the seven-year Syrian civil war. During the first week in April, Erdogan hosted his Iranian and Russian counterparts at a summit in Ankara to discuss their joint effort to stabilize Turkey’s southern neighbor.

For the campaign against the YPG in Afrin, dubbed Operation Olive Branch, Ankara needed Russia's acquiescence to send its fighter jets into Syrian air space to bomb the Kurdish forces. It also needed assurances that Assad’s forces would not intervene in the operation, which Ankara launched in January.

Despite Turkey and Russia's political cooperation, they have deeply conflicting interests in Syria. Russia supports Assad, and Turkey backs rebels fighting him. A suspected chemical weapons attack on April 7 against Assad’s opponents may expose these differences in sharper relief.

Erdogan has also clashed with the United States, its NATO ally that has armed and trained the YPG-dominated Syrian Democratic Forces (SDF) in the fight against the Islamic State. Turkey considers the YPG a terrorist organization because of its links to the autonomy-seeking Kurdistan Workers Party, which took up arms against the Turkish state in 1984. Erdogan has vowed to extend his army’s operations beyond Afrin to defeat Kurdish militants who control large swathes of northern Syria, including areas where US troops have a presence, as well as parts of northern Iraq.

At the Ankara summit with Russia, Iranian President Hassan Rouhani had also said that Afrin should be relinquished to the Syrian army. After the meeting, one Turkish opposition politician criticized the lack of Syrian input in Afrin’s fate. Sezai Temelli, the co-chair of the pro-Kurdish Peoples’ Democratic Party, said, “It should be Syrians who are discussing Syria. It sounds like an anecdote: A Turk, a Russian and an Iranian are sitting around talking about Syria.”

The daily Cumhuriyet reported that Lavrov’s call has angered Turkish officials. Turkish Defense Minister Nurettin Canikli claims that predominantly Kurdish Afrin still poses a threat to Turkey and has said that its forces will remain in the region until the “risks are completely gone, and we will continue to remain there until our work is finished,” indicating that Turkey wants to see a political resolution of the war before withdrawing.

“Once the threat of terrorism is removed throughout the entire region and a central government is formed following elections, we will hand over [areas held by Turkey] to the government,” Canikli said.

Meanwhile, after a Cabinet meeting on April 9, Deputy Prime Minister Bekir Bozdag said that Turkey will return Afrin to the local inhabitants and will support the administration they form. “The Turkish Armed Forces are not occupiers in Afrin, and they are not there permanently,” he added.

In late March, Erdogan said that Turkey would appoint a governor for Afrin and help form a local administration as well as begin reconstruction efforts. Turkey’s military already provides security and backs a local administration comprised of Assad opponents in the Syrian town of Jarablus, where it intervened in 2016.

Erdogan condemned the suspected chemical weapons attack that killed at least 60 people in Douma, a rebel-held city in eastern Ghouta, outside Damascus, but stopped short of blaming Assad. The United States and other Western governments have pointed to Assad as the culprit, while Russia has said the rebels staged the attack. The Kremlin acknowledges that Turkey, Russia and Iran have no “agreed position” on the assault.

“Whoever carried out this massacre will pay a heavy price,” Erdogan told members of his ruling Justice and Development Party at the parliament April 10. Citing presidential sources, newspapers reported that on April 9, Erdogan had spoken with Russian President Vladimir Putin to express his uneasiness over the assault in Duoma and to urge him to work with Turkey to prevent civilian deaths and to allow aid to reach victims.

Back on the Afrin front, sporadic clashes continue, despite Turkey's declaration of victory in March after the YPG withdrew from the city of Afrin. The Britain-based Syrian Observatory of Human Rights reported that the YPG has targeted Operation Olive Branch forces in recent days. Erdogan raised the death toll from the conflict, announcing on April 10 that Turkish troops and the Free Syrian Army forces aligned with them had killed 4,071 “terrorists” since January. The Syrian Observatory puts the count lower, at 1,511 SDF fighters.

Assad’s government condemned the Turkish incursion as a violation of its sovereignty.