The Syrian Kurds have been notably silent on US President Donald Trump’s threat to punish Damascus over a suspected chemical attack on Douma, likely disillusioned and choosing to focus on condemning Turkey's ongoing offensive in Afrin. 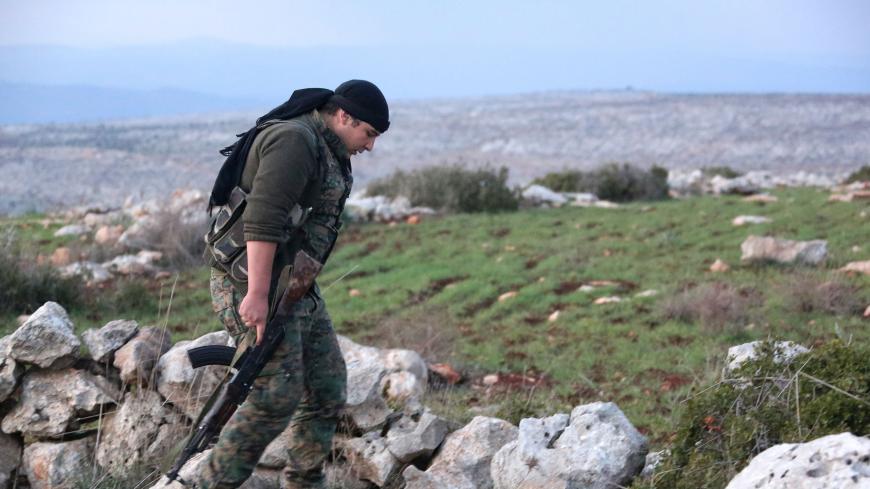 Ever since the American leader vowed via Twitter to punish Syrian President Bashar al-Assad over a suspected chemical attack on Douma, the dominant Kurdish political group in Syria, the Democratic Union Party (PYD), and its armed affiliate the People’s Protection Units (YPG) have refrained from airing views on whether or how the United States should respond.

Pro-PYD media outlets displayed similarly scant interest in a potential confrontation. Among the top stories on the popular Hawar news agency today was one about dozens of mothers gathering in Aleppo to commemorate the 25th anniversary of the death of Oweish, the mother of Abdullah Ocalan, the imprisoned Kurdish leader exalted by the PYD and the YPG as the shepherd of Kurds worldwide. Another lead item was about the YPG’s sister organization the People’s Defense Forces carrying out an attack against Turkish soldiers in the mountains of Iraqi Kurdistan.

The PYD-friendly Syrian Democratic Council did issue a statement on April 8 about “the massacre of Douma [in] which chemical gases that are internationally banned were used and caused the martyrdom of dozens and civilians.” But it refrained from pointing the finger of blame at the regime. “We in Syria's Democratic Council condemn whoever participated in this ugly massacre against our people in Douma,” the statement read. The cautious tone is very much in keeping with what the Kurds label “the third way,” which is maintaining a transactional peace with the regime and focusing on cementing autonomy in the estimated 20% of Syria under their control.

The council’s invective was instead reserved for Turkey over its military offensive against the mainly Kurdish enclave of Afrin. “The tragedies of our Syrian people, especially in Ghouta and Afrin coincided with each other, and the violations continue by the Turkish occupation army and its mercenaries against remaining civilians in their homes in addition to the suffering of thousands of people from [forced] displacement." The PYD calls Turkey’s opposition rebel allies grouped under the Free Syrian Army “mercenaries.”

The YPG is the the United States’ top ally against the Islamic State in Syria. The Syrian Kurds are clearly smarting over the fact that Washington appears willing to go to war against Assad over Douma when it remained inert as Turkey gobbled up Afrin. Estimates vary, but at least 300 civilians are believed to have perished in the Turkish offensive and some 140,000 were forcibly displaced.

Ankara has justified the incursion on the grounds that the YPG's ties to Ocalan, who launched a violent campaign for Kurdish rights inside Turkey, threatens its security.

Sinam Mohammed, the council's Washington representative who formally registered as a foreign agent under the Foreign Agents Registration Act on Jan. 31, offered Al-Monitor a simple explanation as to why her movement has refrained from taking sides over the suspected chemical attack on Douma: “We can’t say anything until it's clear what is going on. Only God knows what will happen.” In the meantime, Mohammed argued, the United States needs to speak up against Turkish and opposition rebel abuses in Afrin. Mohammed, who is from Afrin, told Al-Monitor, “The mercenaries have occupied my home and are using it as their headquarters. All of my family has had to flee and are living in misery in camps.”

Fabrice Balanche, a French academic and visiting fellow at the Hoover Institution who has studied Syria for decades, believes that Kurdish disillusionment over Afrin plays a big part in the PYD’s current stance. “The Kurds are disappointed by the United States. They believed the sacrifices they made to liberate Raqqa and the Euphrates River Valley from the Islamic State would give them protection against Turkey. The Turkish attack against Afrin proved the opposite. If Turkey attacks another territory controlled by the YPG, the United States and the West will not react,” he told Al-Monitor.

Ariz Kader, a Barcelona-based analyst of Kurdish affairs, reckons the PYD is hedging its bets in part because “if the PYD lobbies for strikes and then there are none, that limits their future ability to negotiate in good faith with the regime.” Moreover, Kader told Al-Monitor, the PYD realizes the Trump administration is “far more fickle than the US military and may choose to disengage [from Syria] rapidly.”

Kurdish confidence has certainly been shaken by Trump’s recent assertions that he wants an estimated 2,000 US special forces to return from Syria as soon as possible. Sources familiar with the administration’s decision-making told Al-Monitor on condition of strict anonymity that Trump wanted US forces out in six months “at the very latest” but that administration ideologues who advocate staying on to “counter Iran” and pragmatists who simply want to ensure IS is well and truly defeated before an orderly exit are continuing to push back.

Rebwar Rashed, the co-chair of the Ocalan-linked Kurdish National Congress, told Al-Monitor in a recent interview that the chances of a long-term US presence in Syria looked increasingly slim. Thus, rather than chase pipe dreams of pushing out Assad or containing Iran, the United States ought to leverage its control over energy-rich and agriculturally fecund northeastern Syria to extract political rights for the country’s 2 million-plus Kurds. And that, he argued, could only be achieved if the United States resumes contact with the Assad regime. Rashed said, “Three months ago we came to the [Trump administration] with a proposal to talk to the Syrian government, but nothing came of it.” While there is no love lost between the Kurds and the regime, Rashed predicted that should Assad fall in the absence of a negotiated peace, “the Sunnis will start slaughtering Alawites. A bloodbath will ensue.”

Still, hopes shimmer that US military action over Douma might alter Trump’s decision to leave. Balanche disagrees. “The Douma affair will not alter the US calculus in Syria. It may delay their departure a bit, but the process of disengagement has already begun.” Balanche cited Trump’s recent freeze on some $200 million allocated for stabilization in Syria, the push to restore relations with Turkey and the ceding of al-Bukamal, a strategic point on the Syria-Iraq border, to regime forces as signs that the United States is bailing out.

Balanche concluded, “if Israel’s security remains a concern,” the United States must reach an agreement with the Russians and the Turks to limit Iranian influence in Syria “because the ‘Iranian land bridge’ is already in place.”