The presidents of Iran, Russia and Turkey reassured each other that they are the "big three" of the Syrian peace talks and discussed their mission to resolve the civil war. 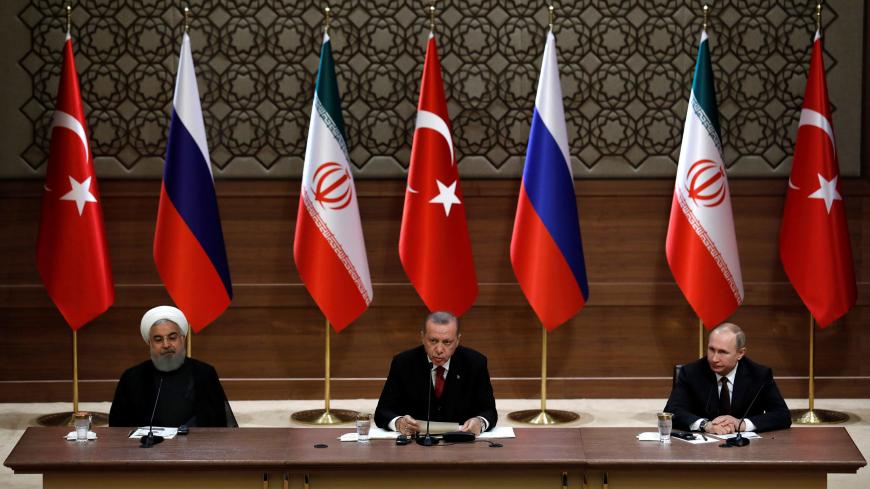 The leaders of Iran, Turkey and Russia met this week in Ankara to discuss potential political solutions to the Syrian civil war, while solidifying their positions as decision-makers, working to settle their own differences and agreeing to counter external "challengers" in the Syrian peace process: the United States, Israel and Saudi Arabia.

The presidents — Russia's Vladimir Putin, Turkey's Recep Tayyip Erdogan and Iran's Hassan Rouhani — don't seek to encroach on the legitimacy of the Geneva peace talks. Yet given the developments of recent months in and around Syria, the leaders have come to believe the real shots regarding Syria are being called in the meetings among themselves. And while Geneva is stalled, if not comatose, conditions on the ground are fast-changing. These three stakeholders in the Syria conflict feel they’d be better positioned to drive change themselves rather than waiting until it starts.

They consider their process as complementary to the Geneva talks. Their talks have also become an opportunity for each president to enlist support from the other two for what his country is most concerned with.

Hence, Erdogan spoke of Turkey’s significant role in defeating the Islamic State (IS) in Syria and its efforts against the People's Protection Units. According to Erdogan, the Kurdish group poses a threat to Syria's "territorial integrity."

During a news conference about the April 4 meeting, Rouhani praised the defeat of IS and stressed, “Some superpowers, including the United States, would like to use the terrorist groups of [IS] and Jabhat al-Nusra [also called Jabhat Fatah al-Sham] as an instrument of controlling this region.”

All three leaders, however, tried to make it clear they are consolidated on key matters and will withstand outside efforts to sow discord within the “troika alliance” and foil its work to solve Syria's problems.

“There are certain circles that have divided this territory among themselves, but this will not do for us. We are not taking it seriously,” Erdogan said. While the Turkish president didn't mention what “circles” he was alluding to, his Iranian counterpart didn’t mince words.

“The Americans [and] the Israelis were unsuccessfully trying to get in our way. … They wanted to help terrorists so that they could govern the region, and they wanted to make it so that the threat would linger on until the present, as this would be in [their interests]. They create a lot of problems for us. … This is exactly what we have agreed on today. The adversaries of our region planned to ruin Syria, but they are failing,” Rouhani stated at the news conference.

Putin described his concern in more general terms, talking about "the growing number of attempts to deepen ethnic and religious differences in Syrian society in order to break up the country and to preserve the conflict potential of the Middle East for years to come.”

The parties reiterated their commitment to past decisions and outlined an action plan for the next few months. Putin noted they “intend to keep the focus … on the political settlement of the Syrian crisis or, more precisely, promote an inclusive intra-Syrian dialogue … as soon as possible.” In his view, this should include forming a constitutional committee under the aegis of the UN in Geneva, where the Syrians “can independently determine the main parameters of state structure for a new Syria.” Earlier, Damascus rejected the idea of such a committee.

Another practical area of cooperation for the three states will be joint efforts within the working group established March 15 in Astana, Kazakhstan. The group will be dealing with liberating hostages, transferring the dead and searching for the missing. Russia and Turkey will also build a hospital in Syria’s city of Tell Abyad to treat refugees escaping eastern Ghouta.

The three presidents also agreed “to step up trilateral coordination in all aspects of anti-terrorist activity and increase information exchange,” which implies constant cooperation of the militaries and intelligence services. They also declared they will focus on humanitarian efforts. Their joint statement emphasized they are determined to “speed up efforts to ensure calm on the ground” and expedite the return of refugees.

“The current humanitarian situation in Syria is terrible," Rouhani said. Erdogan added, “We are carrying out the rebuilding process, all the three guarantor states. … [We] will move forward together confidently.”

Putin said, “Everybody is talking about the need to join the humanitarian relief effort for starters, but no one is doing anything practical except Iran, Turkey and Russia. We see minor supplies from the United Nations, but this is clearly not enough. And definitely there needs to be joint work to restore Syria’s economy, restore the infrastructure."

Recovery efforts, as critical as they are to restoring the Syrian state and ending humanitarian tragedy, could become an unspoken race for influence in post-war Syria. This is just one of many issues the three must settle.

“Russian companies are already taking an active part [in constructing social and infrastructure facilities]. Indicatively, they have begun some projects in areas that were only recently run by militants,” Putin said at the press conference. Earlier, Russian Energy Minister Alexander Novak noted that Moscow is cooperating with Syria's energy and oil ministries on some projects, and Russian companies are studying possible geological probes with Syria.

The trio also discussed the issue of exerting political control over a government in Damascus. A primary question for Moscow, once balance is restored, is whether embattled Syrian President Bashar al-Assad will be able to maintain stability in the country without direct Russian military support, including the air force. Beyond that, however, Russian interests could arguably be secured through means that don't necessarily imply territorial control. Given the geography and regional geopolitics, land disputes appear to be a bigger issue between Turkey and Iran.

In this regard, shifting Syrian demographics — including forced displacement of one ethnic group for others — and the future of Idlib, which increasingly looks like a dumping ground for radical groups, raise security concerns in Tehran and Damascus. Some in Russia suggest Turkey is working these factors to ensure leverage over Assad and to have a louder voice in the future political transition.

If that's the case, Rouhani’s reported call for Turkish forces to hand over the Syrian region of Afrin to the Syrian army signals that Iran wants to further empower Assad. This should be seen as disguised concern about a potential rise in Turkey’s role in northern Syria and in determining the country's political future.

While these don't all appear to be immediate concerns, Russia, Turkey and Iran have formed a “circle of friendship” in Syria to keep others out, even though the three have varying degrees of interaction with these “outsiders.”

A Russian diplomat privy to the summit discussions told Al-Monitor on condition of anonymity that the trio's members believe they are “stronger together.”

“Iran, Russia and Turkey are countries with different political cultures, different foreign policy practices and different interests. Although these differences remain and sometimes are bitter, we are trying to settle them with dialogue. At least [we're] offering solutions that could end the seven years of war. We have a vision of how to manage these things. Those who criticize our actions or our partnership do not have such vision. Their agenda hasn’t changed throughout these years; they're in the 'game of denial.' So what we are doing now is fairly unique,” he said.