Iraqi Kurds have made it clear in recent protests that they will make their voices heard and their votes count. 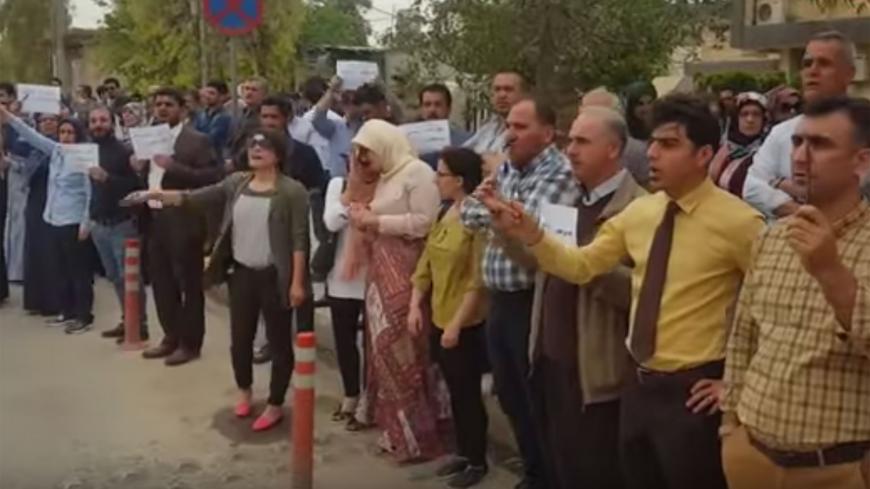 Teachers and other civil servants protest for the fourth day in Erbil, Iraqi Kurdistan, in a still from a video recorded March 29, 2018. - YouTube/AP Archive

The dust seems to be settling somewhat over Iraq's Kurdistan Region, but fallout from the discord among Kurds, and with the central government, could still be considerable come election time.

Thousands of demonstrators protested for months, and hundreds of civil servants have been on strike in several cities over delayed and reduced pay. Teachers and health care workers in Sulaimaniyah agreed this week to end or suspend their strikes after meeting with administrators, though details about the financial situation apparently have yet to be worked out. Those workers also voiced their anger because what money Baghdad had provided was being doled out among all of Kurdistan’s civil servants — none of whom had been paid since September. As a result, nobody received a full salary.

The protests have been most prominent in Kurdish areas not dominated by the ruling Kurdistan Democratic Party (KDP) — areas such as Sulaimaniyah, where tents were erected in front of the local courthouse, allowing people to participate in huge demonstrations. In other cities such as Rania, Koya and Kifri — where the KDP is less popular than the other ruling party, the Patriotic Union of Kurdistan (PUK), and the opposition to those ruling parties — hospitals and schools closed.

More significantly still, hundreds of protesters also hit the streets in KDP-ruled towns like Erbil and Dahuk, undeterred by local authorities refusing to grant them permits. Anti-government protests are rare in KDP territory, where discontent is hardly ever expressed openly for fear of retribution. But that fear didn't keep people from protesting this time, and it's not expected to discourage them from voting their minds in the May elections for a new Iraqi government. Their impact is expected to be even greater during Kurdistan parliamentary elections, currently scheduled for September.

Since the Kurds' costly fight against the Islamic State (IS) erupted in 2014, the Kurdistan Regional Government (KRG) hasn't been able to pay its 1.2 million civil servants their wages in full. Instead, the KRG cut those salaries by 25-75%, with the highest paid people, such as doctors and professors, receiving the largest cuts. Then, last year, after the Kurds defied Baghdad by holding an independence referendum in September, the central government imposed sanctions, withholding money budgeted for the KRG, making the situation even more dire.

As part of the recent detente between the Kurds and Baghdad, the Iraqi government resumed payments, but only in part, claiming that Kurdistan’s payroll is inflated by nepotism and corruption and that the Kurdistan government could use its own oil income to cover the deficit. This fed the protesters’ suspicions that their politicians have been skimming oil money, leading the protesters to accuse the KRG of stealing and lying.

The division of oil revenues is still unresolved. When the Kurds drove IS out of the region, they gained control of disputed areas previously held by Baghdad, including oil-rich Kirkuk. When the Kurds began making their own oil deals and keeping the income, Baghdad cut the region's budget.

While protests last week in Sulaimaniyah and other areas were generally peaceful, those in Dahuk and the KRG's capital city, Erbil, were marred by security force and police violence, said lawyer Hiwa Omer.

Omer, the coordinator of the Kurdistan Social Forum for Free Speech Groups, said he has submitted evidence to the Erbil prosecutor regarding dozens of cases in which people were beaten and even kidnapped by plainclothes members of the security forces and the secret police. The perpetrators mingled with the protesters while police in riot gear looked on.

“They hit three girls in front of us,” Omer said, adding that many attacks were indiscriminate, with women and old men also falling victim to the violence. “As they had taken all our phones, nobody could record it.” His organization has also reported these human rights abuses to the United Nations in Iraq.

A video of a teacher being kicked in the face and stomach March 25 by a plainclothes policeman went viral on social media, stirring public ire. The anger increased further when, on March 28, KRG Prime Minister Nechirvan Barzani criticized the protesters, saying that if they used knives and guns, the authorities would use the same methods against them. There were no reports of weapons being used by protesters.

Journalists were also targeted, and reporters were prevented from doing their work in Erbil and Dahuk. The Metro Center for Journalists' Rights and Advocacy said March 29 that in the previous four days it had documented 78 violations against 48 journalists, including 10 cases in which journalists were beaten and assaulted. Another 10 reporters have been detained. Authorities also seized some journalists' cameras and other equipment.

Amnesty International called on Kurdish authorities to “immediately put an end to the beating, harassment and intimidation of demonstrators and journalists,” stating, “They have a duty to ensure that everyone can exercise their right to peaceful protest without interference.”

The Kurdistan government has reacted to the uproar by promising to scrap cuts on the lowest salaries and setting a maximum deduction rate of 30% on the others. Although that didn't end protests in non-KDP areas, where the demonstrators were demanding that all cuts be eliminated, the demonstrations fizzled out in Erbil. According to Omer, this was because people felt they had shown that Erbil’s discontented residents could raise their voices. As one of the protesters said, “People are beyond their fear of the KDP.”

This state of mind, combined with the continued discontent, is expected to affect the May and September election results. While loyalty to the ruling KDP and PUK parties runs deep, it has also allegedly been bought sometimes with bribes of houses, land, cars and jobs — one of the reasons there are so many civil servants. And even though the Kurdish prime minister has accused the opposition of using the protests to further its political agenda, KDP and PUK loyalists have also joined in.

Speaking by phone from London, independent Kurdish political scientist Shivan Fazil predicted that the governing KDP and PUK will lose votes and the opposition will gain support because of broken promises and the violence unleashed on protesters. “After months without pay, they finally expected to receive a full salary. People will [also] have second thoughts about voting for the government parties because of the undignified way [citizens] were treated during the protests.”

The Kurdish opposition will increase its seats in both the Iraqi and Kurdistan parliaments, he predicts, with opposition members taking over ministerial positions in Iraq that in the past have been held only by KDP and PUK members. “Change could happen in Erbil, too, if we get a better government in Baghdad,” he added.

Fearing that some political parties will try to halt this changeover, Fazil is calling on the electoral commission to make sure the upcoming elections are "clean."

“Political differences between the Kurdish parties have been set aside in recent years,” he pointed out, as economic hardship, the war against IS and the conflict with Baghdad forced Kurdish politicians to show at least a modicum of unity. “All this will now be fought out at the ballot box.”