Israel is disappointed over the limited extent of the missile attack against the Assad regime and estimates that President Donald Trump will eventually withdraw US forces from Syria. 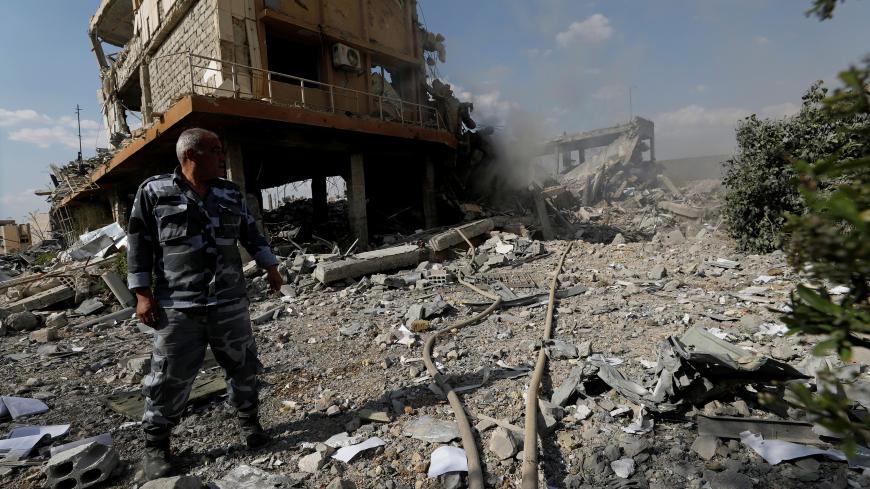 The American-British-French assault April 14 on the Bashar al-Assad regime’s chemical weapons infrastructure concluded a long and painful process of awakening among Israel’s political and military leadership.

“It’s certainly not a pleasant experience to be hit with over 100 Tomahawk cruise missiles fired by a superpower like the United States,” a senior Cabinet member told Al-Monitor on condition of anonymity, in what sounded more like bitter consolation. “Still, it is obvious to us that this attack does not increase America’s deterrent capacity in the region in any significant way, nor does it indicate whether President Donald Trump is planning what we would like to see happen in the future. Once the dust settles, it will become clear that President Trump did the minimum he could, which is far from what really needs to happen in order to rein in [Syrian President] Bashar al-Assad, [Russian President Vladimir] Putin and [Hezbollah Secretary-General Hassan] Nasrallah.”

The last time Trump launched strikes on Syria, in April 2017, the mood in Israel was very different. It could almost have been called euphoric. Jerusalem was convinced that a new sheriff had come to town, and that what happened in the past would not be happening anymore. The existing order was dead, and the “bastards” were planning to change all the rules. “What we need to remember,” a senior Israeli defense official told Al-Monitor on condition of anonymity, “is that the last time the Americans launched an attack in Syria was shortly after Trump entered office, when the whole world was worried about the compulsive new president, and even the Russians were preparing to take a blow. Putin,” he continued, “had not yet been declared the all-powerful sheriff in Syria. The Syrian civil war had not yet been decided, and the vacuum was significantly larger than it is today.”

After the Trump administration’s previous attack on Syria, optimists in Jerusalem were convinced that Trump was signaling that he had no plans to concede the arena to Putin. Unlike President Barack Obama, so the thinking went, Trump was really intent on restoring order there. He would not allow the Shiite alliance to seize control and establish an axis running from the Persian Gulf to the Mediterranean. As it was later learned, the reality is that Trump is no different than Obama, at least in this particular area. The Shiite alliance was formed, Iran is now laying a land bridge stretching from Tehran to Tartus (a major Syrian port), and the Americans will not be in Syria to deal with any of that.

Given this background, the first comment from the Israeli minister quoted above about the damage that 100 Tomahawk missiles can do was made mainly for reasons of morale. He was trying to convince himself that the US operation this weekend was bolder and more significant than it appears from the outside. “To show up today with 105 missiles, with Putin sitting in Syria itself, laying down the law can really be seen as a statement of intent,” said the Israeli minister. “In that sense, we hope that the message got through.”

These remarks, too, were a kind of self-consolation. Jerusalem is well aware that Trump is determined to leave Syria sooner rather than later. All attempts to convince him to stay have failed. Prime Minister Benjamin Netanyahu poured his considerable talents into that, while French President Emmanuel Macron even announced April 15 that he was able to convince Trump to stay. Still, the overall impression is that Trump was never fully convinced. An Israeli defense source said on condition of anonymity that “Trump’s professional sources in the field explained to him that it is impossible to leave right away. First, he has to complete his operations against the Islamic State. What this means is that everything can be postponed for a few months. On the other hand, it is obvious that the Americans won’t be here in the end, because the president believes that America needs to be in America. Anyone who wants American involvement in the region will have to pay for it.”

First and foremost, Israel needed American involvement to help it in its dealings with Moscow. While Jerusalem realizes that the American operation had nothing to do with Israeli interests in Syria, which focus on preventing Iran from establishing a strategic presence there, Netanyahu and Defense Minister Avigdor Liberman are still clutching at the idea that the cruise missiles, which spread terror across the Damascus skyline this weekend, are a signal to Putin that this front has not been abandoned entirely. According to this theory, Trump is preserving the right to get involved, even with force, if and when American interests suffer. What Jerusalem now hopes to do is convince Trump that it is in America’s interest to keep Iran away from the border fence with Israel, from the Mediterranean and from Syria’s air bases. The minimal, surgical American assault keeps some ember of hope alive. Israel can continue believing that there is someone it can rely on, despite the expected rapid withdrawal of American troops from the arena.

The bottom line is that when it comes to the northern front, the rosy dreams of the Israeli right, which moved to the forefront once Trump was elected, are rapidly being shelved. Trump is seen as providing the goods when it comes to Jerusalem (moving the embassy) and perhaps in having the United States pull out of the nuclear agreement with Iran (Jerusalem is convinced that Trump will announce this in May). On the other hand, when it comes to Syria, Israel is having a rude awakening. Trump’s aggressive tweets about Syria ended with little more than a whimper.

It is now the assessment of Israeli intelligence that this weekend’s attack caused no significant harm to the Assad regime. It did not threaten its stability, nor did it cause any long-term damage to Syria’s chemical weapons infrastructure, which was brought back to life after being declared dead after the last round and the agreement reached with the Obama administration. The overall impression is that Israel’s earlier euphoria was premature.

Despite earlier Western intelligence assessments, Assad kept much of his chemical weapons capacity and recently revived the manufacturing infrastructure for chemical weapons. Meanwhile, Israel stopped manufacturing gas masks two years ago, and collected all the protective gear that had been handed out to the population. Now it is faced with a broken civil defense system and difficult decisions to make. Assad still has chemical weapons, Iran is gaining a foothold in the heart of Syria and Nasrallah announced that Israel has launched a full-fledged war against Iran. How does Israel protect its population? Is it responsible to act as if the Syrian threat had been lifted?

As of now, Israel has no plans to change its strategic assessment. This relies mainly on the Israel Defense Forces' ability to act as a deterrent and the fact that the Assad regime is not yet on stable footing. Israel’s stratagem is to throw a monkey wrench into Putin’s plans, to pose a challenge to Assad’s stability and to prevent Iran from establishing itself in Syria until the superpowers reach the conclusion that it is up to them to establish order by keeping Iran away from Israel’s border fences. Israel is hoping to do all that without seeing the situation deteriorate into all-out war in the region.