Moscow and Cairo are fostering cooperation in various areas and are sure to maintain close bilateral relations in the midterm. 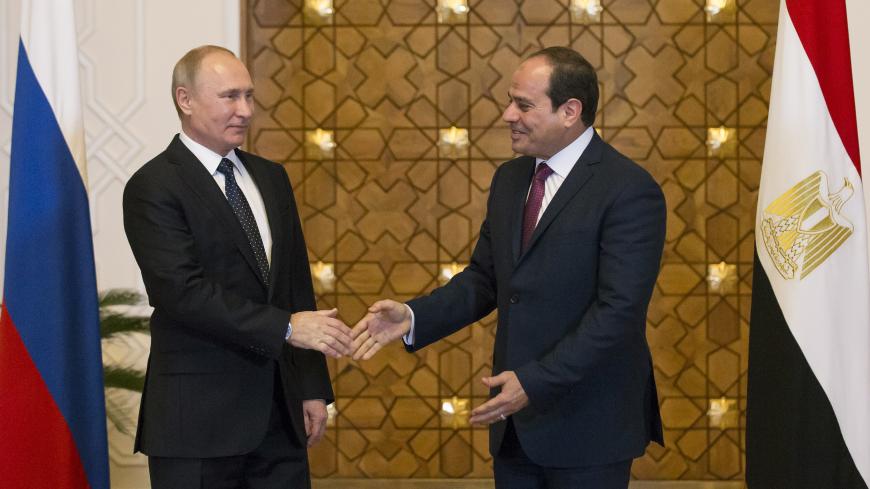 Now that direct commercial flights have been restored between their capitals, Russia and Egypt are looking to expand their affiliations.

President Abdel Fattah al-Sisi’s re-election enables Cairo to continue the same foreign policy toward Moscow. In a congratulatory cable to his Egyptian counterpart, Vladimir Putin expressed hopes for further cooperation, which is already rather comprehensive, between the two countries.

Russia is seeing progress on its two mega projects in Egypt: the industrial zone underway east of Port Said, and a long-term collaboration on a nuclear power plant at El Dabaa. In addition, the two nations are due to resume direct flights to popular resort destinations after a 2½-year suspension prompted by the bombing of a Russian charter plane over the Sinai Peninsula in October 2015. Wilayat Sinai, an Islamic State affiliate, claimed responsibility for the bombing.

The countries are gradually restoring tourist flow despite the threat of terrorism. However, any surge in outbound Russian tourism may come at the expense of Russian resorts in Sochi and Crimea, so Moscow is likely to stick to a balanced policy on this matter.

Military-technical and even military-political partnerships still top the priority list for Russia and Egypt. In November, Egypt consented to a five-year reciprocal arrangement to allow Russian military planes to use Egyptian facilities and airspace as long as either side provides a five-day notice. The deal raised much speculation. On one hand, many people believe the agreement will merely streamline regulations concerning regular joint military exercises of Russian airborne forces and Egyptian armed forces paratroopers. On the other hand, some Russian pundits believe the decision would not only enable Russian naval aviation to carry out surveillance in the Mediterranean region, but it would also strengthen Russia’s positions in Libya should an unfavorable scenario unfold there.

For example, Egypt opened in July what it says is the largest military base in the Middle East to protect the country’s western border with Libya and oil fields. At the same time, facilities at Sidi Barrani — near the Egypt-Libya border — were being reconstructed to prevent extremists, illegal migrants and smugglers from infiltrating the country.

In recent years, Russian media have occasionally mentioned Russia might be thinking of leasing the former Soviet air base at Sidi Barrani. Russia was even reported to have deployed special forces and drones there. Russia and Egypt have strongly denied such reports, with Sisi himself rejecting the idea that there is any foreign military presence in his land. Yet Algerian sources stated that Russia has provided intelligence support from Egyptian territory to Libyan Gen. Khalifa Hifter, whom it backs in that country’s civil war.

In general, Russian-Egyptian military and technical cooperation, which is increasingly becoming strategic, looks promising for both parties.

In the fall of 2015, Egypt signed a deal with Russia to purchase 46 Ka-52 Alligator attack helicopters. Cairo also reportedly placed an order for about 50 MiG-29M/MiG-29M2 fighter jets.

There are other contracts that have been kept under wraps as well. For instance, photos of the multimode 3D-radar Protivnik-GE on social media were the only evidence that Russians had supplied the cutting-edge radar station to the Egyptian army.

In the summer of 2017, Russia’s machine-building company UralVagonZavod appeared to have “leaked” its 2016 annual report, which was later removed from the website. The report highlighted plans to start licensed production of Russian T-90S/SK battle tanks in Egypt. At the moment, Russia and Egypt are apparently close to finalizing a contract for the licensed assembly of about 400 T-90S/SK tanks — half in SKD format (simple installation), and half in CKD format (requiring installation and welding of hulls and towers).

“Although the M1A1 Abrams tank manufacturing facility located outside Cairo in Helwan assembles tanks from US-supplied kits, Egyptian land forces need more, as the kits are shipped in small batches and every now and then the delivery is suspended for political reasons,” Andrey Frolov, editor-in-chief of Arms Export magazine, told Al-Monitor. He said similar issues have come up with US Boeing AH-64D Apache helicopters.

Moscow has indeed secured some major contracts to supply weapons to Egypt against strong competition with the United States. However, the supplies of arms and equipment hardly improve Egypt’s security situation, especially in the Sinai Peninsula. Political factors and Egypt’s inadequate anti-terror strategy based on warfare principles are not particularly helpful in defeating radicals.

Military operations carried out amid media blackouts can result in rumors of numerous civilian casualties, which Wilayat Sinai actively exploits to promote recruiting and intensify fear. A comprehensive approach to combating terrorism requires a flexible strategy and relevant political openness to prevent regime opponents and radicals from joining hands, rather than the current approach of cracking down on radicals, regime opponents and/or intellectuals. However, it’s questionable whether the Egyptian president — a hard-liner and advocate of coercion who disqualified all other would-be presidential candidates — would agree. Theoretically, it’s easier for Sisi to focus on foreign policy and diversifying ties to counterbalance Western reprisals for human rights violations. This state of affairs is playing into Russia’s hands. In turn, Egypt can play the Russia card against America.