Southwest Syria could become the next battleground in Syria's multiple regional wars amid a possible collapse in the US-Russian cease-fire agreement. 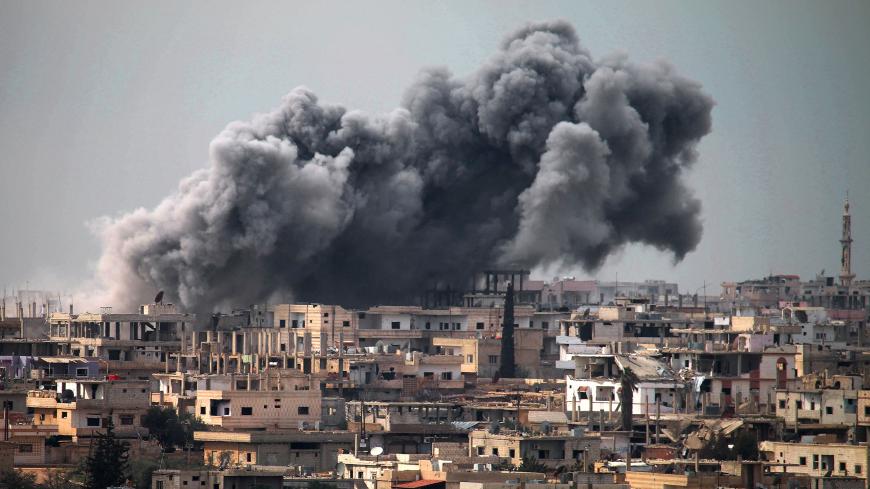 Southwest Syria could be the next confrontation zone in Syria’s multiple regional wars. The US-Russian cease-fire agreement is collapsing, except in the buffer zone on the Iraqi-Jordanian border. The Syrian regime and its allies are making their way through to the Nassib border crossing and the Golan Heights. These new dynamics are altering the calculations of Jordan and Israel, while further weakening the armed opposition on the southern front.

On March 12, the Syrian military launched airstrikes on Daraa province, the first violation of the cease-fire agreement. Civilians began to flee these areas, as the Russian military is using scare tactics. Spokesperson of the Khmeimim base, Alexander Ivanov, had warned a day before on March 11 that “after securing the perimeters of the capital [city] Damascus, [we seek] to eliminate terrorists present south of the country."

The United States promptly called for restraint and held an urgent meeting for the armed opposition groups operating under the Amman-based Military Operations Center, which has been inactive since late last year. Pro-opposition news websites have speculated that Washington is planning a wide-ranging military campaign in southwestern Syria.

However, a Pentagon official told Al-Monitor that the United States is focused on defeating the Islamic State (IS) in southeastern Syria and is "not involved in monitoring de-escalation zones.” This comment from the Pentagon is noteworthy, considering the presumed existence of the Amman Center for cease-fire control in southwestern Syria, which includes Quneitra, Daraa and Suweida provinces.

More importantly, the two major players in southwestern Syria — neighbors Jordan and Israel — have been surprisingly silent as the Russian-backed Syrian regime expands territorial gains. There might be Russian assurances to both countries that their interests will be preserved.

Jordan seems ready to move on

Jordan has for a while now had fatigue from the Syrian civil war and has recently failed to convince the Syrian armed opposition to transfer the Nassib border crossing to the Syrian regime. Amman is prioritizing the need to reopen this crossing to reinvigorate its economy. Russia is not sanctioning any attack in the Jordanian buffer zone near the Iraqi border where the US-controlled al-Tanf base is located. The Syrian regime is advancing along the Damascus-Daraa highway and is about to reach the Nassib border crossing.

Meanwhile, armed opposition groups on the southern front have been publicly talking about uniting their efforts to push back the Syrian regime and its allies; however, they have long been dependent on foreign support to operate. The armed groups operating in Daraa remain divided with no coherent military structure. This past January, the Revolutionary Army and the Sunni Youth Forces clashed in eastern Daraa, and a disengagement force had to be deployed between them. Furthermore, radical groups are benefiting from the chaos. Khaled bin Walid, which pledges allegiance to IS, attempted this week to advance from the Yarmouk basin toward the Jordanian border.

Amman’s ability to act in this turmoil is disabled by US-Russian tensions; hence, Jordan will most likely not pick winners in the race to control Daraa. The challenge is what will happen after the Syrian regime reaches the Jordanian border. Will the armed opposition launch an attack on the Syrian regime deployed along the Damascus-Daraa highway? Will the regime use the same tactics of eastern Ghouta by dividing the territories of rival armed opposition groups and compel them to make separate concessions? The collapse of the US-Russian cease-fire in southwest Syria undermines Jordanian interests, and Amman will now have to limit the damage.

Israel continues to target the Syrian regime and Iranian proxies with Russian consent — or at least without Russian objection. What is remarkable, though, is the deafening Israeli silence and inaction as the Syrian regime has now reached the 1974 cease-fire line near the Lebanese-Syrian border.

The Syrian regime is expanding control through local militias that are reportedly being trained by Hezbollah, emulating the model of Popular Mobilization Units in Iraq. The Syrian regime has recently combined these local militias in Quneitra under one banner (Homeland Shield/Quneitra Hawks Forces). Hezbollah cleared last year its military bases in Quneitra for them, most notably in the so-called death triangle — the intersection of the countryside of Daraa, Quneitra and Damascus — where major battles occurred between the regime and the opposition. These forces have also recently controlled what is known as Area 99 in the Golan Heights section that is not under Israeli control, which leaves them three kilometers away from Israeli troops. It will be hard to see how the armed opposition can prevent the Syrian regime from controlling the Quneitra province without regional support. Unlike Turkey and Jordan, Israel cannot openly endorse a Syrian armed group to fight on its behalf or build a buffer zone on an Arab land.

Israel sent last week a request to the United Nations Disengagement Observer Force (UNDOF) to redeploy its peacekeepers along the cease-fire line as the Syrian regime has reached the area of separation near the occupied Golan Heights. UNDOF denied the request. US Acting Assistant Secretary of State David Satterfield visited last month UNDOF headquarters in Camp Ziouani in the Golan area. Countries sending the peacekeepers will expect US-Russian guarantees that their troops can operate in a safe environment.

Israel recently sent two subtle messages to Russia. First, the Israeli army conducted last week an exercise that stimulated a multifront war in which Russia intervened to prevent Israel from attacking Syria. Second, Israel publicly confirmed this week that it had launched airstrikes in 2007 against a potential nuclear reactor in Syria. Israel is preparing contingency plans for the coming period and is rather worried about the Russian restraint on its activities in Syria.

The collapse of the US-Russian cease-fire agreement might realign once again Jordanian-Israeli interests and makes Moscow the sole powerbroker in southwest Syria. Israel can only blame Russia moving forward if an Iranian tangible threat emerges on its border. Balancing Israeli and Iranian demands could be Moscow’s make-or-break deal in Syria.