Turkish diplomats will meet in Washington tomorrow, hoping to build on what Ankara has said are US pledges to push Syrian Kurdish fighters out of Manbij in northern Syria. 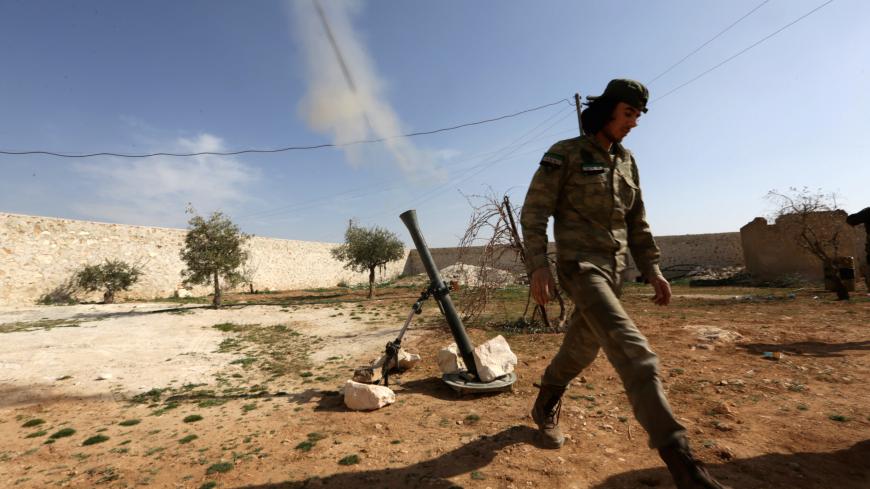 Turkish and US officials were expected to resume talks on Syria in Washington tomorrow in an effort to ease tensions over Syria amid repeated warnings from Turkey’s President Recep Tayyip Erdogan to expand operations against a Syrian Kurdish militia allied with the United States.

Turkish officials aired cautious optimism that its delegation, led by Foreign Ministry Undersecretary Umit Yalcin, would come away with enough to pave the way for a visit by Turkish Foreign Minister Mevlut Cavusoglu to Washington soon after to finalize a deal on Manbij.

"I think that Turkish-US relations will be better in the days to come," said Volkan Bozkir, the head of the Turkish parliament’s foreign affairs committee and a member of Erdogan’s ruling Justice and Development Party.

Turkish diplomats apparently hope to build on what Cavusoglu earlier described as US pledges to push the Syrian Kurdish militia known as the People’s Protection Units (YPG) out of the predominantly Arab town of Manbij.

The once-obscure town shot to global attention following threats by Erdogan to attack Manbij despite the presence of US special operations forces in the area. Turkey’s National Security Council, presided by Erdogan, renewed these threats yesterday. In a harshly worded statement, the council said, “[T]errorists in Manbij should be removed from the region as soon as possible, or Turkey will not abstain from taking [the] initiative.”

Turkey insists that the YPG is no different from the Kurdistan Workers Party (PKK) rebels fighting for self-rule inside Turkey and that it poses an existential threat to its national security and should be immediately ditched by the United States.

Turkish optimism was fed by soon-to-be-former Secretary of State Rex Tillerson after his three-hour meeting in Ankara with Erdogan and Cavusoglu in February. At the time, the sides reportedly agreed on the broad outlines of a plan that foresaw, among other things, joint patrols in the Manbij area by US and Turkish forces and Syrian Arab rebel forces vetted by the US-led coalition, and the withdrawal of YPG forces to the east of the Euphrates River. As Turkey saw things, all YPG influence over Manbij, including its local administration, would be excised.

But the trouble was that State Department officials, who are pushing to repair relations with Turkey, reportedly made the pledges before the Pentagon signed off on them. And several well-informed sources familiar with the administration's thinking on the issue told Al-Monitor that the Pentagon — and especially the US Central Command, which is responsible for operations in Syria — fiercely objected to them. In the meantime, President Donald Trump dismissed Tillerson, forcing a hiatus in the Turkish-American talks.

The sources noted that in the interim the deal continued to be aggressively pushed by the US Embassy in Ankara, the State Department’s Bureau of European Affairs and certain members of the department’s strategy and planning staff. The sources said the latter include Ret. Col. Rich Outzen, an associate of former national security adviser Michael Flynn, who handles the Turkey file and speaks fluent Turkish. Their voices are being more widely heard amid mounting worry that Turkey is spinning out of NATO’s orbit straight into Russia’s arms. A quick and immediate fix would be to dump the YPG, the pro-Turkey camp’s thinking goes.

But even as the Pentagon has quietly begun providing real-time intelligence on PKK targets in northern Iraq, US Central Command is pushing back on a deal on Manbij on Turkey’s terms. It does not trust the Syrian Arab rebels allied with Turkey, who have displayed overtly hostile behavior to American forces in the past. One Western official, speaking to Al-Monitor on condition of strict anonymity, went as far as to label some of the groups currently fighting with Turkey against the YPG in Afrin “jihadists,” a claim that has been widely echoed by the YPG.

The bigger worry, however, is that if the United States is seen to capitulate to Turkey over Manbij, this will signal weakness to the millions of Kurds and Arabs living in coalition-protected territory and will unravel the fragile cohabitation struck between the YPG and its Arab allies as they seek to destroy the remnants of the Islamic State and restore a semblance of stability in northeastern Syria. The result may well be conflict between Arabs and Kurds, rendering a continued US military presence on the ground unsustainable. “[If] the US cedes to Turkey on its terms for Manbij, it may as well pack up and leave,” the Western official noted.

Some analysts say this is precisely what Turkey and its new ally in Syria, Russia, which greenlighted Turkish operations against the YPG in Afrin, are aiming for. President Trump reportedly warned Erdogan against any unilateral moves on Manbij during a March 22 telephone exchange.

Turkey’s strategy appears to be two-pronged: to force the United States to choose between itself and the YPG, and if it persists in partnering with the Kurds to be either  prepared for further Turkish military action or subversion at the very least. At the same time, Turkey wants the United States to stay on in Syria until Syrian President Bashar al-Assad is forced to step down and Iranian influence in Syria is diminished. Turkish officials reckon, among other things, that Assad’s removal would offer a face-saving exit for a resumption of ties with the regime, renewed collaboration against the Kurds and allow Turkish contractors to compete for a slice of the reconstruction pie.

Nicholas Heras, a Middle East security fellow at the Center for a New American Security, told Al-Monitor, “Turkey has a large network of Arabs from northeastern Syria that it has cultivated and that it is preparing to use to force the PYD out of northeastern Syria.” Heras was referring to the YPG’s political arm, the Democratic Union Party. Heras continued, “These Arabs, many of whom are in Turkey now or have their entire families in Turkey, are a tremendous source of influence for the Turks in northeastern Syria. The Syrian Arabs that Turkey is assembling is a sharp sword that Erdogan is dangling over the American project in Syria.”

Syrian Kurdish officials insist the sword has already been wielded. They have yet to provide evidence to back their claims, but Kurdish officials have blamed Turkish operatives for the murder earlier this month of Omar Alloush, the co-head of the Raqqa Civil Council’s Public Relations Committee.

Alloush — an ethnic Kurd who was lauded by the coalition for his bridge-building between Arabs and his own community — was killed with a silenced firearm in his home in Tell Abyad, bordering Turkey. Shervan Darwish, spokesman for the Kurdish-led Manbij Military Council, was injured in a March 23 attack that took place on the road between Manbij and Aleppo. A commander for the YPG-led Syrian Democratic Forces (SDF), which is the coalition’s top ally against Islamic State, told Al-Monitor via WhatsApp, “It's true he was injured, but he is recovering, and all indications are that Turkey was behind this attack as well. We have intelligence that they had been planning this for a while.” The commander said the assailants had not yet been apprehended, and he was unable to furnish concrete details substantiating his claims. Turkish officials, who have not commented on any of the allegations, could not be reached for comment.

He also asserted that Turkey’s push on the town of Tell Rifaat had been stalled by its failure to reach an agreement with Russia. The SDF official said regime forces had returned to the town in even larger numbers after briefly withdrawing. “The disagreement appears to be over the Menagh air base [near Tell Rifaat], which neither the Russians nor the regime is prepared to hand over to Turkey and the rebels," he said. His version of the latest developments in Tell Rifaat could not be independently verified.

In the meantime, Heras observed, "Turkey is putting the Americans on notice that the only path forward to stability in the US zone in Syria is one that Trump walks hand-in-hand with Erdogan.”