John Bolton's upcoming role as national security adviser is controversial not only in the United States; it's raising eyebrows, and concerns, around much of the rest of the world. 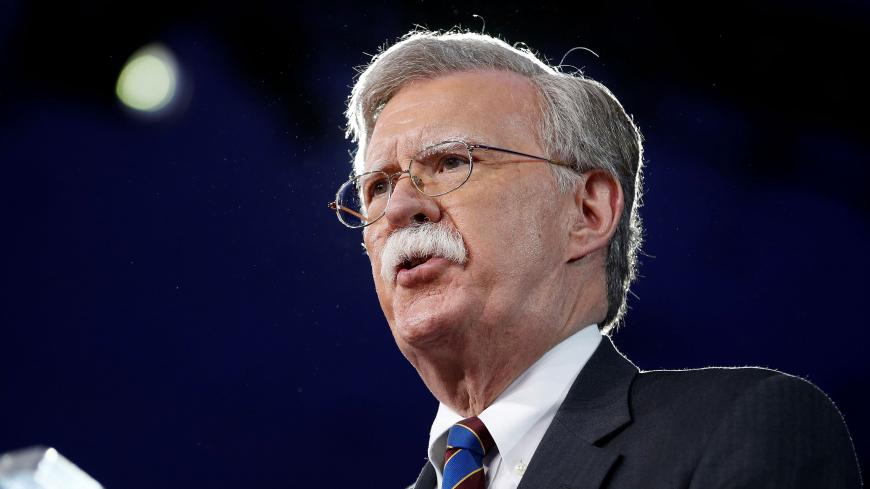 MOSCOW — Hours after US President Donald Trump announced that H.R. McMaster had departed as national security adviser and would be replaced by John Bolton — a longtime detractor of Iran, Iraq, Russia and North Korea, among others — Russia was among the first to react to the news.

Though some Russian officials reacted cautiously and expressed a willingness to work with Washington regardless of who Trump puts into key foreign policy posts, others made it clear that Moscow is genuinely concerned by the course American foreign policy has taken in recent months. Bolton, who was named to the position March 22 — near the 15th anniversary of the start of the US campaign in Iraq — advocated for that war and still does. It's an understatement to say he is seen as a controversial figure.

“Bolton, along with Bush, Cheney and Rumsfeld, was an ardent supporter of the war in Iraq. A supporter of jihadists for the sake of overthrowing [Syrian President Bashar al-Assad]. A great specialist in interventions and aggression, and adept at the use of force," Russian Sen. Alexey Pushkov, the chair of the Council of the Federation Committee on Informational Policy, wrote in a March 23 tweet. He was referring to former President George W. Bush, Vice President Dick Cheney and Defense Secretary Donald Rumsfeld.

Trump has replaced McMaster, a "hawk," with "super-hawk and neocon John Bolton," said Pushkov, who is also active on Russian foreign policy matters. "McMaster is a general. Bolton is the ideologue of a new cold war, a convinced opponent of Russia."

Georgi Asatryan, an expert on US policy in Afghanistan and the Middle East, told Al-Monitor that Bolton’s appointment to the key position in the administration means “a neoconservative trend in US foreign policy is being aggrandized.”

As hawkish as McMaster is, he was considered a moderating influence in Trump's White House.

“Bolton is an antithesis to a moderate Gen. McMaster," Asatryan said. "Given Bolton’s biography and views, one can imagine what kind of advice he would be giving to Trump. Top it off with the fact that [CIA Director Mike] Pompeo, a man with similar perspectives, is going to take over as the state secretary, Washington’s neoconservative pivot is evident. It doesn’t mean the US will go to bomb Iran and North Korea tomorrow, yet the probability of making tough, if not radical, decisions has skyrocketed.”

Moscow’s primary concerns with the Bolton appointment — much as with Pompeo's controversial nomination as a replacement for Secretary of State Rex Tillerson (which still has to be confirmed by the Senate) — relate to following issues: the way Bolton will approach rising US-Russia tensions, the future of the Iran nuclear deal, the prospect of talks with North Korea, a potential change of course in Syria, and how Bolton advises Trump to tackle China.

“We are watching the appointments in the administration with attention. We are ready to work constructively to resolve accumulating issues in our bilateral relations in international security, strategic stability as well as a number of regional crises and conflicts,” RIA news agency cited Ryabkov, who is frequently rumored in Moscow foreign policy circles as one of the potential successors to Foreign Minister Sergey Lavrov in the new government President Vladimir Putin will be announcing after his inauguration in May.

Later, Kremlin press secretary Dmitry Peskov commented on the appointment, saying: “As for Bolton, this is, no doubt, a right of the US president; this is certainly not our business. We [just] hope that the US leadership will have more people who can steer away from the surge of Russophobia that has swept many countries, including the United States.”

There were very few commenters in Moscow who welcomed Bolton's appointment, and even they believe Trump will now be more likely to pull out of the Joint Comprehensive Plan of Action with Iran, which was negotiated during the administration of former President Barack Obama.

Konstantin von Eggert, a political observer at the TV Dozhd (TV Rain), a Russian liberal independent channel, wrote on Facebook that the deal "may be seen as buried right away."

In its current form, at least, the nuclear deal won’t last, he said. Bolton has long seen "the Kremlin’s dances with Iranian mullahs” as a national security threat, even when he became undersecretary of state for arms control and international security in 2001. "If there’s one man who [could have convinced] Trump to not call Putin [to congratulate him on being re-elected], it’s Bolton."

Bolton doesn’t favor the European formula of keeping doors open for dialogue with Moscow, Beijing, Tehran or some others and he may even slam them shut, von Eggert said. "For Israel, it’s good news, for Palestinians — including [President Mahmoud] Abbas — not so much, to put it mildly. Compared with Bolton, [Defense Secretary Jim] Mattis is a [peaceful] koala. It won’t be easy [with Bolton], but it will be interesting.”

Dmitry Suslov, a program director at the Valdai Discussion Club, a Moscow think tank, believes Bolton’s appointment is in line with Trump’s strategy of “illiberal hegemony."

“Pursuing hardcore hegemony, increasing superiority over other states, intensifying containment over adversaries with a more unilateral foreign policy when the opinion of allies and partners is being dismissed, seeking a freer movement of actions for itself — all of this meets Bolton’s own convictions and it is what he was doing in the Bush administration,” Suslov told Al-Monitor.

Suslov argues that one potential contradiction between Trump and Bolton is the role of ideology and democratization in US foreign policy.

“Trump doesn’t seem to advocate either, whereas Bolton was one of those who called for interventions under the pretext of 'democratizing the Middle East.' Yet in recent months, there was a certain inclination to make American foreign policy more ideology-oriented, especially in terms of arguing for containment of Russia and China, by framing [the situation] as 'the free world' (led by the US) against 'the authoritarian bloc' (led by China and Russia). If that is the case, Bolton will reinforce this angle. Therefore, we may expect more containment policies vis-a-vis China, Russia and other US adversaries — a more assertive course of actions vis-a-vis North Korea and Iran,” said Suslov.

Experts and policymakers in Moscow differ on whether Bolton is going to align with Trump’s own “pragmatic approach” to Russia and abide by his promise to the president not to “start any wars” or apply more pressure on Moscow by advocating for additional sanctions, supplying arms to proxies of Russian opponents and raising stakes in Ukraine and Syria.

One of Bolton’s most recent remarks on Russia came March 2, shortly after Putin’s aggressive address to the Federal Assembly, in which the president said Russia is testing new nuclear arms superior to those of the United States and capable of defending national security and sovereignty.

“There needs to be a strategic response to Russia’s new nuclear missiles to show our allies in Europe that we will not let Russia push the US or its allies around,” Bolton said.

Mulling over Russia's possible response to potentially more assertive American policies, Suslov believes Moscow will intensify its dialogue with US allies, such as Japan, France, Germany, who are equally concerned with the US foreign policy shift, as well as with India, China and other power centers.

“Russia will also have to reinforce its own containment. Under current circumstances, the things President Putin proposed in the Federal Assembly address [an arms race] seem to have no alternative,” Suslov concluded.