The path to a nuclear-free Middle East

Prime Minister Benjamin Netanyahu should understand that he cannot forge a unified front with Saudi Arabia against the Iran-led Shiite axis while thwarting Saudi plans for commercial nuclear energy. 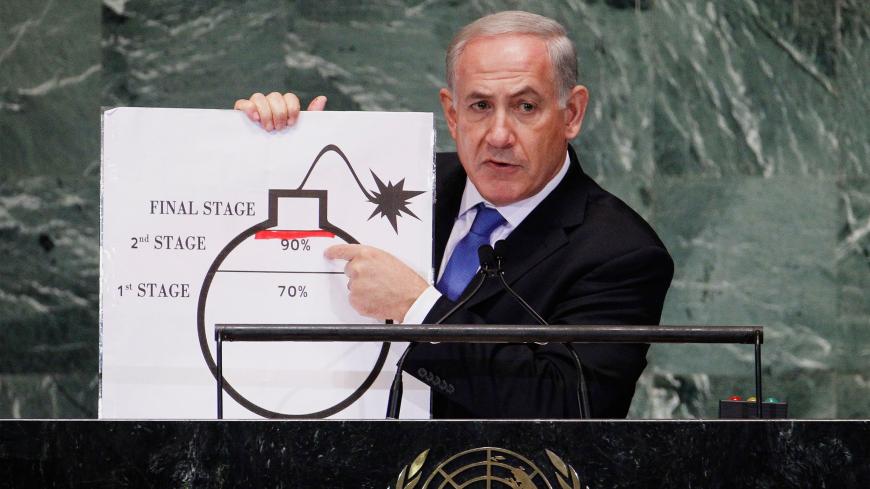 Israel's Prime Minister Benjamin Netanyahu points to a red line he has drawn on a graphic of a bomb used to represent Iran's nuclear program as he addresses the 67th UN General Assembly at UN headquarters, New York, Sept. 27, 2012. - REUTERS/Lucas Jackson

Prime Minister Benjamin Netanyahu has several good reasons to want early elections held in June. Much has been written about his desire to face a test of public confidence before facing a criminal trial, if Attorney General Avichai Mandelblit decides to indict him on bribery charges.

Speculation has been rife that he plans to turn the 70th anniversary of Israel’s independence on April 19 into the high point of an election campaign. His failed attempts to hijack the Independence Day opening ceremony on Mount Herzl, traditionally hosted by the Knesset Speaker, also figured in assessments. Preferring June for elections has additional significance of no less importance to Netanyahu: In mid-May, US President Donald Trump is due to decide on whether to stick with the 2015 nuclear deal between Iran and the five world powers.

Trump's decision to fire Secretary of State Rex Tillerson and replace him with CIA Director Mike Pompeo strengthens the likelihood that he will renege on the nuclear deal. In November 2016, as a candidate for the CIA job, Pompeo tweeted, “I look forward to rolling back this disastrous deal with the world’s largest state sponsor of terrorism.” As a member of Congress, Pompeo spoke out in favor of a military strike against Iran’s nuclear facilities.

Meanwhile, Netanyahu is probably the public figure most identified with the campaign against the nuclear deal, which bears the imprimatur of former President Barack Obama. Renewed US sanctions against Iran and saber rattling at Tehran would elevate Netanyahu to the standing of Israel’s national savior from “another Holocaust,” to quote him. Invoking Case 1000 against Netanyahu, does one oust such an outstanding leader merely because he accepted a “few cigars” from wealthy patrons?

Last November in an interview on the television program Uvda, Netanyahu’s friend and lawyer Attorney Jacob Weinroth stated what he claimed was the prime minister's great advantage: “He is basically an American. He’s not Israeli, really.” That, however, is his greatest drawback. Israel may be too small for his shoes, but the Constitution of the United States, where Netanyahu spent formative high school and university years, bars immigrants from the presidency, thus preventing him from foisting Israeli government policy and interests on that country.

In fact, Netanyahu’s nuclear policy is totally different than Trump’s. Take, for example, Trump’s willingness to meet with North Korean dictator Kim Jong-un, who prides himself on his country’s nuclear arsenal. Were it not for Trump’s obsessive need to erase every last vestige of his predecessors’ policies, chief among them Obama's, Trump might not have objected so vehemently to the nuclear deal with Iran.

On March 9, Channel 10 news reported that during a March 5 meeting at the White House, Netanyahu had asked Trump to block a planned sale of US nuclear reactors to Saudi Arabia, or at least to prevent the Saudis from acquiring a uranium enrichment capability. The Prime Minister’s Office did not deny the report, but took this festive opportunity to remind the public that Netanyahu had always warned that the “nuclear agreement with Iran could generate demands by countries in the region for the same type of capability with which the deal provides Iran, including uranium enrichment.” Obviously, “countries in the region” do not include Israel.

Trump, like his predecessors, stands not to prevent Israel from amassing dozens or even hundreds of nuclear bombs, according to foreign media reports, far removed from the eyes of International Atomic Energy Agency’s inspectors or to confront Israel about its persistent refusal to sign the Nuclear Non-Proliferation Treaty (NPT). There is nonetheless a vast difference between allegedly allowing Israel to develop and maintain nuclear capabilities, including the acquisition of nuclear warheads, and a nuclear embargo on the other countries in the Middle East, including on nuclear reactors for commercial purposes.

The George W. Bush administration announced in 2008 that the United States had decided to help the Saudis build nuclear reactors for peaceful purposes. The White House said at the time that the two countries would cooperate on nuclear issues in order to protect the Saudis' energy infrastructure from radical Islamists, among other reasons. The agreement, it should be stressed, included the supply of enriched uranium.

Saudi Arabia is not alone. In January 2017, the head of Jordan’s Atomic Energy Commission, Khaled Toukan, said his country expects to obtain bids for the construction of nuclear reactors from China, the Czech Republic, Japan and the United States. In addition, Egypt, Algeria, Morocco, Tunisia and the United Arab Emirates have long expressed interest in developing civilian nuclear programs. As Trump reportedly told Netanyahu, if the United States does not meet the Saudis' needs in this regard, Russia, China and European states would be happy to sign agreements worth billions of dollars for their coffers.

Instead of fighting against nuclear plants throughout the Middle East like tilting at windmills, the Israeli government should shift policy on this important issue in accordance with the changing realities in the region and the world. One cannot work to forge a unified front with Saudi Arabia against the Shiite axis led by Iran and at the same time act against the interests of that key Sunni state. The risk of a country clandestinely reconfiguring a reactor designed for peaceful purposes to achieve a nuclear weapons capability should not be dismissed. Still, the Iranian case illustrates that even a signature on the NPT is no guarantee against a nuclear threat by totalitarian regimes. This is doubly true in a region like the Middle East, which is hardly a paragon of political stability.

Nonetheless, US withdrawal from the Iranian nuclear deal would not remove the threat of the Middle East becoming a ticking nuclear time bomb, nor would Netanyahu’s ineffectual effort at torpedoing the Saudi nuclear deal contribute to averting a nuclear war in the region. The only option Israel has not examined is the 2002 Arab Peace Initiative, also known as the Saudi Initiative. Sadly, even on its 16th anniversary, in two weeks’ time, it will continue to gather dust.

The Arab Peace Initiative could actually serve as basis for nuclear demilitarizing of the region, since Israel’s official stance is that it will back nuclear demilitarizing only when the Middle East achieves overall peace. In that context, one should remember that last December, Iranian President Hassan Rouhani signed the final communique of the Organization of Islamic Cooperation in Istanbul, which included support for the 2002 Arab Peace Initiative. Unfortunately, Israel did not respond. Luckily for Netanyahu, no one is ever indicted on charges of criminal neglect of such strategic interests.