Turkey upends US Syria strategy with attack on YPG

Ankara seeks green light from Moscow, not Washington, in attack on US partner; UN warns of consequences of continued fighting in Eastern Ghouta and Idlib; local council in Aleppo confiscates land of Islamic State families. 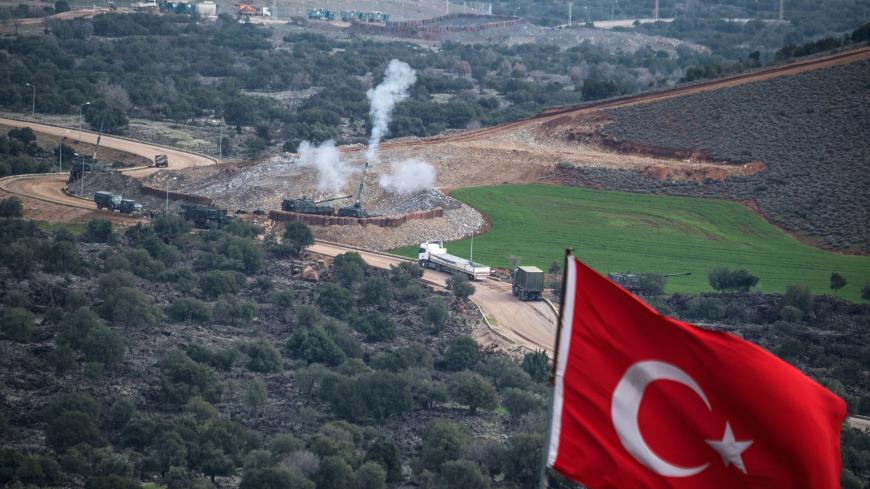 Turkish artillerys shell the People's Protection Units positions near the Syrian border on Jan. 21, 2018 near Hassa, in the Turkish province of Hatay, as Turkish ground troops entered Syria today to push an offensive against Kurdish militia as rocket fire hit a border town in apparent retaliation. - GETTY/Bulent Kilic

Erdogan: "We don’t care what they say"

Turkish President Recep Tayyip Erdogan finally delivered on his threat to attack against towns in the Kurdish-controlled enclave in Syria. The timing of the assault, dubbed Operation Olive Branch, followed an announcement by a military spokesman for the US-led global coalition against the Islamic State to build a 30,000-strong border force under the command of veteran Syrian Democratic Forces (SDF) fighters, and a green light from Russia, which may support a short Turkish incursion to facilitate a role for Syrian government forces in the north.

As we wrote in this column in August, “Turkey’s preoccupation with beating back Syrian Kurdish control in northern Syria could open the door to some type of accommodation with Damascus.”

Of little consequence in Erdogan’s decision were either the carefully chosen words of US Secretary of State Rex Tillerson in rolling out the Trump administration’s new Syria strategy Jan. 17, which acknowledged the “concerns of our NATO ally Turkey,” or the urgent clarifications about the border force by both Tillerson, who met with Turkish Foreign Minister Mevlut Cavusoglu the next day, and the Department of Defense.

In a sign of how low US-Turkey relations have sunk, Erdogan replied to his “NATO ally,” the United States, “We don't care what they say. … They will learn how wrong it is to trust a terror organization." Ankara considers the People’s Protection Units (YPG), which make up the bulk of the SDF, as an arm of the Kurdistan Workers Party, which both the United States and Turkey have labeled a terrorist organization. The Turkish president believes that the United States has reneged on earlier commitments to contain YPG expansion in northern Syria, along the Turkish border.

Fehim Tastekin explains that the announcement of the border force, in Turkey’s view, “means the US-YPG partnership will not end with the collapse of the Islamic State (IS), as Ankara had hoped. In his last phone conversation with President Donald Trump, Turkish President Recep Tayyip Erdogan was led to believe that US assistance to the YPG would end. According to Turkish Foreign Minister Mevlut Cavusoglu, Trump told Erdogan, 'I gave instructions. No more weapons will be delivered.' Referring to the phone call, the White House said that Trump had informed Erdogan of 'pending adjustments to the military support provided to our partners on the ground in Syria.' The United States then assured the YPG in their private talks that they would not leave the region until a political solution was found and the BSF [US-backed Syrian Border Security Force] was set up.”

What is perhaps most telling is that the final arbiter of Erdogan’s decision was not Washington, but Moscow. Tillerson’s policy speech seemed a day late and a dollar short on the gravity of US-Turkish differences over the SDF. US objectives in Syria, including stabilization of towns liberated from IS, return of refugees and containment of Iran, to name a few, will all be compromised or complicated without coordination with Turkey and Russia.

In Ankara’s score, the time for speeches and talking had long passed. So while Tillerson made his appeal to Cavusoglu in Vancouver, the meeting that day in Moscow that really mattered was between Turkish Chief of General Staff Gen. Hulusi Akar and Hakan Fidan, the Turkish head of the National Intelligence Organization. Russia soon after began withdrawing its forces from the areas targeted by Turkish forces. A statement from the Russian Foreign Ministry expressed “concern” about the situation, and called on the parties “to show mutual restraint.” Meanwhile, Russian, Iranian and Turkish diplomats met to prepare for the Syrian National Dialogue Congress to be held in Sochi Jan. 30.

Metin Gurcan’s analysis was ahead of the curve on the motivations and possible consequences for the Turkish operation. “If Ankara seeks Moscow's approval, it might get it, because Russia badly needs a military victory for domestic political consumption,” Gurcan writes. “In that case, Moscow might give the go-ahead for Turkey to launch a brief operation with limited targets. Moscow might also insist that Turkey hand over Afrin’s governance to [Syrian President Bashar al-] Assad after keeping Turkish troops in the area for a short time.”

While US-Turkey relations are in free fall, Russia-Turkey coordination over Syria is not without friction, including the Kremlin’s disappointment with Ankara’s fulfilling its obligations in Idlib, which was the subject of this column last week. Gurcan concludes, “In 2017, Moscow had offered Ankara an opportunity to clear the area: Let the radical elements in Idlib leave the city center unharmed or unarmed. But Ankara was late in responding, and its field performance did not meet Russian expectations. It's therefore possible that — dissatisfied with the Turkish performance — Russia gave the green light to the Syrian army to launch attacks north of Idlib. In other words, Russia believes that Ankara has been stalling in fulfilling its promises to Moscow that it will reshape the Sunni opposition west of the Euphrates to become a coherent actor and separate Sunni armed groups from the radical groups affiliated with Hayat Tahrir al-Sham. An Afrin operation could endanger the sensitive arrangements Russia tried so hard to achieve west of the Euphrates.”

In that same August column, “If no sanctions relief is forthcoming [from the United States], Putin will have little interest in carrying Trump’s water at the expense of his regional ties. Russia might therefore undertake an outwardly passive and inwardly supportive role that allows the regional parties to take the initiative against the Syrian Kurds or others. Moscow might see that as the winning hand. For the United States, the Russian card should be played carefully, with full appreciation that Tehran, Ankara and Damascus will all have their say.”

UN officials are warning of the impact of Syrian government attacks on Eastern Ghouta and Idlib, which are considered “de-escalation zones” according to the Astana process, led by Russia, Iran and Turkey.

"Since mid-November 2017," according to the UN News Centre, "the estimated 393,000 people in eastern Ghouta have been subjected to airstrikes, shelling and bombardment on an almost daily basis by Government forces and their allies. Rockets fired by armed opposition groups in eastern Ghouta into residential areas of Damascus have reportedly further aggravated the situation. In southern Idlib and northern rural Hama, where fighting between government forces and armed opposition groups — which control a majority of the Idlib governorate — has escalated since December, over 200,000 civilians have been displaced and numerous people have been killed."

Ahmed al-Ahmad, the Syria media coordinator of the Turkish Red Crescent, told Khaled al-Khateb, “The wave of displacement started in early December 2017 and got more disastrous since the first day of 2018. The Red Crescent has established two camps to accommodate the displaced: the You Are Not Alone Camp, which can accommodate up to 5,000 people, and a second one that can accommodate up to 20,000 displaced people. The two camps are located near Bab al-Hawa in the north of Idlib. … We are planning on building more camps near the Syrian-Turkish border in northern Idlib to accommodate the vast number of displaced people, estimated by the Red Crescent at more than 300,000, mostly children and women.”

Khateb reports separately that “the local council in the city of Akhtarin, in the northern Aleppo countryside, announced Jan. 2 that it would confiscate the property of people and families who had joined the ranks of the Islamic State (IS) or fought alongside regime forces. The decision took immediate effect. The money generated will go toward the orphans created by the war and their caregivers. … The council's decision is not likely to be imitated by other areas in the countryside of Aleppo, given its conflict with Sharia provisions. This is the case even though the considerable numbers of people from the cities and towns in the area of Operation Euphrates Shield who fought with IS and the regime are yet to return, and perhaps never will, most likely out of fear."