Israeli settlers use cemeteries to gain foothold on land

The decision to bury terror victim Rabbi Raziel Shevach in the unauthorized West Bank outpost where he lived serves the settlers’ agenda of establishing facts on the ground. 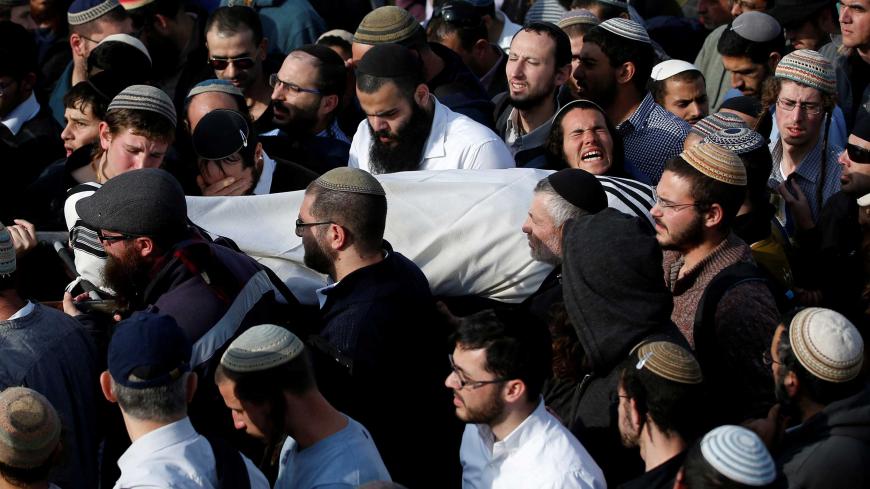 The funeral procession of Rabbi Raziel Shevach, who was killed Jan. 9 in a shooting attack in the West Bank, took place in the illegal outpost of Havat Gilad. The settlement had no cemetery until the rabbi's death, but in a hasty decision made together with the rabbi's family, the settlers decided to prepare a plot and bury him in the unauthorized settlement where he lived.

By doing this, the settlers of Havat Gilad established a new fact on the ground. Not only had they created the outpost, which grew from a small farm into a settlement that is now home to 40 families, their decision to act rashly and establish a cemetery in the settlement makes any future evacuation of the settlement virtually impossible.

"We have decided to bury my beloved husband here, because we feel that this is our task," Shevach's widow told journalists, who visited her in her home during the shiva, or mourning, period. "We want to leave the strong tent peg that he planted here. We want to leave it here so that it will forever be impossible to uproot it. … We made a big sacrifice. We want to come away from this feeling as if the government feels it owes us a home. We deserve to have the settlement authorized rather than fighting over every clod of earth."

Havat Gilad was established in 2002, during the second intifada. Its founder, Itay Zar, intended it to be a response to the murder of his brother Gilad in a shooting attack by Fatah members. He claims that his father Moshe Zar purchased the land in the late 1970s. A few months after the farm was established, Israeli security forces attempted to evacuate it. Residents from neighboring settlements showed up to prevent the evacuation order from being carried out. Ninety people were injured during these events, and the settlement was eventually evacuated. But the settlers did not give up. Soon after the original evacuation, they returned to rebuild the outpost.

The situation that emerged over the years made it impossible to evacuate Havat Gilad. Successive Israeli governments not only ignored the settlement's expansion, they even supported it. The first senior figure to visit the site and grant it authorization, at least in the public's eye, was former Knesset Speaker Reuven Rivlin, who is now president of Israel. Rivlin visited the illegal outpost in 2012, met with the founder and the other residents, who joined him there, and heard from them about what they described as the difficulties they faced in settling the Land of Israel. They talked about access roads, security and basic services they needed to make their settlement fit for habitation, and he took their side. "Anywhere that Jews live on lands that were purchased at full price, it is incumbent upon the government to assist in granting authorization for their homes and providing the appropriate infrastructures," he said.

Those infrastructures were provided over time. Now, with the murder of Shevach, a cemetery was established there too, advancing formal government recognition of Havat Gilad. It happened in the same way that the Jewish settlement in Hebron gained official recognition after the 1967 Six-Day War. In Shimon Dotan's documentary film "The Settlers," Sarah Nahshon, a leader of the Jewish settlement in Hebron, talks about her decision to bury her infant child in the ancient Jewish cemetery in Hebron, despite a government ban. In the film, she goes into moving detail about how her child died of sudden infant death syndrome. She responded resolutely that she would bury him in Hebron in order to prevent the city from ever being returned to Arab rule. The funeral procession left the Kiryat Arba settlement nearby, but was soon blocked by the army. Undeterred, she took her dead child in her arms and started walking to the cemetery, followed by a group of 10 settlers (the number needed for the Kaddish prayer). When an officer tried to convince her to bury her child in Jerusalem or Kiryat Arba, she refused.

While the incident was still unfolding, it went right up the chain of command, finally reaching then-Minister of Defense Shimon Peres. Although he hesitated for a few minutes, there was no way he could stop a mother who was carrying her dead infant in her arms while insisting that her baby be buried in "the sacred land of our forefathers." Apparently, Peres did not fully realize the impact that his rash decision would have. "Let her bury her child in the cemetery in Hebron," he ruled. The rest is history.

No one hesitated for as much as an instant in the case of Havat Gilad. The leaders of the religious Zionist movement appeared in the illegal settlement's newly dedicated cemetery, headed by Naftali Bennett, the minister of education and chairman of HaBayit HaYehudi. Not only did Bennett refuse to say a word about how the settlers decided among themselves to create the cemetery in the settlement, he even encouraged them to continue building there and have more and more children to strengthen all the settlements. "We have to build, bear children and establish settlements. Now it's the government's turn to do its job." Then he called upon the prime minister to convene the security Cabinet and to grant the settlement official recognition in Israel.

With that, Bennett planted another peg, ensuring official recognition of the illegal settlement. He was not alone either. Right after the murder, Defense Minister Avigdor Liberman announced that he instructed his ministry to provide assistance to the victim's family and to all the residents of Havat Gilad. Furthermore, he instructed the Defense Ministry staff to look into granting the settlement official authorization. Minister of Justice Ayelet Shaked (HaBayit HaYehudi), who is tasked with defending the rule of law, offered a similar reaction. "Our response," she said, "will be to grant official recognition to the settlement of Havat Gilad."

It looks like no one really thought about the important questions, which any nation under the rule of law should ask. Is granting legal recognition to a settlement in the West Bank that is home to 40 families, who took the law into their own hands while putting themselves at risk, really in Israel's interest? In fact, this could be another case of Israel surrendering to the settlers, who just turned a horrific terrorist attack in which a father of six was killed into yet another means of getting their way.