The Turkish military is set to recruit 8,000 women in an effort to bolster its image and defang Kurdish militias' association with female empowerment. 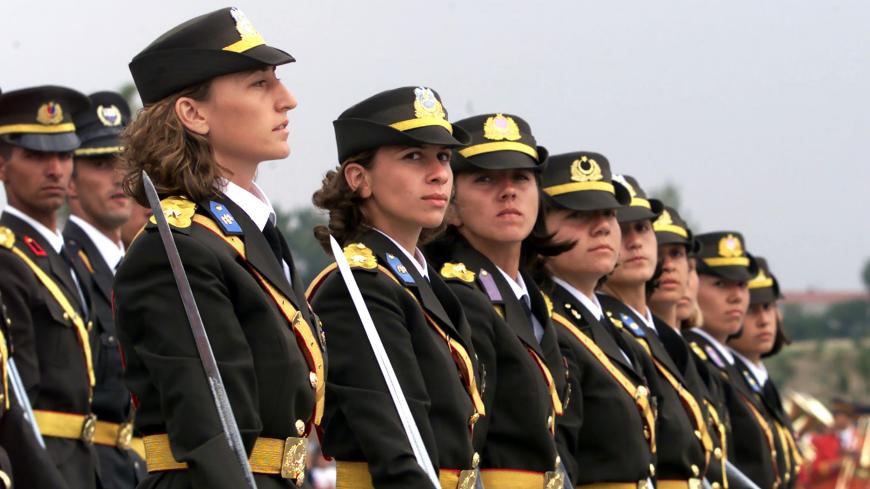 The outlawed Kurdistan Workers Party (PKK) has been fighting the Turkish army initially for independence and later for Kurdish self-rule inside Turkey for the past 33 years. One of the hallmarks of the group is that it has succeeded in prizing away thousands of women from the clutches of patriarchy and into the battlefield.

Now the Turkish army, it seems, is preparing to respond in kind.

The Turkish Gendarmerie Command has announced that it will recruit 8,000 women whose duties will include combating terrorism, which is shorthand for fighting the PKK, and defending the country’s borders. Ladies who are older than 26, shorter than 1 meter 64 centimeters or have a criminal record need not apply.

The move is set to dramatically boost the share of women in the gendarmerie forces from its current 1% to 10%, and within the Turkish Armed Forces as a whole. As of 2013, the last year of official data, there were only 1,345 female commissioned officers and 370 noncommissioned ones out of a total of 723,741 military personnel in Turkey.

The private NTV news channel reported that female commandos will be trained alongside their male peers and deployed to freezing mountain terrain in eastern Turkey as well as to the heavily Kurdish southeast, where the conflict between the PKK and Turkish security forces is concentrated.

Female officers are viewed as an effective tool in the government’s campaign to win Kurdish hearts and minds as they can interact with women in a way that men in the deeply conservative Kurdish provinces cannot, especially if they are not locals.

In February, the government announced a tectonic shift in the armed forces’ dress code when it said women who wear the Islamic-style headscarf could finally join its ranks.

Turkey’s military has long been viewed as the guardian of the secular republic founded by Mustafa Kemal Ataturk 94 years ago, a role that the generals enshrined in the constitution they drew up following their last hard coup in 1980. For Turkey’s beleaguered secularists, the move amounted to a final nail in Ataturk’s coffin. Many others, including some feminists, argue that the easing of once rigid bans on the headscarf allows pious women to seek work without seeming to compromise their morals.

In a further sign of how times have changed, it emerged last week that Turkey's Chief of Staff Gen. Hulusi Akar was sponsoring the construction of a mosque in his native Kayseri. The city's Mayor Mustafa Celik revealed that the mosque would house up to 750 worshippers and be engraved with Seljuk motifs. In the old days, getting ahead in the military involved burnishing one's secularist credentials by, among other things, imbibing glasses of raki and dancing the polka with one's bottle-blonde spouse.

In Syria, a PKK affiliate called the Women’s Protection Units remains the object of fawning in the Western media due to its steely courage in the US-led coalition’s battle against the Islamic State. Syrian Arab women who are being trained by Turkish police in the so-called Euphrates Shield pocket of territory in northern Syria, which is under Turkish-backed rebels' control, have elicited less excitement. There are at least 90 of them and photographs shot during the newly minted policewomen’s oath-taking ceremony last October suggest most of them cover their heads.

But be they Turkish, Arab or Kurdish, and even in combat gear, women continue to be suppressed across the Middle East. A Western diplomat with intimate knowledge of the region who bemoaned the “irritating fetishization of the Kurdish female warrior everywhere in the Western press,” told Al-Monitor, “Just because women fight and kill and [are] killed alongside men doesn’t mean that they are making Kurdish society feminist,” because when they come home, they return to doing “all the traditionally female gendered work as well.” The same will likely hold true for the Turkish gendarmerie’s female inductees.