The arrest order Turkish prosecutors issued for Graham Fuller, a former CIA official, appears to be a Russian-Turkish joint production. 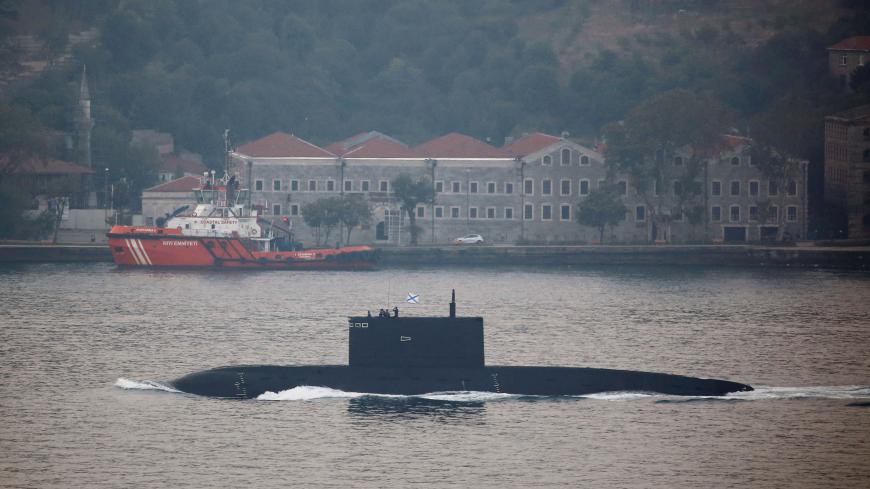 The Russian Kilo-class diesel-electric submarine Krasnodar sets sail on the Bosporus on its way to the Black Sea during a hazy morning, in Istanbul, Turkey, Aug. 7, 2017. Many analysts say that Russia, through the use of subterfuge and propaganda, is seeking to help unmoor Turkey from the West and more into Russia's sphere of influence. - REUTERS/Murad Sezer

On Dec. 1, the Istanbul Chief Public Prosecutor’s office issued an arrest warrant for Graham Fuller, who was identified in Turkish media as a “former CIA official,” or, more provocatively, as a “CIA agent.” Fuller was accused of “attempting to overthrow the government of the Republic of Turkey and obstructing the missions of the Republic of Turkey.” He was blamed, in other words, for having a hand in the failed July 2016 coup attempt against the government of President Recep Tayyip Erdogan.

For anyone who has a sense of the real world these were outlandish claims. Fuller had indeed worked for the CIA in the 1980s, as national intelligence officer for the Near East and South Asia. But he retired from the CIA in 1988, and joined the RAND Corporation, a think tank, as an analyst. In 2006, he retired from that job and moved to Vancouver, Canada, to join Simon Fraser University as an adjunct professor of history. Now 80 years old, he has lately devoted himself to writing books and novels, along with a political commentary blog. He has voiced strong criticisms against Islamophobia in the United States, argued that countries such as Turkey are entitled to a foreign policy independent of Washington, and in fact supported the successive Erdogan governments for a long time until he became disappointed — just like all other Western observers who had better hopes for Turkey. It is true that Fuller has expressed sympathy for the Gulenists, even after the coup for which they are widely blamed, but that seemed more as a result of successful public relations work by the movement.

So, why did Turkish prosecutors decide that this 80-year-old scholar living in Canada was involved in Turkey’s coup attempt?

One answer is that Fuller has always been a favorite figure in the abundant conspiracy theories about CIA plots related to Turkey. The Turkish left has particularly hated him for promoting “moderate Islam” instead of rigid secularism, and his writings on the Kurdish question have irked nationalists as well.

Yet this time there is a seemingly more solid source than those usually found in Turkey’s conspiracy theories: Alexander Dugin, the ultranationalist Russian intellectual famed both at home and abroad as a key ideologue of the Putin regime — or “Putin’s Rasputin.” Just a week before the arrest order on Fuller, Dugin had appeared on a pro-government Turkish channel live from Moscow, and said Russian intelligence agencies had “concrete evidence that CIA agents engineered the failed coup attempt.” He also added, proudly, that this “concrete evidence” was presented to Turkish authorities.

We don’t know what exactly Russian intelligence presented to the Turks. But we may get an idea from pro-Russian conspiracy theorists such as F. William Engdahl, an American based in Germany who told a right-wing Russian think tank in August 2016, “Former vice chairman of the National Intelligence Council of the CIA, Graham E. Fuller, was on Princess Island, 20 minutes from Istanbul, the entire night of the coup, monitoring developments until the coup collapsed.”

However, real world facts show Fuller was not on this island during the coup; he points out that he has not visited Turkey in the past five years and was speaking to a group of 100 people the night of July 15, 2016. However, another American scholar, Henri Barkey, was indeed at Buyukada, one of the Princess Islands, that night. There was an academic workshop at a hotel there and the topic was Iran’s regional role. Yet “sensationalist conspiracy theories promulgated by Turkey’s pro-government press,” as Barkey explained in a piece in The New York Times, have depicted the conference as “something far more nefarious.”

The addition of Fuller to this scenario seems to be a Russian-Turkish joint production. At the very least, Turkey’s pro-government press projected the “concrete information” about this matter to Dugin’s TV interview. In the same interview, Dugin also defined the American military base in Incirlik in southern Turkey, as one of the headquarters of the coup, and called on Turkey to rethink its alliance with the United States.

And all this seems to be just one of the many examples of “Russian meddling” in Turkey that has been going on since the failed coup attempt. Russian propaganda sources are trying to drag Turkey further away from the West, by further convincing an already paranoid Turkey about the CIA’s nefarious plots. Other examples, which I reported in Al-Monitor, include a phony article supposedly written by a retired US ambassador depicting the Ecumenical Patriarchate in Istanbul — a theological rival to the Russian church — as a “CIA Trojan horse” that helped organize the coup. The other case was another phony article supposedly written by Zbigniew Brzezinski blaming the CIA for the “grave mistake” of organizing an unsuccessful putsch in Turkey.

While Russian propagandists ply the Turkish public and government with these messages, a Turkish “Russian lobby” made up of former-Marxists-turned-nationalists is amplifying this information. A rising element in the bureaucracy and media, these “Eurasianists” are calling for a complete breakup with the West: disbanding the American military base in southern Turkey, leaving NATO and cutting all the ties with the European Union — and, in the end, becoming a “Russian satellite,” as it would have been called during the Cold War.

Moreover, Turkey itself is going through a perfect storm that makes the Russian option increasingly attractive. The Gulenist involvement in the coup attempt was not a myth, as I have argued elsewhere, and Ankara has a legitimate case there. But Turkey's extremely crude and cruel reaction to the coup — with endless purges that have turned into a witch hunt par excellence — makes Turkey's case much less convincing. This helps Gulenists still freely operate in the West, and this makes Turks only more convinced that Gulenists are nothing but puppets of Western cabals. On top of all this, the “politically motivated corruption investigation” the Gulenists launched against the Erdogan government back in December 2013, as I defined it then, is now partly going on in New York, pumping only more anti-Americanism into the pro-Erdogan universe.

Russia certainly did not create the complex dynamics that are dragging Turkey away from the West. Yet Russia certainly seems to be taking advantage of the situation. The Russians' goal, according to an article by experts Henry Meyer and Onur Ant for Bloomberg, is “luring Turkey away from NATO and creating a ‘Russo-Islamic pact’ that includes Iran.” The writers said this is part of Putin’s strategy of “unwinding the U.S.-led global order.”

Normally you would expect to see the United States getting alarmed about all this. But the current US leadership seems worried about neither the future global order nor the growing Russian influence in it. That's why this is a very perfect storm. In the middle of it lies Turkey, which is dragged away further every day from its nearly two-century-old aspiration to be a part of the liberal West, into the uncharted waters of the illiberal East.