The Egyptian government ceased financial transactions by paper checks this month and implemented a new electronic payment and collection system, although only 10% of citizens have relationships with banks. 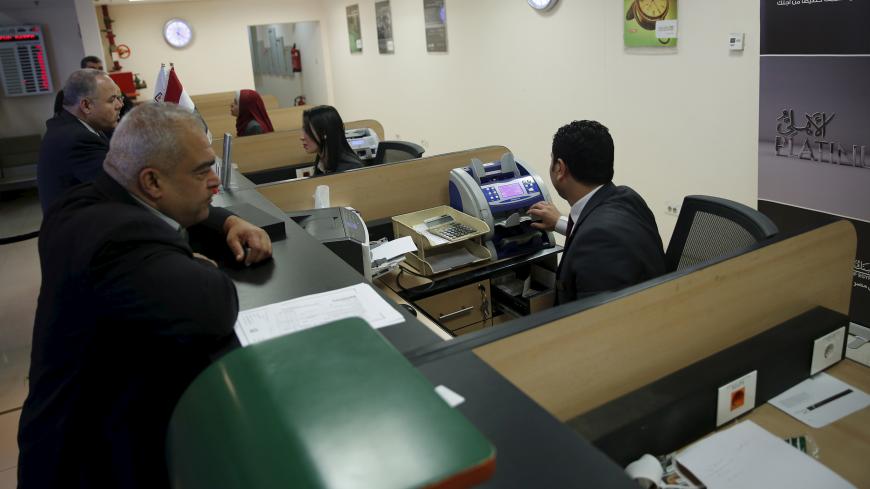 Customers are seen at the National Bank of Egypt, also known as the Al Ahli Bank, in Cairo, March 10, 2016. - REUTERS/Amr Abdallah Dalsh

CAIRO — On Nov. 26, the Egyptian Ministry of Finance issued a statement reiterating that after Friday, Nov. 29, all government institutions would stop processing paper checks drawn on the Central Bank of Egypt. Instead, as of Dec. 1, all state financial transactions would be carried out using electronic payment and collection through the Government Fiscal Management Information System (GFMIS).

The shift, which will significantly enhance transparency and counter corruption, represents a major step toward financial inclusion, which the World Bank defines as “individuals and businesses hav[ing] access to useful and affordable financial products and services that meet their needs — transactions, payments, savings, credit and insurance — delivered in a responsible and sustainable way.”

Salah Eddin Fahmy, a professor of economics at Al-Azhar University, told Al-Monitor, “The Ministry of Finance issued orders in August to all ministries and government agencies to stop dealing with paper checks as of Dec. 1. In turn, these ministries and agencies called on all of their stakeholders in the private sector to adjust their structures, according to the new orders.”

Fahmy added, “The Ministry of Finance’s decision aims to achieve financial inclusion required by the International Monetary Fund (IMF). Christine Lagarde, head of the IMF, had called on Egyptian officials to disseminate banking culture among citizens. According to the report of the IMF mission to Egypt, only 10% of citizens have relationships with banks, which means that the culture of financial inclusion does not exist in Egypt.” The shift in payment and collecting methods is one of the IMF's conditions for a $12 billion loan package for Egypt.

According to Fahmy, use of the GFMIS will significantly improve transparency and curb corruption by tracking electronic transfers to reveal the identity of those taking advantage of the government sector for unlawful enrichment.

“This method will prevent government employers from asking suppliers for bribes in return for completing transactions to pay suppliers their entitlements in due time,” Fahmy said. “The system’s database will show the dates of invoices sent by the suppliers and the amounts due to them without any official having to write a paper check by hand.”

Ayman Fathi, general manager and board member of the Rosa el-Youssef Foundation, a major book supplier for the Ministry of Education, told Al-Monitor that the new system has greatly facilitated financial transactions. “The ministry now transfers the amounts due to a bank account specified by the foundation,” he said. Fathi explained that the foundation still sends a representative to the ministry to obtain a paper record of the payment orders the ministry sends to the banks. The foundation also of course receives statements of accounts from its bank. Fathi said the new system saves time and effort and ensures safer financial transactions.

He also argues that the security of the electronic system can increase government revenue by encouraging industries and companies in the informal sector to regularize their situation — i.e., obtain a commercial registration number and bank account — perhaps take advantage of government services and benefits or providing services. Fathi stated, “This will increase tax revenues, and consequently state revenues, and reduce the Egyptian budget deficit, which hit around 320 billion EGP [around $18 billion] in 2016/2017.”

This system improves the government's control of financial accounts, prevents withdrawals exceeding budget allocations, and saves time and effort in drafting profit and loss accounts. In this regard, the Ministry of Finance can be informed daily of the expenses of each government institution, intervene and issue corrective directives when necessary, assemble an accurate historical database on expenses and incomes for all public administrative units and facilitate the process of drafting the performance-based budget and program budgeting.

Former Finance Minister Fayyad Abdel-Moneim told Al-Monitor that he is optimistic that this long overdue shift will be a success, noting the preliminary steps taken by the ministry to support the system's implementation. He noted that a remarkable 61,000 government accounts with the Central Bank had been closed.

“This step aims to achieve fiscal consolidation and to have one account per ministry,” Abdel-Moneim explained. “The new system will allow establishing a unified account chart. All this will lead to the integration of the financial information management system within the electronic payment orders system.”

Abdel-Moneim added, “A large number of computers required to implement the system were procured along with programs to train employees in this regard. Additional landlines were also provided to secure internet connections. The system was implemented as a first step in revenues-related departments, such as the departments of general taxes, customs, and property taxes.”

With the implementation of the new payment system, Amru al-Gohari, undersecretary of the parliament's economic affairs committee, is calling on banks to reduce their fees and commissions, such as account opening expenses, transfer fees, statements of account fees, cash withdrawals, collection commissions, and so on. According to him, banks in Egypt charge high commissions compared to those in other countries that have implemented electronic systems. All entities and individuals are now only able to conduct financial transactions with the government through bank accounts.

“To attract the informal sector, valued at an estimated 1.6 trillion EGP [around $89 billion], the government should simplify procedures for obtaining business permits and licenses and reduce the cost,” Gohari said. “[Financial inclusion and ease of financial oversight] also requires a number of tax exemptions and facilitation, and not only the application of an electronic payment and collection system,” Gohari said.

MP Basant Fahmi, a member of the parliament's Economic Committee, told Al-Monitor, “The use of paper checks between government institutions and companies and individuals has generated major problems. In case the check is lost, the owner must file a report with the police department and then resort to the judiciary to get another check in place of the lost one. It is a long journey of suffering for suppliers working with government facilities. In some cases, the signature of the check is not fully identical to the signature authenticated by the bank. This forces the supplier to go back to the government agency to have another check issued. This process wastes the efforts and time of suppliers working with the public sector, causing many of them to refrain from dealing with the government.” Fahmi explained that owners of checks with maturity dates after Nov. 30 must approach the concerned government authority to have their checks cashed on the due dates.

On Nov. 29, the Ministry of Finance issued Periodic Letter no. 119 of 2017, which along with prohibiting officials from signing paper checks, effective Dec. 1, provided for forming committees to destroy all unused checkbooks in government institutions as of Nov. 30.