US sticks by Lebanese army despite Hariri resignation 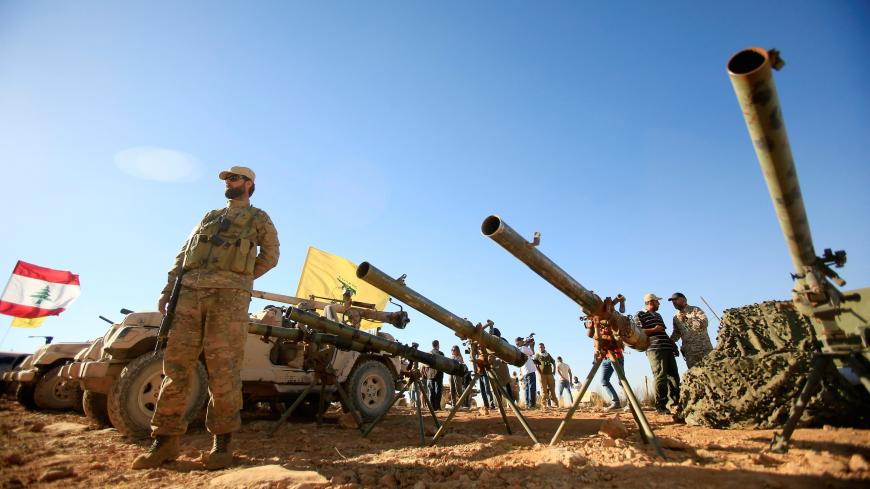 A Hezbollah fighter stands in front of anti-tank artillery at Juroud Arsal, at the Syria-Lebanon border, July 29, 2017. - Reuters/Ali Hashisho

The Donald Trump administration is standing by the Lebanese army despite Prime Minister Saad Hariri’s shocking resignation over the weekend.

Hariri announced his decision to step down during a visit to Saudi Arabia, citing threats from Hezbollah and its Iranian patron. The move raises concerns about US support for the Lebanese Armed Forces (LAF), which critics worry is too close to the Shiite militia.

“The United States expects an orderly political process in Lebanon and will remain supportive of the legitimate institutions of the Lebanese state,” Pentagon spokesman Maj. Adrian Rankine-Galloway told Al-Monitor.

Hariri’s resignation comes less than a week after US Ambassador to Lebanon Elizabeth Richard announced the first delivery of Super Tucano attack aircraft to the Lebanese military. During an Oct. 31 event at Lebanon’s Hamat air base, Richard said US support for the Lebanese military over the past year totaled $160 million from State Department and Defense Department accounts.

Two months earlier, on Aug. 14, Richard had announced the delivery of eight Bradley fighting vehicles to the Lebanese military. At the time, she said the United States over the past 12 months had provided the Lebanese military with 40 howitzers, 50 armed Humvees, mortar systems and more than 5,000 small arms, including machine guns, grenade launchers and assault rifles.

“Our support to the LAF, including our Oct. 31 announcement, will continue,” a State Department official told Al-Monitor today.

The show of support comes even as Trump’s State Department cut down its annual foreign military financing grants to Lebanon from $105 million to zero in the budget request for the fiscal year that began Oct. 1. Still, US officials insist that neither budgetary turmoil nor political intrigue will derail efforts to outfit Lebanon’s military; this funding has totaled more than $1.4 billion since 2005.

“The administration is committed to combating threats to Lebanon and the region, including [the Islamic State] and other terrorist organizations, and maintains the flexibility to respond with any combination of [State Department and Defense Department] programs,” another State Department official told Al-Monitor. “We are confident that we can work closely with the Department of Defense to ensure we are able to address the most urgent needs for the LAF.”

The US government could potentially draw upon a new $850 million Defense Department program to provide security and counterterrorism assistance around the world, as well as a Pentagon effort designed to build up foreign military capacity. A provision in the House version of pending defense legislation would also allow the Pentagon to allocate money to strengthen Lebanon’s military from funds budgeted to counter the Islamic State. Lebanon is also a priority country for receiving assistance through a $200 million global train-and-equip program for countries to secure their borders and fight terrorism.

Lawmakers who supervise foreign aid said they were keeping an eye on the situation.

Former US officials pointed out that US support for the Lebanese Armed Forces has continued throughout a series of political crises in recent years. Washington has provided more than $800 million in training and equipment to the Lebanese military since Hariri was first forced from power in 2011, after Hezbollah and its allies left his political coalition.

“Political instability is a time-honored tradition in Lebanon,” Mara Karlin, a former deputy assistant secretary of defense during the Barack Obama administration, told Al-Monitor. “The bigger questions would be what does this instability mean for the Lebanese military? Is it still using materiel appropriately and in line with efforts to ascertain government sovereignty? Is it still taking on bad actors?”

But the effort to outfit countries such as Lebanon with security assistance could still change, experts say, given the larger foreign aid shakeup underway during the Trump administration. Strengthening ties between the White House and Saudi Arabia as Crown Prince Mohammed bin Salman tightens his control in the kingdom is another wild card.

Foreign military financing “to Lebanon has to be reviewed in its entirety given recent events between Lebanon and Saudi Arabia,” said Theodore Karasik, a senior adviser with the Gulf State Analytics consultancy and an adjunct senior fellow at the Lexington Institute think tank in the Washington area. “The kingdom has been able to convince America to halt and/or alter FMF [foreign military financing] and other aid before. Given the US-Saudi security nexus against Iran," he said, foreign military financing to the Lebanese military "may not resume until there is a resolution to the emerging Lebanese crisis.”