To compensate for troop reductions in Syria, Russia is deploying an array of corporate-organized mercenaries. 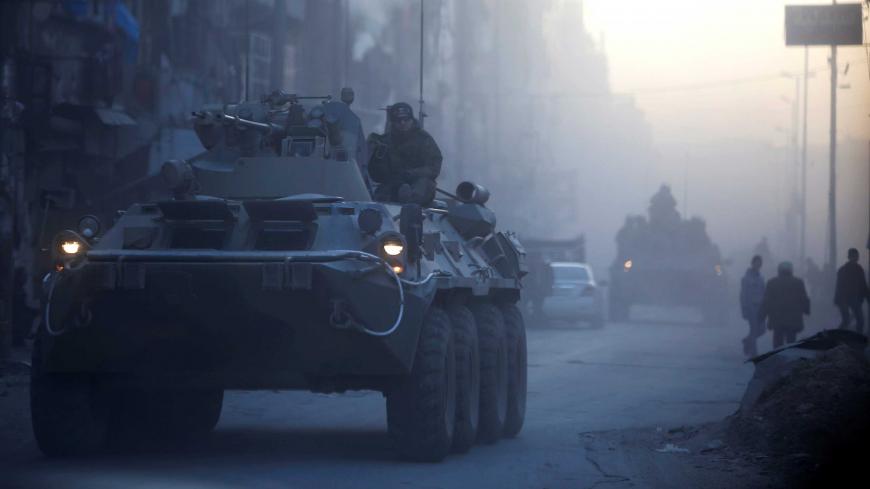 Valery Gerasimov, chief of the Russian General Staff, attracted public attention when on Nov. 23 he said Moscow plans to withdraw some of its troops from Syria by the end of the year, with armed clashes becoming less frequent and negotiations proceeding toward resolution of the civil war. To avoid potential security losses or retreats, however, Russia will outsource the work to private military companies (PMCs) with tactical warfare capabilities equivalent to modern militaries.

It is more accurate to say, however, that Russia will be outsourcing additional work to PMCs, as it has employed them in Syria since 2013. There has been no shortage of reports in the international media since 2016 about Russia's private contractors being killed in clashes.

The first PMC deployed was the Slavonic Corps, fielded by the Hong Kong-based Moran Security Group, a company established by former members of Russia's Federal Security Service (FSB). It is well known that Slavonic Corps has sent hundreds of private contractors to Syria.

In late 2013, about 250 Slavonic Corps and Moran Security contractors were trained in the Syrian city of Latakia and then dispatched to guard strategically important oil fields in Deir ez-Zor. After the group suffered heavy losses in clashes with the Islamic State, Slavonic Corps reduced its operations in Syria.

Company Wagner, another PMC, was established by Dmitry Utkin, former commander of a GRU Spetsnaz, special forces units attached to military intelligence. Wagner contractors took part in the 2014 annexation of Crimea and have fought in the ongoing Donbass conflict, in eastern Ukraine. In fall 2015, when Moscow launched its military intervention in Syria, Wagner deployed more than 2,000 men there. Sources told Al-Monitor that Wagner currently has about 3,000 personnel, including Muslim Chechens, in Syria.

On Oct. 10, the Russian newspaper Moskovsky Komsomolets published an interview with a former mercenary who said Russian mercenaries are paid approximately $2,600 a month, while senior personnel are paid more than $4,000 per month. The Turan Group is the most interesting and mysterious Russian-affiliated PMC operating in Syria. "Turan" means "lands of Turks" and generally refers to Central Asia.

The Turan Group first came to the media's attention in April with reports and photos of its members participating alongside the forces of Syrian President Bashar al-Assad in operations in Hama and Deir ez-Zor. Last month, photos of the PMC actively engaged in combat west of Aleppo and Deir ez-Zor began appearing on social media. A Nov. 28 interview with an Estonian-born Russian national using the pseudonym Ivan shed some light on the group.

Ivan said he was offered a job by Russian-speaking Arabs wearing Hezbollah patches. He was to be paid $15,000 to fight for eight months. He accepted the offer and traveled to Syria via Beirut.

Although the group is mysterious, Turan unit members, most of whom are from Central Asia, are identifiable by the group's blue, red and black patches and flag. The Turan insignia is a hand holding a rifle and three circles. Above the rifle is the inscription “Honesty is a virtue,” attributed to Timur (Tamerlane), founder of the vast Turko-Shiite Timurid Empire (1370-1507), which is symbolized in the insignia by three circles.

The use of Turkic military contractors with Shiite backgrounds gives Moscow a strategic edge in Syria, because these contractors can more easily blend in with Syrian government forces. Their Shiite identity also provides a unifying factor in the fight against Salafi jihadism. Of note, Juma Namangani, a former Soviet paratrooper of Sunni Uzbek origin, had served in Afghanistan, and while there adopted Salafi jihadism. In 1998, Namangani founded the radical Islamic Movement of Uzbekistan and declared jihad against the Uzbek government to establish Sharia there. His transformation has surely not been lost on the Russians.

In short, parallel to Moscow's withdrawal of some of its troops from Syria, it is highly likely to look for opportunities to deploy more PMCs. The weakness of Syrian security forces, combined with Russia's need to downsize its overtasked military in Syria, has left security gaps in the fragile country. Filling these gaps with PMCs is a plausibly deniable, economically feasible, politically viable, sustainable and flexible option for Moscow. In addition, unlike relying on local warlords, armed groups or criminal networks, as in Ukraine and Libya, in Syria using PMCs run by Russian ex-special operations personnel offers Moscow greater command control and combat effectiveness.

With US-based or -affiliated PMCs currently dominating the world market, it may be high time to examine the political effects of pro-Russian PMCs, profit-focused corporations that operate largely outside national and international law and without much concern for the sovereignty and legitimacy of fragile states like Syria.