A new art gallery in the heart of an ultra-Orthodox neighborhood of Jerusalem reflects the sector's changing attitude toward art. 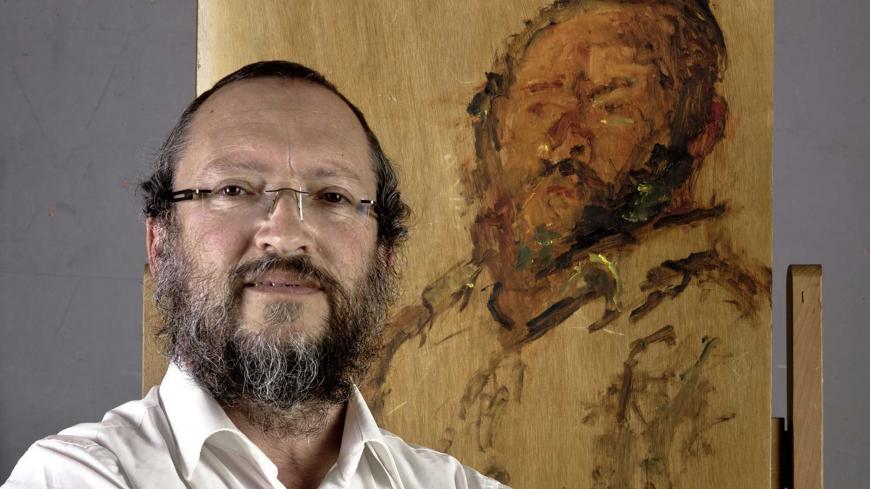 The gallery will be housed in the Schneller Compound, a historic building built in 1860 as a Christian orphanage and later used as a British military base and by the Israel Defense Forces at the founding of the state until 2008, before it was restored and repurposed in recent years.

Until a few decades ago, there was hardly any connection between art and the ultra-Orthodox. While there was ultra-Orthodox art, it was not a means to express a personal perspective or tell a story and certainly not a medium for protest and criticism.

“The pioneers of ultra-Orthodox art are newly religious, among them famous figures such as Ika Yisraeli, Pupik Arnon and Rabbi Uri Zohar, who in 2003 established the Art Shelter Gallery [in Makor Barush] — the first gallery in an ultra-Orthodox neighborhood,” Noa Lea Cohn, a researcher of contemporary Jewish art, told Al-Monitor. She is currently writing a dissertation at Bar-Ilan University on the first wave of newly religious artists in Israel.

There were efforts to bring art to ultra-Orthodox society before then. At the beginning of the 1990s, two pioneering women established a center for amateur art at a community center in Romema, a middle-class ultra-Orthodox neighborhood in the heart of Jerusalem. The center quickly took off and soon high-level art courses were offered there.

Motta Brim is one prominent ultra-Orthodox artist who is not newly religious. He became known in 2001 through a Jerusalem municipality project that distributed concrete sculptures of lions to artists from Israel and around the world to decorate. Brim decided to paint the image of ultra-Orthodox politician Aryeh Deri, now the minister of interior. “It caused an uproar and brought me wide exposure, but at the time I didn’t seek to provoke. I truly saw Deri as a man who led a social revolution with Jews of Eastern origin, and I saw him as a social activist and a very interesting symbol,” he told Al-Monitor.

Brim sees a recent revolution in art in the ultra-Orthodox sector. “Thirty years ago, when I started creating, there was no one to talk to,” he said. “Today there’s a very lively exchange. At one time I never saw ultra-Orthodox people come to exhibits to see art, and today at almost every exhibit you can see the ultra-Orthodox. And I’m not talking about exhibits within the sector.”

Rivka Vardi, the director of Aman, the Bezalel Academy of Art and Design’s ultra-Orthodox branch, told Al-Monitor, “Today it seems much less threatening, but at first not everyone liked the idea of bringing art into the sector." Vardi herself had been following the issue for two decades. “There were a lot of questions. People asked how it comports with Jewish law and religion. But we explained again and again that it doesn’t conflict and you can even make good art at a high level without bumping against the boundaries of the Jewish law,” she explained.

Ultra-Orthodox artists have various specific concerns. Exodus 20:4 says, “Thou shalt not make unto thee any graven image, or any likeness of any thing that is in heaven above, or that is in the earth beneath, or that is in the water under the earth,” taken as a warning against statues, masks and images. There are also social tabbos surrounding a person "wasting" his time in art instead of learning the Torah or providing for his family.

“From my point of view, I didn’t want to make do with mediocre art, and the whole time my dream was to establish Bezalel for the ultra-Orthodox,” Vardi added.

Indeed, after 15 years Vardi's dream came true this year, following several activities that reconciled the ultra-Orthodox sector with arts. “The activity in the neighborhoods proved itself. We have the ‘auto-art,’ which is actually an art pickup truck. It engaged 8,000 participants in 2016,” she said. It's a colorful truck with art equipment and instructors that tours ultra-Orthodox neighborhoods, offering children art workshops. “This project has created a need for art teachers, and so we’ve opened a division for certificate studies some fiver or six years ago. Four years ago, we had another significant jump in activity, when we opened the division for a bachelor’s degree in architecture, art and visual communications in partnership with Bezalel,” Vardi noted.

Women have taken the lead in ultra-Orthodox art, and only women have participated so far in the bachelor's program. Vardi said, “I assume that it is a matter of time and we will see interesting developments [from ultra-Orthodox men] too.”

According to Cohn, Judaism and art are historically linked, and in the present era there is a new relationship between religion and art. “If until now Jewish art was mostly usable art — what we know as Judaica — as opposed to in the modern era. Art no longer appears only in the religious dimension and it has a wider statement that touches on more areas,” she noted. “This division has actually caused art to be viewed as something more neutral and thus today it is easier to connect to even in the ultra-Orthodox sector.”

And what about art as protest and defiance? Cohn prefers to see it as something that connects. “My dream is to establish a museum for Orthodox art and through it to bring the various shades of the ultra-Orthodox sector to other sectors,” she said, “so that it can break boundaries and stereotypes and create understanding by means of art.”

Brim also expressed doubt regarding provocative art. “In my eyes, art is something that builds bridges. It must be comfortable and pleasant,” he said. “Art is an international language and an excellent tool for connection. You can leave controversies and quarrels for Facebook and street protests. With art, I prefer to connect people and not to polarize.”